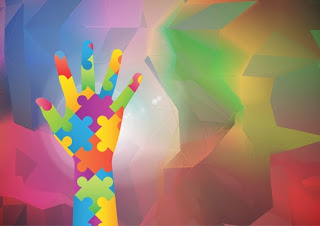 Tomorrow is World Autism Awareness Day, and at this stage in the game, I'm going to bet you're probably aware of it by now. What I wish we'd move to is World Autism Inclusion Day, where we all make an effort to reach out, to communicate, to see things from a different perspective and to encourage compassion and kindness instead of fearmongering and irritation.

So yes, by now you've seen the multicolored puzzle ribbons and hearts, the blue tee shirts and blue light bulbs. Maybe you've even been following Humans of New York as they visited the players and coaches at the World Special Olympics these last few weeks. You undoubtedly know there are a lot of kids with autism, and hopefully you've read enough legitimate medical news to know they didn't get that way by being vaccinated.

Here's what you may not know:


In short, my kid will be my kid, and I will love him as exactly that kid, whether anyone is "aware" of him or not. And he's wholly wonderful - not in spite of his autism - but along with it. Give him a chance, he'll win you over, too.

[P.S. I'm posting this today instead of tomorrow because my daughter turns 18 tomorrow and I plan to pen a rambling, sobbing entry for that instead.]