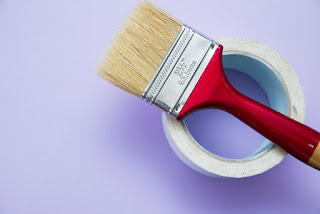 It's time for me to repaint the downstairs bathroom. I know that doesn't seem like a big deal but really, it is.

Years ago, when the ex moved out, I stood there in the rubble surveying the house - or more specifically the things left in the house. There were so many things we'd accumulated during our twenty-plus years together. So many things that were selected together, compromise on, fought over, or begrudgingly given into as a concession toward something the other really wanted to buy.

The ex and I were people with very different tastes when it came to decorating. I like subtle, muted tones on my walls and bright, flamboyant, or dramatic artwork. I could comfortably live in a stonewalled cottage with a decidedly Bohemian flare.


He was all dark walls and sharp angles - he'd wanted to be an architect at one point in his life - and while I could appreciate modern and clean there were many times when the two of us just couldn't come to an agreement on something. I was always the one who gave in. It was just easier.

What we ended up with was the strange mishmash of mostly him with an occasional touch of me. It didn't look cohesive, it certainly didn't flow and the shui definitely did not feng (not that I care about that but you know what I mean).

So that next day after he left and after I cried myself to sleep the night before, I had my first ever kid-free weekend and I felt more than a little bereft. I did not know what to do with myself. I had been a mom for nine years full time without even so much as a day of break. I stood there looking at myself in the mirror of the bathroom downstairs and as I stared at the plain white walls - we'd never bothered to paint them after we've moved in for some reason -  I suddenly knew what I wanted to do.

I headed down to Home Depot, bought two gallons of paint, paint brushes, roller and pan, and then I bought some craft glue and some really beautiful blue and pale creamy colored flat glass “river stones” that I guess people use when they build a mosaic. I am not a crafty person usually but I wasn't sure I could get the old mirror down without leaving a chunk of wall stuck to it and I really didn't feel like spackling and filling all the holes in the wall for me doing so.

I repainted the bathroom a lovely light sky-blue. The varying shades of blue and cream glassy riverstones we're carefully applied with craft glue all around the mirror and also on the glass doors of the small curio cabinet we used above the toilet is a medicine cabinet. Then I bought two beautiful pictures in complementary colors and hung them on the wall.

Sum total for the makeover was less than $60 and I felt like a whole new person or at least the beginning of one, anyway. It was the first time I'd ever painted a room by myself and I did a pretty good job. I loved it. It was completely and totally me. I had painted for hours and when it was done I collapsed on my couch and did something I had never done in my entire history of motherhood: I took a nap. That was amazing too. and even though it still hurt to think of all the things I was missing that my children were doing right then with their father, I started to see a glimmer that told me maybe these kid-free weekends wouldn't be so bad. Maybe I could use them to try and find a little more of myself or build a little more of myself or just plain take a nap - God knows I needed them.

And the rest of the story goes that I finally started using my kid-free weekends to work on that book I'd always sworn I would write. That book and its sequel can be found on bookstore shelves now, and even though the writing career is in a rough patch at the moment I have no doubt that it will get back in the swing again.

The paint in the downstairs bathroom is looking faded now. I'm tired of looking at these blue and cream river rocks on my mirror. It's still a pretty room, but it's not exactly right for me anymore. It's not going to be as easy to paint for me now. I'm probably going to have to ask someone to help me get that mirror down and spackle the walls. I'm going to have to keep the budget right around where it was that first time, but it's a small room so that shouldn't be too tough.

Bathrooms, like their people, evolve. And that's a good thing. I'm not that woman anymore, and I'm ready to let a coat of paint help me figure out who I'm on my way to becoming next.
By Ellie DeLano - April 08, 2019