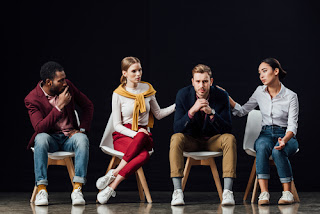 There was an interesting discussion on Reddit the other day about men and the fact that they are rarely complimented, even though they very desperately need those compliments.

Some of the comments in the thread hit you right in the feels. Several guys talked about one compliment they received that they played over and over in their mind for years, sometimes because it came from a special girl, but often because it came at a time in their life when they desperately needed it and also because they have so few instances of genuine compliments that they really stand out.

That's just plain sad. And it shouldn't be. But it's also a very real truth (and one that was repeatedly mentioned on the thread) that men sometimes read waaay more into compliments than they should, and we as women really don't want the hassle of unintentionally leading someone on.


I have a vivid memory of a group of us grocery shopping with a college friend. He was an average-looking sort of guy and the cashier was being standard grocery-store-cashier-friendly as we checked out. He was wearing a cool looking leather jacket, and the clerk remarked simply, "Nice jacket."

Not "Nice jacket, do you live around here?" Or "Nice jacket and it looks really good on you." Or even, "Nice jacket. I have a thing for guys in leather jackets." Just "Nice jacket." He said thanks, we all loaded up our groceries, and she turned back to ring out the next customer without a backward glance at us.

When we got back to the car, we had to spend the next ten minutes talking the guy out of going back in there and badgering the girl for her phone number. He was so very convinced that she was "really into him" based on her one innocuous comment. He reasoned that she must have been flirting or she never would have said it in the first place. It didn't even compute with him that she might have just - y'know - liked the jacket.

I can't tell you how many countless times during my young fast food and retail job days I had men decide customer service was flirting. Maybe it was cluelessness. Or wishful thinking. Or just plain brazen toxic alpha-male bullshit, but God, the number was staggering. Idiots - I was paid to smile at you and talk to you in a friendly way. Maybe even compliment you if I'm getting commission on this sale and it'll make you buy. And worst of all - I'm not allowed to stop being nice if you're being sorta clingy or creepy, because my manager will call it bad customer service.

And those are the no-brainers. The of-course-I'm-faking-nice occasions. How about the times I genuinely give compliments? Once, in my twenties, I told a guy who worked at a nearby store in the mall that he should try to go back to college because he was a smart guy. A few days later he showed up at my store with flowers for me. I was completely taken aback. One of our mutual friends reminded him that I was engaged and getting married in a few months and he replied that maybe I was rethinking the engagement since me and him were "talking."

This next one happened just a couple of years after my divorce. I ran into another recently divorced neighbor at a neighborhood party. He was dressed nicely, so I told him he was looking good when he gave me a hug to say hello. I thought no more of it, and went on to enjoy the party without saying another word to the guy. I heard through the neighborhood grapevine a few days later that someone (another guy in the neighborhood) had remarked I was "acting thirsty" around divorced guy. All based on one compliment.

So all of this is to prove my point - give a guy a genuine compliment, or even an I'm paid-to-be-nice-to-you compliment and you risk him or someone else thinking you're flirting. And that leads to a whole, big, annoying can of worms that most women don't want to open, so they rarely compliment a guy unless they are (a) interested or (b) okay if he thinks they are.

The flip side of this conundrum is that guys predominately only get compliments when a girl is flirting, so it's an easy assumption for them to make (unless she's getting paid to wait on you or sell you something. Come on, guys, how dense can you be?).

How do we find a middle ground? Men need to hear good things every bit as much as women, but women also need to be free to express an opinion without having to weigh every syllable for what might get read into it.

What are your thoughts? Ladies, are you guarded with your compliments? Men, do you wish you heard complimentary things more?