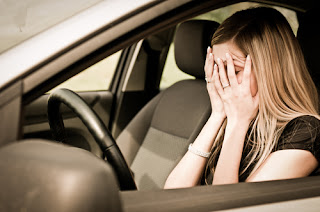 At the gas station last night, pumping gas. Car at the pump next to me has a guy and girl sitting in it. He just finished pumping gas and their windows are down. I barely gave them a passing glance until he started yelling. He was angry. I mean very, very angry. Arms waving, screaming at her over and over again that she was stupid. Really, really "f**king stupid." She was doing her best to make herself as small as possible. And to stifle her tears because he screamed at her for those, too.


I kept my eyes glued to the both of them, so he knew I was watching and she knew I was there. As I finished pumping, he stormed into the convenience store and I walked over and asked her if she was okay. If she needed a ride somewhere. She told me no, then said thank you. "He's got a temper," she said. "He would never hurt me." I told her I lived with a temper like that for decades, and no, he never put a hand on me. But every demeaning word hurts you. Don't kid yourself. She nodded, said "I know, I know . . ."

But she doesn't know, not really. She won't know until she gets away from it. Until the slightest setback in plans, unexpected unfortunate instance or accidentally overcooked meal after a rotten commute home no longer ties her stomach into a nauseating knot of anticipation. Until she slides into bed at night and doesn't have to force her tensed-up muscles to relax in a nightly ritual. When she finds herself laughing over some minor nonsense calamity instead of frantically planning damage control.

I hope she's right and he won't physically hurt her. I hope she heard the truth in what I told her. Most of all, I hope she finds - or better yet, demands what I've got now.
By Ellie DeLano - September 20, 2018