Another Autism Worry - What About The Airport? 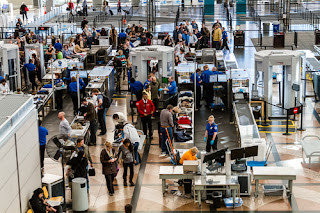 I'm sharing this story today, because it's so perfectly illustrates one of the many scenarios that we as autism parents - and also that our children as people with autism - have to navigate in daily life.

I've flown with David a handful of times now. When he was younger, a simple "My child has autism" was explanation enough for airport security personnel. They let me repeat their instructions to him if necessary, and while they weren't always patient, they didn't make any problems for us either. On a few occasions they would allow David to step out of the line and they'd run a wand over him and send us on our way.

As David's gotten older, and is now taller than me, I've spoken the very first security person (the one at the desk who looks at our boarding pass before sending us to the line). I let them know that David is a person with autism. Luckily enough, that's gotten us sent through the fast-track line more often than not. I say "luckily" because so much of that depends on the TSA agent you get and how well-trained they are.

And that brings me to this story. This family was seeing their adult son - who happens to have autism - off on his flight to Phoenix. Unfortunately his lack of eye contact with the security agent set off her radar and that set up a chain of events that heightened everyone's anxietyThis is a mother's worst nightmare, and I venture to say it was a nightmare for the son as well. Just another day dealing with people who don't know how to deal with autism, and in this case it could have ended disastrously.