Being An Introvert Makes For Difficulty - Married Or Single 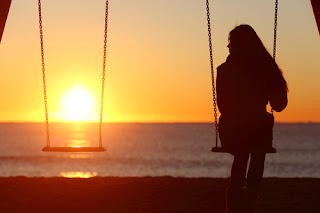 One of the many things that affected our relationship back in my married days was the fact that I was an introvert and married a social butterfly. While my idea of a great evening was being cuddled up on the couch next to him eating food that had preferably been delivered or picked up on the way home from work, his idea of a great night was being out somewhere - a restaurant, a movie, or a bar (not that he was some sort of drunk or anything he just like the festive atmosphere of being at a bar with his friends).

Happy hours were his forté, while to me they were a form of personal torture. First of all, I don't drink much - mainly because I'm a lightweight and I don't especially like the feeling of being drunk. So there I am at a happy hour nursing one drink over the course of however long I'm stuck there, making small, talk standing around because there's almost never anywhere to sit. I don't play pool either - so unless there's a wicked trivia contest going there's really not much to interest me at a bar for more than about half an hour.

I recognized early on that my husband was an extrovert and fed off the energy of other people when he was out socializing. The very things that I shied away from and that I found draining where the things that clicked his "on" switch. So whenever there was a happy hour at work for him or people were gathering at the bar after work to wish someone happy birthday, or if one of his buddies invited him out for a night of bro-bonding, I never told him no. I always actively encouraged him to have time away from me and from the kids and from the house because I knew these were things he needed. Of course, that time away ended up including a couple of girlfriends over the years so maybe I was a little too understanding. That's water under the bridge now.

One of my biggest complaints was that the courtesy was never returned. The ex was always always encouraging me to go out with the women in the neighborhood or with friends from work. I almost never go to work events that are held after hours because quite frankly I've spent eight hours with these people and I want to go home and spend time with my kids and my husband. Even now when I don't have a husband to come home to, I'd still rather go home and just kind of quietly veg in front of Netflix for a while. The Ex, of course, could never understand that - it wasn't how he was wired. You never go out he used to complain, the girls in the neighborhood have invited you again and again when they have girls night out and you almost never go. I try to do something nice for you and tell you to go out and you ignore me and then you complain about how stressed you are.

I actually told him I don't know how many times that what I wanted more than anything was for him to take the kids out for a while - just leave the house for a few hours. Go out and do something, take a hike or take the kids to a movie. Leave me here and let me lay down on the couch and watch TV on a channel I want to watch - preferably one that doesn't have Disney characters on it. Let me read a book in silence,  let me eat an entire container Ben & Jerry's Cherry Garcia and not have to share it with anyone. He never did that. And the truth is if he did I would most likely spend that time cleaning or doing laundry or something like that. But at least I'd be doing it quiet and without people around me constantly demanding my attention and interaction.

So that was a challenge while I was married, and now that I am single it's become even more of a challenge. I am honestly and truly a borderline hermit. I have to force myself to go out and do things. On my kid free weekends, I can sometimes go all weekend long and not leave my house and not have a single phone call or a single person at the door and I'll realize sometime late Sunday night that I'm a little bit lonely and I've got nobody to blame for it but myself.

So . . . those of you like me that don't automatically seek out the social stuff, what's your trick? How do you have an active social life without feeling like it's sucking the life right out of you? I really need to find a better balance before I end up walled in this house like some recluse, peeking out through the curtains as the world goes by. Any suggestions?

Email ThisBlogThis!Share to TwitterShare to FacebookShare to Pinterest
Labels: Dating and Relationships, Life