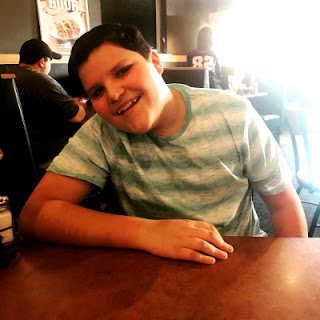 David is now fourteen, and he's taller than me. He’s a good sized kid and built like a bull moose. As he's aged into puberty he hasn't lost a bit of his exuberance. Somehow David utterly disproves the myth that kids with autism are introverted and withdrawn. He is, as always unfailingly cheerful and friendly. To him, a stranger is just a friend he hasn't met yet.

And while that's a wonderful sunshiney way of looking at life, it creates a series of problems - particularly when you have a kid who doesn't easily read or understand social cues. Facial expressions are generally lost on him unless they are extreme. Gentle or subtle hints sail right over his head.

So I've had to previously address this on occasion, and those occasions are getting more and more frequent as David's height climbs higher, his voice drops lower, and he's looking less and less like a young teen and more like a grown man.

For instance last night we were in Target. David has been on a Disney kick lately, and he was singing from one of his favorite Disney movies. He was off in the movie section while I was shopping elsewhere in the store and as I headed back to his section I could hear him down the aisle as he was singing. I've spoken with him before about singing loudly in public and I have to keep reminding him.


As I was rounding the aisle, I passed two teenage girls who were talking about the weird guy in the next aisle. They even wondered aloud if he was some kind of an axe murderer. The word creepy was used more than once. The autism mama bear in me wanted to tell them that if a someone singing Disney Tunes was the most dangerous thing they encountered in their young lives, they were going to have a beautiful existence.  However, I have a teenage daughter myself, and while she loves her brother, it's also fair to say that he embarrasses her a great deal on occasion - especially when he's singing at the top of his lungs in Target.

So we had to talk in the car on the way home about how singing in public bothers some people, and how sometimes people don't know the song that you're singing and the words might seem a little odd or scary to them so it's probably better just to hum it very quietly if you can't stop yourself from singing it.

Then David asked me about summer. One of the perks of my day job is that I get reward points at a local hotel chain for some of the meetings and events that I book there. With those points the kids and I are able to have two to three nights at a hotel at the beach every year. It's something David looks forward to a lot. he asked me if his friends might be there and I had to think back - it must have been 4 or maybe 5 years ago at the hotel, and David wanted to play in the pool. He has always played well with kids that are a lot younger than him simply because of his communication level and his willingness to always be “it”  when it comes to tag or Marco Polo. This particular day there was a group of kids ranging from 5 to about 8 from two different families and they had wonderful, understanding parents who realized pretty quickly that David was a different kind of kid. He played with those kids for hours and they had so much fun together.

And of course, if we go to the hotel this year and there are kids that young playing, I can't let David go over there and ask them if they want to play. He's nearly 15, and as big as he is he looks 18 easily. Parents are going to be looking at him through an entirely different set of eyes now. David doesn't understand this -  and truthfully, David may never understand this.

It's times like this that I feel really sad that we don't live closer to an extended amount of family. David would be that fun older cousin or uncle who can be counted on to play with the kids at any age. He's got to act like  a grown up now, even though he is far from that definition. and inside I don't know that he will ever match that definition. That's part of what makes David so wholly and completely wonderful. And I have to tell him he can't be that anymore - not around everyone. His safety depends on it. I can't have an irate parent  getting him banned from the property, physically attacking him, or calling the police just because he won't give their kids a wide berth. This is going to be a tough and repetitive lesson. I'm going to keep hammering it in again and again and again as hard as it is to see the look on his face when we talk about this -  the confusion as he tries to reason out why I suddenly don't want him to be anyone's friend when I was spent a lifetime pushing him to do exactly that.

Rough lessons, but necessary.
And with each one my soul bleeds just a little.
By Ellie DeLano - April 26, 2018