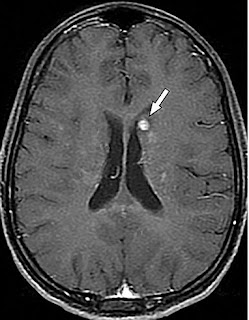 Wish I had a catchier title.

Actually, I wish I had the most mundane, boring title out of some everyday part of my life because that's all the news there is, but it didn't shake out like that. Three weeks ago today, I dodged a bullet - or rather, got grazed by one.

Sunday, March 4th was my last "normal" day, and it was a good one. The kids and I were in Kansas for a family wedding that had taken place the evening before, I was surrounded by loved ones and feeling good. That morning we had a beautiful brunch and someone snapped this picture of us. 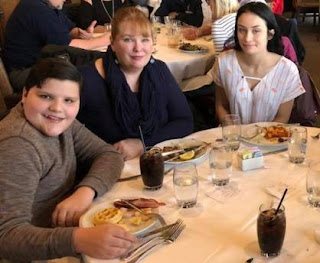 The rest of the day was filled with people dropping by, laughter, and packing, since we were returning home the next day. I zipped up the suitcases, printed off the boarding passes, and climbed into bed.

I had a miserable night. I occasionally have bouts of "restless legs," but this felt like restless body--I could not get comfortable and I moved off the bed to one of the two couches in my brother's basement. Anna was having trouble sleeping as well, and at some point she came out of her room and moved to the couch across from me. Eventually, we both drifted off.

Sometime around five a.m., I woke with my left arm hanging off the couch. I tried to shift position, but the arm wasn't moving well. Thinking it was merely asleep, I sat up and tried to shake some life into it. Then I tried to stand, and realized my left leg was wobbly as hell. I sat down again, and realized with dawning horror that exactly one side of my tongue - the left side - was completely numb.

I woke Anna, and she scrambled up the stairs to wake my sister-in-law, who (luckily for me) is an ICU nurse, and she had me holding out my arm, sticking out my tongue, gripping her fingers, and answering questions. I immediately started second-guessing myself.

Yes, my speech felt kind of slurred. But it was five a.m. and I just woke up. Yes, my arm and leg were weak, but I had been sleeping in a weird way on an uncomfortable couch. Maybe my tongue wasn't that numb . . .we had a plane to catch in a few hours. I hemmed and hawed past the 90 minute optimal window for any sort of clot-busting intervention because I didn't listen to my gut which was screaming something is wrong here! Really, really wrong!

Finally, there was no denying it anymore. I told Anna as calmly as possible that she was going to have to board that plane with her brother, take my car keys, and drive them both home from the airport. I called the airline and let them know what had happened and that my children would be flying without me. I called my ex, so he could meet them on the other end. Then I woke David.

He was confused, and then he was scared. I'm never going to see you again, he cried, and I held him tight and promised him he would. I was coming home, just later. Please, God, let me come home. Please. For my kids.

I hugged my amazing and brave girl who assured me she'd get her brother home safely, I said "I love you" a dozen more times, and I tried not to look at them like it might be for the last time. We got in the car and by the time we got to the emergency room, my lip was numb and my arm was growing weaker.

My sister-in-law works for a large city hospital with a stroke center (lucky me again) and they whisked me right through the E.R. and through a battery of tests at a dizzying pace. Shortly after, I was admitted, and a wonderful neurologist held my hand as she talked me through what happened.

The stroke was centered in my right thalamus, bordering the hypothalamus, and a stroke in that area of the brain is often catastrophic. My symptoms at that point were registering a two on their ten point scale, so I was mild. I could still walk, I could still move my arm and fingers, and my speech was slightly slurred. All in all, I got off easy. They admitted me for observation, and my family saw to it my kids got safely on the plane with plenty of money for meals and airport parking. Anna got them both home, and their father had them from there.

You would think I'd be relieved at this point, but I could see and feel the truth. I'm getting worse. I touched my thumb to my pointer finger, then my middle finger. Ring finger was next, but the pinky wouldn't move. Can you type with four fingers? I work as an executive assistant. I write books and was coming up on a deadline. I ran my fingers through their drill again, and this time, my ring finger missed, along with the pinky.

They told me we had to wait for the swelling in my brain to subside before we'd know the full extent of my impairment, but the good news was my MRI  showed no clots - this was brought on entirely by high blood pressure and that could be medicated. My heart was good and my arteries were clear enough.I passed all the cognitive tests with flying colors, and with some lifestyle changes and outpatient therapy, my prognosis was good for recovery.

My sister-in-law came to see me that night. Have you finally come to grips with the fact that you had a stroke? This young? she asked.

I finally let the storm of tears roll over me. I had a stroke. My kids were without me, my job was without me, and now I couldn't touch my middle finger along with the other two.

Nothing was ever going to be the same again.

Email ThisBlogThis!Share to TwitterShare to FacebookShare to Pinterest
Labels: Getting Healthy, Life, Stroke