The Power Of One Touch

[Special Note: This post originally ran in November of 2011.] 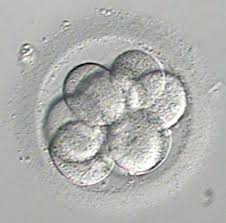 He was eight simple cells when I first saw him, through an electron microscope.

We went to the doctor’s office that day to have the embryos from our invitro fertilization implanted, and the microbiologist asked us if we’d like to look. Would we! I stepped into the back room and stared at the screen where the microbiologist brought up the eight perfect circles that would eventually, hopefully, become my baby. I reached out to touch the outline of those circles and I remember saying “Come on, baby. I’ve waited my whole life for you. Don’t make me wait anymore. Your sister wants to meet you.”

Five months later, I sat in another doctor’s office, my fingers touching and tracing a tiny printout of my baby. My baby boy, I now knew, and I couldn’t stop my fingers tracing the shape of his head, the way his hand reached up like he was already curious about the world around him. My finger lingered on his hand and I remember thinking I’d be holding it someday.

I lay in bed a few months later, unable to sleep. It was that last hellish three weeks before the due date, and sleep came in 20 minute snatches, interrupted by kicks and prods, heartburn and bathroom breaks. My hand reached down to touch my distended stomach, gently pushing, and I smiled in the dark as my little somebody pushed right back, against my questing fingers. “I love you,” I whispered. And I knew he loved me too. I knew it.


A few weeks later, I lay in a hospital bed, holding him close after feeding him, touching the wispy soft hair at the top of his head and just letting my fingers play over his face. His father’s face, but for my chin. I remembered how I’d worried about having a second child. My love for my daughter seemed so all-encompassing. Could you really have enough room in your heart to share that love with another child? Really? And I knew now that I could. I hadn’t realized before that my heart would simply grow another chamber, a sacred place for this new little member of the universe, and it would be uniquely and wholly his own while being no greater or less than the chamber occupied by his sister. From that unique corner of my heart, he would grow to touch all that I was, and ever wanted to be.

Three years later I lay, unable to sleep again, the tears pouring down my face. I went into his room, my hand reaching down to touch his back, feeling him breathe, and I knew that he was slipping away from me, more and more each day. I vividly remember wishing I could push my hand inside him and pull him out of his skin, so I could know what was going on in there. I didn’t know, and I couldn’t fix it. I was completely, and utterly helpless, and that was not acceptable. Not for me. Not for him. I’d call the doctor in the morning.

Two months after that, my hand shook as my fingers touched the buttons on the phone. I waited as the voice on the other end asked me what I needed. My hand reached up to touch my face, wiping the tears away as I said “I think my son might be autistic. His pediatrician thinks so, too. How do we get that tested?”

Three weeks after the testing, I touched the line on the papers, staring at each word as my finger traced it over. Autism. My son had autism. I read on as they detailed out an education plan, applied behavior therapy, occupational therapy, speech therapy. They remarked over and over again that he wasn’t a “typical” child with autism. I laugh remembering that now, because there’s just no such thing. Still, even in the testing, his sense of humor shined through, his affection, his curiosity. They saw all of that, and I was so glad they saw it. I was so absorbed in my reading, I barely felt the touch on my leg. I looked down and there he stood, his hand on my knee. “Okay, Mommy? Okay?” He cocked his head to one side, and waited patiently. I swung him up in my arms, holding him tight and telling him over and over it would all be okay now. It would. I would make it be. I didn’t realize then how much he would make it be.

Last week I went in to read to his class, my fingers touching the words on the book as we read so the whole class could follow along. Not that he needed that – he’s long since memorized the words of all his favorite books. I watched him chat and interact with the class for a few minutes, and then I watched him run off to recess, where he played kickball with his good friends Dustin and Leah. As I stood watching through the window, his personal aide stood beside me and told me how very much working with David has touched her. He’s not like any child she’s ever known, and not a day goes by that he doesn’t amaze her somehow. She said I must be so proud of how far he’s come. I am.

And I still remember when he was eight perfect cells, with the potential to change the world.
By Ellie DeLano - February 22, 2018