It's Okay If I'm Not The Memory Maker 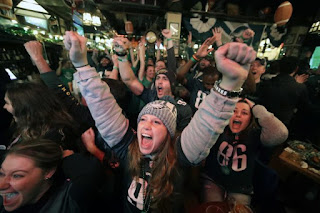 Superbowl weekend was Dad's weekend with the kids - which translated to Dad's weekend with Anna because David had been invited to spend the weekend in the mountains with his best friend. My ex is a die-hard Eagles fan, being a life-long Philly area native, so this was one hell of a weekend to be at Dad's house.

I'm not much of a football person, but I did have the game on in the background while I was writing (mostly because I love Justin Timberlake and I wanted to see commercials). After the win, I was texting Anna and I asked her what the noise level was like over there. She replied that everyone was losing their minds, and she and her Dad and all her friends over there were chanting E-A-G-L-E-S and singing the fight song and it was amazing.
I love it. I love it so hard that she was in the middle of all of that. I texted back: MEMORIES with a big heart emoji. Oh, it was awesome.

And once again, I'm reminded of how far I've come.

When we first split up, it used to ache like an open wound every time there was a milestone that I wasn't a part of. I missed being a family so much, it was painful. On one of their first weekends with their dad, my son lost his first tooth. He called me to tell me and I ooohed and ahhhhed and when I got off the phone I cried for the rest of the night because I wasn't there. I wasn't part of that.

It seems a little over-dramatic to me now but then? Then it felt like I'd been hit by a truck. It wasn't fair that he got that memory instead of me. Then again, none of that was fair. But that's life, and you go on.