What I've Learned In 15 Years Without My Mom 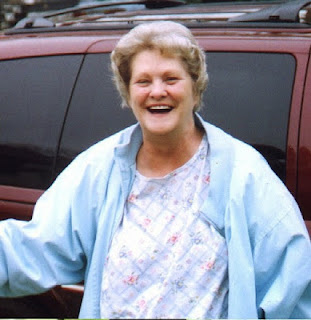 Fifteen years ago tomorrow, on my parent's forty-fifth wedding anniversary, my Mom went to the Emergency Room with what she thought was a bad case of the flu and never came home again.

I got the call on Christmas night. We'd spent the previous few days teetering between hope and worry as she underwent surgical procedures, got worse, got a little better, got worse again. In the wee hours of Christmas night-into-morning, she breathed her last breath.

I was a brand new mother back then -  Anna was twenty months old. David wasn't even conceived yet. And as I stood there watching them lower her casket into the ground on New Year's eve, I knew the person who loved me most in the world was gone. I wasn't sure how I felt about any of that.

My mom and I never did see eye to eye on a lot of stuff. My teen years were tumultuous and she was an extreme sort of hovering parent that I couldn't wait to outgrow. I left home at eighteen, and other than two summers in college and the occasional break between semesters, I never went back again.

Time and distance helped. When she couldn't control me anymore, when her lectures were met with "Mom, I'm not discussing this with you," instead of rancor, we found a middle ground, and we grew. It took me a lot of years to shrug off the resentment and see her for what she was: a woman with flaws whose greatest defining trait was her love for her family. She did the best she could, being who she was.

And she left me with a lot of good memories that I've pulled out from under that resentment. I've polished them off and cherish those memories with new eyes. Remember that time I was in the backyard and she impulsively turned on the hose and chased me around the yard with it? Remember that time I had the measles (dating myself with this one, I know) and she drew dots on my favorite stuffed monkey's face? And stroked my hair while I laid on the couch next to her? Remember how she took the baby spoon from my very frustrated hand and showed me how to get over the top of Anna's tongue so I could feed her a spoon of baby cereal? She was five months old and I was sure when they came to visit that my mom couldn't tell me a single thing about parenting that I wouldn't already know and better. I was wrong.

I see so much of her in my son, of all people. David doesn't know how to hate anybody. He just doesn't have it in him, and neither did she. I often derided her for being such a doormat with people - people who took advantage of her kindness or treated her poorly - and her answer was always confusion. They were her friends. How could she not help them? Love them? Want the best for them?

It's been fifteen years since I lost her, and I know wherever she is, she wants the best for me. I know she loves me, still. She didn't know how not to love. It was her default choice, always.

And in fifteen years, with two children of my own, I know it's the right choice. Always.