The Challenges Of High Functioning Autism 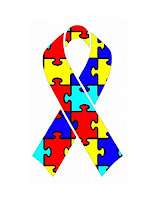 I came across this article last week regarding some of the challenges that face a person with high-functioning autism.

It's very easy to dismiss someone who's higher on the spectrum. They can often hold jobs, do average-to-well in school with some accommodation, and overall don't seem as "disabled" as people who are further down the spectrum.

While that's partly true, that doesn't mean being a high-functioning autistic lets you blend right in and function as an adult without any issues. I speak about this because I've got a son who just turned fourteen. In four short years, my son will be an adult, legally and physically. But his emotional state and social capabilities lag far behind that physical age.
My son will be an adult who:

And unfortunately, in the state of Pennsylvania, high-functioning autism isn't even considered a disability once my son turns 18 and graduates high school. As far as they're concerned, he qualifies for no protective disability designation that would give him certain protections under law, and certain accommodations in the workplace.

Just another day of concerns that swirl around you when you're an autism parent, or a person on the spectrum.