Meet Pablo - The Star Of A TV Show With An All-Autistic Cast! 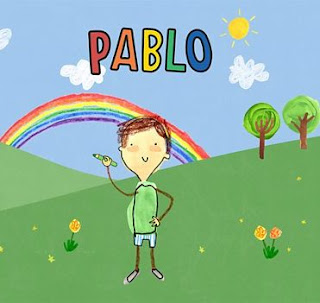 He's a five year-old boy with a fantastical imagination, and a box of magic crayons! He's also a boy with autism, and he uses his tools to turn life's little challenges into big adventures.


The animation, produced by Paper Owl Films, sees the smart, funny and creative Pablo draw imaginary animal friends which come to life to help him handle situations which make him feel anxious, like going for a haircut or on a visit to the supermarket.

And that's not all that's great about this show - this is what the producers (the BBC's CBeebies and RTÉJr) have to say about their creative process:

When making the series, the creators wanted to ensure they reflected the authentic voices of young people on the autism spectrum. Pablo and his animated friends are all voiced by people with autism, who also worked on story ideas and co-wrote scripts. Creatively, the team found that they discovered stories from new perspectives which resulted in really original and funny stories which young children will be able to relate to.

I wanted to embed a video but there's just no way to do that, unfortunately. I do recommend you check out the BBC's Pablo show page and you can watch a short video about Jake, the young star who voices Pablo.

It's so wonderful to see television featuring diverse voices, and as an autism parent, this one is especially wonderful to me. Wish we could see it over here in the USA! Best wishes to the cast and crew of Pablo!
By Ellie DeLano - September 25, 2017