Happy "Talk Like A Pirate" Day! Meet My 5 Favorite Pirates! 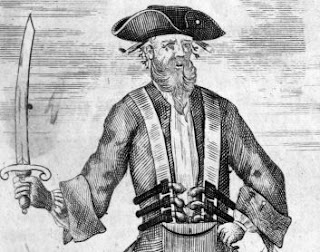 Ah, pirates. We all know they were probably murderous raping scum with poor dental hygiene and questionable bathing habits, but we push all that aside for a romantic picture of the open sea and the wind taking the sails. Pirates are dashing! Daring! And they make any movie better, they really do. So here are my five favorites - and some of my favorite scenes in which they feature.

Elizabeth Swan from Pirates of the Caribbean

Keira Knightly is breathtakingly beautiful, but stick a cutlass in her hand and she's magnificent. And so damn smart!

Captain Jack Sparrow from Pirates of the Caribbean.

The Dread Pirate Roberts from The Princess Bride

Cary Elwes has had a long and distinguished acting career, but he will forever be Westley to me.

Killian Jones, a.k.a. "Captain Hook" on Once Upon A Time - I know, I know. . . no big surprise if you know me. Colin O'Donoghue is just outrageously gorgeous and this character is so witty and snarky and charming and is elocution is crisp and Shakespearean and excuse me, I need to take a cool shower.

My number one pick from my all-time favorite movie: Robert DeNiro as Captain Shakespeare in Stardust! No one else could play a fierce, gay lightning pirate with such panaché!

That's it for my list - who are your favorite dashing sea captains?