Lessons To My Son: When A Girl Says Go Away, You Go 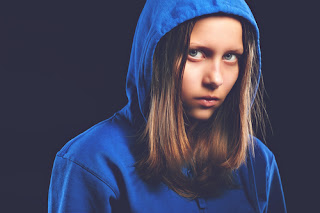 David is at a difficult age. Puberty is hitting him full-force, and like any thirteen year-old guy, he's noticing girls a whole lot more. David also missed the part of the autism manual where it tells you not to be social. He's a very, very social kid. He wants to say hi and he wants to chat, especially if you're a girl.

He's just not very good at it. He repeats movie dialogue on an endless loop. He asks the same questions over and over and over again because they're the ones he rehearsed in his head before engaging you and your answer might not match what he thought you were going to say, so he asks it again. In short, if you don't know David and his unusual way of speaking and interacting, he can be . . . odd. Even creepy. It hurts my mom heart to say it but I know that it's true, particularly at his age.

David the kid is now David the young man. The five foot two (and growing) one hundred and thirty pound young man. He can be seen as not just creepy, but a potential threat by anyone smaller than him. Which brings me to our beach vacation last week.


David was happily swimming in the ocean - it was later in the day, and not many people were still around. A girl who looked about his age was also swimming alone nearby, and David swam right over to her. After introducing himself, she said hi and made to move away. He followed her, of course - he wasn't done talking to his new friend.

She made some stilted small talk - I couldn't hear her words but her body language spoke volumes. She wanted to be left alone, and David, who is blind to social cues, couldn't see that. Finally, she used her words (kudos to the parents who raised her to be straightforward), and she was loud enough for me to hear.

His smile didn't falter. He stared at her a moment as if he were sure she was teasing him. And he didn't go away.

So I called him out of the water and over to me, much to the girl's relief.

We had a brief talk about how important it is to respect someone's wishes. I explained that the girl wanted to swim alone, and he should let her. I told him it was great that he was trying to be a friend, but once he said hello, he should notice whether he's the one asking all the questions. If he is, they probably don't feel like talking right now. Maybe she just wants some peace and quiet. Maybe her mom and dad will be mad at her for talking to a stranger. Whatever the reason is, right now, she doesn't want to talk and you should let her swim alone.

He got it, and shrugged it off, and went back to swimming a little further down the beach from her, and everything was fine. Later, when we were at dinner and it was just the two of us, I got a little deeper, to reinforce the lesson.

I told David that he's a young man now. He's going to get bigger. And girls have good reason to be afraid of a guy they don't know because sometimes guys can be mean, and say or do things that make girls feel like they're not safe. I told him that unless he knows someone really well from school or the neighborhood, he needs to assume that they're a little afraid of him at first. And he needs to pay attention to who's doing all the talking. Or if they're trying to move away, or they're not answering his questions with more than a word here and there. Is their body pointed away from him? Are they not looking him in the eyes? This is stuff he needs to look for and pay attention to.

Above all, he needs to respect whatever they say. If they say "No, I can't play with you", "I have to go", or "Go away" he should leave them alone, and not take it personally - they just don't know him. I also went over appropriate conversation just to be safe. Telling a girl she's pretty is a nice thing to say to a friend that you've known for awhile. But if you say it to a girl you just met, she's going to be a little afraid of what you mean by that.

It's confusing for him, I know. Especially since we've pushed and worked so hard to encourage him to socialize - he so desperately needs the practice, and he really does love to meet and talk to new people. Girls are confusing enough for a neuro-typical guy who can read body language and facial expressions. For someone like David, it's a complete, chaotic mystery attached to a girl he very much wants to be friends with, if she'll just give him a chance.

These lessons will be reinforced again and again, not just for the sake of proper socialization, but for his long-term safety. Someday I will be gone, and David could very well be an awkward, socially-blind, physically imposing forty year-old guy who tries to start a friendly chat with a girl and ends up with a policeman, or worse - an angry boyfriend, husband, or father - in his face. That thought terrifies me. So we begin reinforcing the lesson that every mother must teach a teenage son: When a girl says "go away," you go. You just do.

Even if it makes you (and your mom) sad, you just do.