I Need To Find A Cat Whisperer 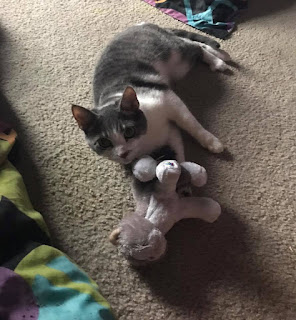 Guys, this is Annabelle. She's a sweetheart. She's adorable. And I don't know what to do with her.

Here's the sitch: You may recall that we adopted Annabelle a few months back. She's the sister of my other cat, Niko (from the same litter) and her previous owner had to rehome her after they got a couple of big, loud dogs that scared the bejeezus out of Annabelle. She spent most of her time hiding in their daughter's room, and crying when no one was in there with her, so they felt that rehoming her was the best thing to do, since the cat could not adjust to the dogs (we're talking a couple of years, here, that they tried).

So we took her in, and the first week or so was rocky. We kept her in a room away from the other two cats, and she hissed and tried to claw anyone who came within a couple of feet. Gradually, that gave way to letting us pet her for a second or two, and then letting us pet her every time we entered the room.

We let the cats into the room one at a time, supervised, to see how she'd interact, and that went badly. She hissed and growled the second she saw them. We did this daily for weeks, hoping to desensitize her, even let her out of the room to walk in their space while they were locked away, but all she wanted to do was hide under the bed in the next bedroom over. Finally, after a month we opened the doors and just kept an eye on the situation. GoGo ignored her. Niko kept coming in to try to play, he'd get down low and subservient, tilting his head playfully, and she'd try to take that head clean off his shoulders. This has been going on for months.


A few weeks ago, I guess he finally got tired and started fighting back. It got ugly a couple of times, and she started living under my daughter's bed and peeing on the carpet, so I moved her back into David's bedroom, haven't let either cat near her, and she's been happily living there again for a few weeks now. There's been no more peeing on the carpet, and she's not chewing the end of her tail anymore (that was another problem, but not a big one). She's a total cuddlebug when anyone's in the room, but only when the door is closed and she's feeling safe.

All in all, she's perfectly content to live her whole damn life in David's bedroom. She's never even seen downstairs, other than the day I carried her through the living room on the way upstairs.

I understand she's been traumatized. She's scared. She's been isolated for a long time before us and it makes her feel safe. But guys, I can't have a cat that lives in a bedroom her whole life. I just can't. It's not good for her, and it's breaking my heart. I'd hate to rehome her again - it'll be awfully hard. She'd have to be the only animal in the house, and she'd have to find someone who can handle a traumatized cat with extra TLC till she comes around to feeling safe with them. There aren't a lot of people with that kind of patience. And I don't want to give up on her. She's such a sweetie, really. She's just scared. Really, really scared.

Are there any cat whisperers out there? Anybody with any suggestions? I really want to keep her, and I really want her to feel like this is a home she can feel safe in.