I Am SO Jazzed To See Netflix's New Show, ATYPICAL!! 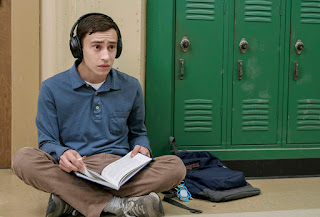 I've often lamented the portrayal of autism in movies and TV - they tend to focus heavily on people who are Aspberger's sort of autism, meaning they're very, very verbally acute and almost always in these portrayals they are hyper-smart and overly rude and sometimes even given superhuman autism powers. Ugh.

This show seems to get it. And while my son is not nearly as verbally fluid as the boy in this show, as the mother of a now teenage son with autism, this show is going to tackle what it's like to have a kid who wants - and deserves - to be like other kids, even though he's not in many very important ways. It's about the family that supports him and it's about his own struggles to fit in even when he's capable of realizing that fitting in can be ridiculous. It's about helping hands and letting go.


Anna was watching the trailer for the show with David, and he's super excited to see it, as well. This is his last year of middle school, after all. High school is just around the corner.

Excuse me, I need a minute.

Anyway, here's the blurb from Netflix:


This heartfelt comedy follows Sam, a teenager on the autism spectrum, who has decided he is ready for romance. In order to start dating -- and hopefully find love -- Sam will need to be more independent, which also sends his mother (Jennifer Jason Leigh) on her own life-changing path. She and the rest of Sam's family, including a scrappy sister and a father seeking a better understanding of his son, must adjust to change and explore what it means to be "normal." The series is created and written by Robia Rashid and Academy Award-winning producer Seth Gordon.

And here's the trailer. Atypical debuts this Friday and I'll be watching - I'll give you my review next week!