Horror Of Horrors - I Forgot My Phone! 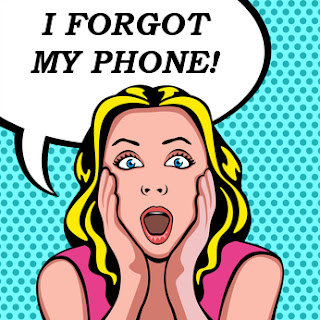 I realized it when I got too far from home to reasonably turn back, and fretted over it all the way to work. What if I break down? Will anyone even stop? Why would they - they'll all assume I have a phone.

What if my kids need to call me? What if one of them falls down the stairs or trips into the stove (even though I know they'll both sleep to noon like they have all summer long)? What if my boss (who has texted or called me on my cell exactly four times in the six years since they hired him) changes his mind about emailing, Skyping, or calling my desk phone?


Oh, the pure panic of it all. It's stupid, isn't it? Twenty years ago, I was a district manager for a jewelry company and driving between 3-4 states over hundreds of miles without a cellphone. I'd go to work every day without one. Even after I got a cellphone, for years I wouldn't turn it on unless I was in the car, and then I'd turn it off again as soon as I got home. I can't imagine doing that now.

It's crazy how we've all become so techno-dependent in just a few short years. Wish me luck as I drive home. I know I'm going to break down, or there'll be some extreme weather alert I won't get or I'll see a UFO land in front of me that I can't get a video of or something.  It'll be just my luck.

Do you think you're overly dependent on your phone?