Dear Daughter: You're Going To Be A Terrible Mother Someday 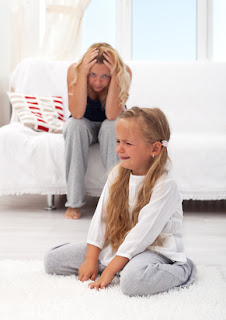 You told me yesterday, without the slightest hesitation, that you know beyond a shadow of a doubt that you will be an awesome mother someday.

You know this, because unlike me, you will be very well-versed on current popular music and have an Instagram following that numbers in the hundreds of thousands.

Or whatever replaces Instagram. I'm sure by the time you're grown and have children of your own, there will have been numerous social media giants taking over, rising and falling into oblivion. By then, Apple will have invented Wi-Fi shoelaces and iBras, but there will still be no real cure for cellulite.

I'm not sure that's progress, but I digress. Back to the topic of your someday motherhood. When you told me you'd be a great mother, I gave you an indulgent smile and a nod, and I went back to making dinner, but as I stood there stirring spaghetti, I realized the undeniable truth.

You are going to be a terrible mother.
I speak from experience.


They say that the apple doesn't fall far from the tree, and I can look at you and I know, I know that you are going to be a terrible mother, just like me.

You are going to plan for your baby to have a well-ordered feeding schedule and regulated sleep and nap times, and it'll all get blown to hell by colic, or teething, or a kid who's unfortunately inherited her mother's distinct night-owl tendencies. You'll try to work around it, with it, through it…but you'll fail sometimes and sometimes will feel like often.

You are going to be determined that your children will eat only healthy foods only to have it all blown to hell by a child who refuses any form of protein until her fifth birthday, and another child with extreme sensory issues. You'll be begging, threatening, bribing…all the things you swore that you, as a parent would never do. And you'll do them. Oh yes. You'll do them. And you'll look at other mothers feeding their kids organic vegetables with a smile and know deep down inside that you're not good enough to be doing this.

You will work enthusiastically to foster a love of learning in your children. You'll read to them and you'll put books in their hands and you'll exclaim over every great test score and gloat over every academic accomplishment, and you'll still be brought low by the kid who got an F in gym because she's too body-conscious to dress out, or the other kid who doesn't learn the same way as the kids around him. You'll be frustrated and angry and wondering what you did wrong and you'll try to right the damage you've done because you failed them.

You're going to scream at them sometimes. You're going to curse at them – hopefully out of earshot, but never say never. You're going to close the bathroom door and put your face in the hand towel and choke back the sobs when you should be out there, in control and being parental. And after moments like that, you're going to find yourself sneaking into their room on the overnight, looking down at their beautiful faces so soft in repose, and you're going to swear you'll do better. You'll swear it and you'll mean it, and you'll feel like you owe it to them, because you came up short yet again.

My darling girl, you will be a terrible, terrible mother. Just like the rest of us.

And just like the rest of us, you'll pick yourself up, pry the Lego out of the arch of your bare foot, push your sticky, yogurt-crusted hair out of your face, and keep on going. Because that's what mothers do.