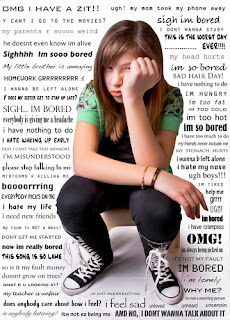 I am the mother of a teenage girl. Some days, I can't say that without gritting my teeth or having my lower lip tremble, and some days, I'm crowing it from the rooftops as pride swells my chest. It's a never-ending rollercoaster ride, this puberty thing, and it can take a lot of fortitude to communicate through the storm sometimes. Here are five important things I've learned about talking to my teenage daughter:

1. Perspective is everything – and she doesn't have it yet. It's very easy to sit here with decades of life behind me, and not see every little bump in the road as an insurmountable mountain. For my daughter, it's not so easy. Some of those bumps came out of nowhere and jostled her in ways she's never experienced before. They're startling and derailing and making her re-evaluate the road she's on constantly. And that's a good thing and a growing thing, but it's also a frustrating and occasionally frightening thing – for her, anyway. She may be "all about the drama" some days, and I do my best to try to help her put all that in perspective when it arises. Getting her to see the bigger picture isn't always easy (or welcomed) but it's necessary for her to develop her own sense of balance.


2. Her feelings are valid, even if you disagree with them. This goes hand in hand with developing perspective. Sure, the odds of her marrying her date for the eighth grade formal are slim, but when she tells you this person is her everything right now, believe her. When she talks about reconsidering her first career choice because her friends don't think it's cool, or that she hates a certain teacher who surely hates her back – you need to resist the urge to tell her that her feelings may not be based in fact. Feelings aren't right or wrong, they just are. What she's feeling is very, very real. The action she takes in the wake of those feelings is the important thing, here, and that's where facts and perspective need to be gently addressed. Whatever you do, don't tell her that what she's feeling isn't real or valid, because it is. To her, it really is.

3. It's okay to be angry, and to let her know that you are angry. I'd love to tell you that my daughter and I air all of our grievances in a constructive manner and like rational human beings, but that wouldn't be the truth. The truth is, no one knows how to push your buttons like family, and there have been times that she's pushed every one, then ran out of the anger elevator and left me steaming behind the doors. It's all right to let her know that she's pushed it too far. It's also all right to walk away for a little while, if you need to. I've had to say "We're getting nowhere with this right now. We'll talk about it again tomorrow." I've also had to tell her the subject was closed when she didn't want it to be – and stick to it. That part's a lot harder than it sounds, but it's essential to not let the anger derail you.

4. Admitting mistakes and saying "I'm sorry" goes both ways. I've always believed that as a parent, it's important to admit that you make mistakes. Sometimes, my temper gets the better of me and I lose control and yell more than I should. Sometimes, I'm well-meaning, but still handled something the wrong way. "I'm sorry" goes a long way (from both of you), and admitting that you should have done things differently or with more forethought (and you recognize that about yourself) is a good lesson for her to learn, as well.

5. She might refuse your help, but that doesn't mean she isn't listening. I've had times where I've felt like I was talking to a brick wall. She's got me convinced that I'm so hopelessly out of touch, or so uninformed about her life that any guidance I care to give is a complete waste of my breath. And then she surprises me by repeating my words (or sometimes just the gist of them) to a friend, or in a post or a tweet, or she demonstrates through her actions that some of that did sink in, after all. Your daughter is listening – even when she's rolling her eyes and acting like she wants you to shut up already.

Parenting a teen girl is not for the faint of heart. Some days, it feels more like a battle than journey. Just keep in mind that skirmishes make you both stronger, and that you're never too old – or young – to learn from each other. Keep the love front and center, address the actions, not the emotions, and just keep rolling, mom. You'll get there . . . together.
By Ellie DeLano - June 27, 2017