We Have A New Cat - And She Needs Some Extra Love 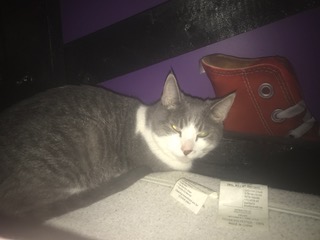 This is our new cat. She doesn't look very happy, and that's because she's not. Right now, I have her in David's room, where she promptly ran for the corner and that's mostly where she stayed.

She's had a rough time lately - her previous home was one where she was well-loved, but they got a couple of big dogs a while back and this little sweetie is terrified of them. She hasn't had a great quality of life since, so they had to re-home her.

I swore to myself that I'd never have more than two cats  - I really don't want to be some crazy cat lady, here - but you may notice, she looks a hell of a lot like Niko, our younger cat. That's because she's his sister. Annabelle came from the same litter, and when the kids and I saw that her owner was looking to re-home her, we took a vote and all agreed that she needed a family reunion.

So far, it's slow going. She's traumatized, and terrified, and who can blame her. She went from dogs in her face to an unknown and strange place, and it's going to take some time. Right now, she's in a room with food, water and litterbox, away from the other cats. I go in and visit for a few minutes several times a day. At first she hissed and growled, but now she'll let me get close enough to almost touch her. Almost.

I brought her brother in last night for a short visit, and she hissed a bit but quieted down to just eye him warily as he walked around in her space. He gave her a wide berth, but he was fascinated. I'd love to think they remember each other, but it's been four years since they were running around a barn together, so that's highly doubtful.

Anyway, everyone, meet Annabelle. She needs to learn to trust us, and she needs to learn that we're ready to love her to pieces. We'll take it slow, and let her set the boundaries for now. Wish us luck!
By Ellie DeLano - May 08, 2017