Today Is A Milestone Day - I Didn't Trim My Hedges 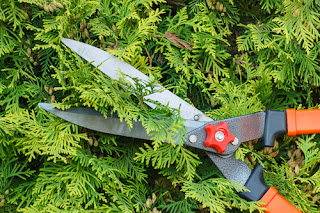 I was outside after work pulling weeds this evening, and eyeing my hedges out front, which badly need a trim. That thought led to a memory, and I started laughing.

You see, shortly after the ex moved out, I needed to trim the hedges. I'd never used the electric hedge clippers before, but really, how hard could it be? Unfortunately, before I could plug them in and get started, the ex texted me to argue about something. I don't even remember what, but it really pissed me off. I finished my conversation with him, grabbed those hedge clippers and tore through those bushes like I was giving him a haircut. A really angry haircut.


When I was done, they were razed down to nubs, and I stared in dismay at all the leaves and branches on the ground. My neighbor asked if I was okay and I told her I was fine, and I explained that using powered cutting devices after a fight with your ex probably wasn't a great idea. We had a good laugh, and the joke has been repeated with a lot of good humor at many backyard barbeques since.

So I considered breaking out the hedge clippers today, but then I thought I might save it for the weekend. I don't have any big plans. What was this weekend, anyway? The twentieth? Let's see, today's the sixteenth . . .

Today's the sixteenth. Of May.

And it would have been my twenty-fifth wedding anniversary today.

Wow. I didn't even remember. And an even bigger revelation is that I don't feel any kind of way about it. I mean - nothing. Not sad, not angry, not even a little wistful. I'm writing a blog about it, but honestly, there's not much to say.

So Happy Just-Another-Day to me. I didn't bother trimming the hedges just yet. I like to be reminded of how much we've both grown.
By Ellie DeLano - May 16, 2017