The Sensory Room - A Great Idea For Students On The Spectrum 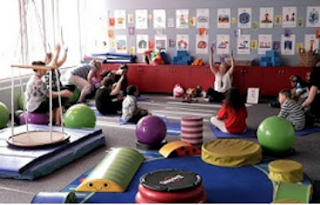 Years ago, when David first integrated in with his peers in kindergarten, they gave him a koosh ball to hold during story time. I thought that was odd at first, but the truth is, he needed it if he was going to have any hope at all of remaining quiet and listening to the lesson. His mind had to have that extra stimulation to act as "white noise" against all the other sensory stimulation he was being bombarded with.

He also spent time between lessons in the hallway riding a plasma scooter, or down in the learning support room bouncing on a mini trampoline. Sometimes in class, he'd sit on a large exercise ball instead of a chair - this not only helped him with his core muscles (an area the physical therapist works on with him) but it also provided just enough stimulation during class without being a major distraction to the other kids.

Now he's in middle school, and David's school has a full sensory room that he visits a couple of times a day. It has a hammock swing, various manipulatives, scented pens and pencils, a lava lamp, and a mini trampoline. Here's a look at what happens in a sensory room, courtesy of the folks at Edutopia.