Portraying The Spectrum: Meet Mickey Rowe, An Actor With Autism 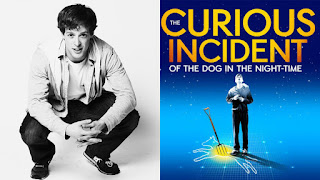 The Curious Incident of the Dog in the Night-Time is a mystery novel by British Author Mark Haddon, and it's told from the perspective of its protagonist, fifteen year-old Christopher John Francis Boone, a teenager with autism. It has since been adapted into a stage play to some acclaim, and now, for the first time in its run, the lead role is being played by a person on the autism spectrum.

Actor Mickey Rowe details his journey as both an actor and as the character of Christopher John Francis Boone in the May 14th edition of Playbill magazine, and oh, what an amazing read! Here, Mickey gives us his take on how his autism has enhanced his skills as an actor:

"I believe that in theatre, my “weakness” is one of my strengths . . . Autistics use scripts every day. We use scripting for daily situations that we can predict the outcome of, and stick to those scripts. My job as an autistic is to make you believe that I am coming up with words on the spot, that this is spontaneous, the first time the conversation has ever happened in my life; this is also my job onstage as an actor."

Mickey goes on to describe the hard truth about autism in the media:

"All too often when we learn about autism on TV, in the movies, or onstage we are learning about autism from others instead of going straight to the source and learning from autistic adults.But that is why it is even more important that young actors with disabilities see role models who will tell them that “If you are different, if you access the world differently, if you need special accommodations, then theatre needs you! The world needs you!”

You can read the entire interview here (and you should!)