Parenting A Teen In The Information Age 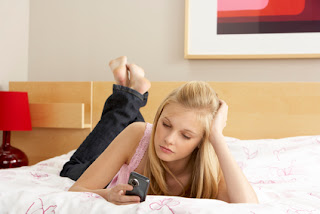 From the moment my daughter was born, I was ready. Ready to impart all the life-lessons I've learned, ready to be a steady shoulder with a valuable and entertaining anecdote or parable that will solve any of her life dilemmas. In me, she would find an ever-bubbling font of wisdom at the ready, and she would drink deeply, shouting my name to the world as the wisest mother of all mothers.

She's a teenager now, so most of the time when I start to share, I get an eyeroll. Or a "Mom. Stop." Or I'll finish my anecdote and say "You see, honey? That's what I'm getting at here…" and she'll look up from her phone with a puzzled expression and say "Huh? Were you talking to me?"

So I've learned to sling the advice not with a shovel or a garden trowel, but in drips and splashes, hoping something will splatter and stick.

"Look at this line," I'll say as she's getting ready for school. "Wish I'd moisturized more at your age." She reached for the lotion before she reached for her makeup.

In middle school, she had a boyfriend for three weeks once that she never really saw in school and they never once so much as held hands. The entire relationship was text messages. This, apparently, is common now. I wanted to tell her that a relationship where you're not ever in each other's company and have no plan to work toward that goal isn't the greatest foundation, but settled instead for, "How do you know you're the only one he's texting as a girlfriend?" I left that as a seed to germinate. It was the best I could do.

A friend gossiping about her doesn't become an anecdote about the time I trusted the wrong person. It becomes simply, "That sucks. What are you going to do about it?" I learned long ago that it's best to let her come to her own conclusions. I can always tell her why I think those conclusions are wise or not. I mean, when she's done watching that YouTube video, I can.

In this age of quick and short burst of information and instant gratification at a mouse click or a screen tap, the advice has to be condensed, refined, channeled into an easy-to-digest blurb in 140 characters or less.

"Just because all your friends are doing it, doesn't mean you should be, too" and the accompanying lecture about charting your own life has devolved to: "So you're just gonna fade into the mob?"
When two members of her clique are fighting and she's caught in the middle, I don't offer her life advice about dealing with her teenage hormones or learning to figure out who your true friends are. I just roll my eyes and say, "Like you need that drama." It's just a gentle reminder that she's the outsider, here. It's not her job to fix them. Or choose sides.

Yes, I use buzzwords like "fade" and "mob" and "boring" and "drama" – things no self-respecting teen would ever want to have associated with them. I am a one woman social media marketing bonanza where she is concerned.