Once Upon A Time – Season 6, Episode 20 Recap: The Song In Their Heart Sets A Fire In My Soul 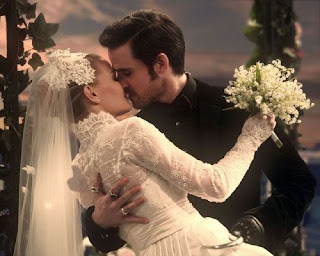 Holy Damn. Damn. I just . . . Damn. Forgive me, but the words aren't coming so good. Perhaps I should sing! I do have a Theatre degree with a minor in music, you know, so my inner Theatre nerd was squirming and bouncing even before the damn episode began.

Then they all started singing and I found myself clapping, oohing, aahhing, and squirming for entirely naughty reasons (at both Killian and Regina). Was this the dream episode, or what?

So . . . enough babbling. We begin tonight with young Emma, donning headphones and activating an old cassette recorder - then singing. And it's Emma's theme! One of her typical foster family assholes (honestly, did she meet one nice person in a foster home? Other than the Snow Queen?) tells her to shut up and stop singing because nobody loves her. Nice.

And a big shout-out to the intro pic, which features an orchestra warming up. What a nice touch!

Forward now to Emma's house, where she's perusing wedding dresses. Snow announces that Belle has found her original wedding dress in the back of Gold's shop, and asks Emma if she'd like to wear it. Of course, the answer is a tearful yes (especially if she saw the previews of that dowdy, pleated monstrosity they had her in) but alas, the Black Fairy appears and turns the feathered white dress into a feathered black dress. Maybe she's just looking to expand her wardrobe? She's been in that same damn dress since she got to Storybrooke, after all.

Flashback now to an anxious Snow White, wishing upon a star for them to have what they needed to help Emma, to give her a chance at happy ending. She heads to bed to get her expecting mama sleep, and wakes in the morning to a world full of song, courtesy of her wish.

I'm going to tell you now that this will be the easiest blog I've ever put up. I'm not going to do this any justice just telling you how much I loved these songs. I'm going to do the right thing, and put in the clips. This number is 100% pure Disney, and I. Loved. It. Josh Dallas just made my ovaries burst, I swear to God. So good.


Now we go back to Storybrooke, to the clocktower, where Emma and the gang stare in dismay at the huge cloud of dark fairy dust that the Black Fairy has swirling there. It's set to go off when the clock strikes six - the time Emma and Killian have chosen for their wedding.

There's enough dust there to curse the whole town, but Regina vows she's going to save this wedding - she feels like she owes it to Emma after taking away her parent's happiness.

I LOVE Regina's outfit - that bronze coat is fugging amazing! And her moves are ON. Damn. I am questioning my sexuality so hard right now. So hard.

Ahead in Storybrooke, Killian is staring in dismay at a bizarre white guido suit. Emma shows up to let him know the Black Fairy is still in the picture and he's not terribly surprised. He's ready to roll and take this darkened nonsense out once and for all, but Emma tells him this is one "she needs to win on her own."

Killian is wise to her instantly: she came to say goodbye and he knows it. He begs her to let him help, but with a sad I love you, she leaves. And she expects that he'll just stay put. Right.

And now we come to Hook's song. Fetch yourself a tall, cool glass of water before you watch. You'll need it to pour on your crotch. Unless, of course, all the saliva in your mouth drips out and takes care of that. Holy mother of Jason Momoa, is this man sex on legs, or what? Even more so when he sings!


Are you okay? Do you need a little time?

This man needs to do Broadway during his hiatus. He really, really does. I vote for HAIR. Because naked. Yes. Much naked.

Anyway, ahead now to Killian, showing up at Gold's to confront him for betraying Emma. He's seething beautifully, and then he pulls a blowgun and hits Rumple with a dart tainted with nightshade. This won't kill him, but it'll slow him down and keep him out of the coming battle. The Black Fairy shows up and isn't too pleased to see sonny boy lying in a heap.

Over at the sheriff's station, Emma's going through her memory box when Henry shows up to tell her she's doing the right thing. The final battle is exactly what she's supposed to do.

Henry finds her tape recorder and on it is young Emma singing her theme. She shrugs it off, and then she ventures out to find her nemesis.

Meanwhile, Regina and Zelena are in the vault. "You know her magic better than anyone," Zelena reminds Regina - helping Regina to remember that the curse stopped time. She hatches a plan to isolate that part of the spell and hopefully stop the curse from happening. Unfortunately, just as they get the job done, Rumple shows up (I guess mumsy revived him) and poofs the potion right out of their hands.

Flashback to Regina confronting Rumple in his cell about the singing curse. She wants Rumple to tell her how to stop Snow and Charming. He opens his mouth. does a little twirl and . . .

Oh, you teasing writers! Rumple doesn't sing. "I'd rather gouge my eyes out with a rusty fork," he tells Regina, and then he goads that her sister was better at magic before shooing Regina off to go fix it herself.

Segue over to Zelena in Oz, who's watching Regina get thwarted via her magic mirror and she's thrilled to hear Rumple's shouting her out. She breaks into song (of course). Go Bex Mader! "Wicked Always Wins" is about as Broadway as you can get, and she sells it with gusto - and one helluva green rack.


Ahead in Storybrooke, Emma confronts The Black Fairy at the mayor's office. She's ready to battle now but the Black Fairy poofs everyone there and holds them immobile. Then she poofs up her black crystal ball and tells Emma how much she loved young Emma's song of misery.

"You can't do this alone" she cautions her. With one agonized glance at her loved ones, Emma leaves and heads back to the sheriff's station.

Flashback to the evil Queen ready to lob a fireball at the Charmings, but they start singing and her fireballs fizzle. Now Regina's singing. It's a sing off! Oh, Lawd-a-Mercy, it's a sing off!


The Evil Queen finally breaks the singing spell with the counterspell held in the box from Zelena (which suddenly appeared in her vault). She not only takes their songs, but everyone's in Storybrooke and trapped them in the box. She poofs the Charmings back to their castle to await her evil curse.

Snow and Charming feel defeated, but Blue shows up to remind them that no one can take the song inside them - but those songs weren't meant for Regina. They were meant for Emma, who will hold everyone's songs in her heart as she fights the final battle someday. In addition, no one will remember ever singing in the first place to keep the songs safe and the continuity of the show roughly intact.

Ahead to the sheriff's station, where Emma tells Henry (who for some reason, wasn't summoned to be with the immobile group of people she loves) that the cassette tape of her song reminds her of all the times when she felt alone. Henry reminds her she's not alone, as he's had to remind her for six seasons now. Sheesh.

In a really beautiful and heartfelt moment, she apologizes again for not keeping him. Henry is firm in his conviction that she can beat The Black Fairy, but Emma says she's going to give the fairy her heart, sacrifice herself, and leave Henry with the rest of his family.

After Emma leaves, Henry puts on his rage face, exasperated at the way this story is ending. Suddenly, a wild page appears! It's the picture of Snow, getting Blue's gift of song for Emma.

Emma shows up at the mayor's office again, and bids each of her frozen family (and Killian) goodbye. The Black Fairy takes her heart, but she can't crush it. She drops it instead, and a white light flashes out of it. Emma hears the strains of her song as Henry rushes in with the page, explaining that her heart holds everyone's song.

Emma begins to sing the song within her heart, and it goes something like this:

Jen Morrison, that was spectacular. Holy hell, woman, can you ever sing! That glory note!! Chills!!!!

And now an immediate - and I do mean immediate - forward to the wedding, and they're on the rooftop of Granny's and Emma shows up in that ugly-ass dress with the June Cleaver pleats, with both parents walking her down the aisle. But I'll forgive the dress, and I'll forgive the crappy two part marriage proposal, because these vows are everything I never knew my Captain Swan shipper heart needed:

With Archie officiating, they are married. Killian dips her down, gushing about their happy ever-after, but that's just Emma's cue to start the finale song, A Happy Beginning.

This was as Disney as a finale can be, and the dwarves cutting a conga line, the infectious joy of everyone singing, the bubbling happiness despite being on the moldy rooftop of a mediocre diner, just filled my heart to overflowing and left me with a goofy-ass grin on my face.
That is, until the clock strikes six and the curse is released, taking them all away to who knows where.

Forget stars. Or Hooks. Or Daggers. Or Hearts (black or red). I'm giving this one one symbol, and one symbol only.

Those of you who are musically inclined will recognize that as a REPEAT, used when you need to repeat a phrase, or a verse, or an entire damn episode forever and ever and ever.

Massive kudos to the writers, and the composers, for making this whole thing feel absolutely organic and entirely a part of the story arc. This episode single-handedly redeemed a whole lot of crap, but it wasn't without its minor questions:
Okay, my darlings, what did you think? I know I'm a total music theatre nerd, but damn. Just . . . damn. Did you feel the same?

P.S. You can purchase the soundtrack of songs from this episode on iTunes!
By Ellie DeLano - May 08, 2017