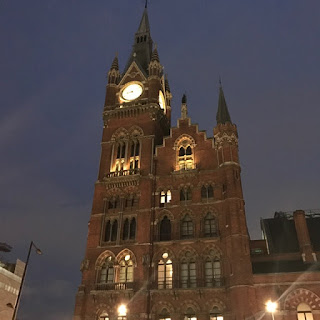 That, my dears, is a nighttime pic of St. Pancras station from the outside. It sits across the street from King's Cross, they both have trains, and I'm not entirely sure why they're not just all one station since they're joined together underground. From what Wikipedia tells me, King's Cross has the rail lines for all the UK, and St. Pancras is the hub for the Eurostar trains that go to the rest of Europe. Together, they both have the Underground. Anyway, St. Pancras is just gorgeous inside and out.

Inside, there's a lot of shopping (at King's Cross, as well), and a couple of different pianos set out for people to play at their whim. Most of the time when we were walking through, someone was playing, and beautifully. It was really wonderful. One of the pianos was donated (and signed) by Sir Elton John. 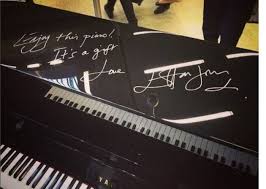 St. Pancras also has artwork throughout the station, and probably the most striking piece was this giant statue by sculptor Paul Day: 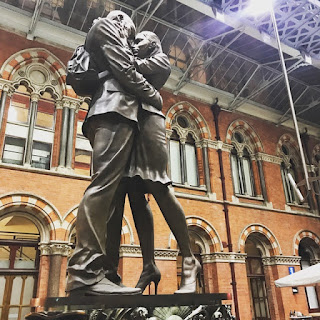 To give you some scale, notice that the top of the nearby doors barely meet the heel of the girl's shoe. The statue is titled "The Meeting" but is more commonly known as The Lovers Statue by the locals. There's a lot of detailing at the base, as well: 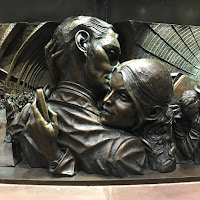 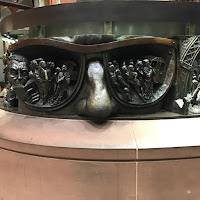 Across the street, King's Cross is no less impressive:

King's Cross, like most of London, has a rich history. The station opened in 1852, but the site was previously a village known as Battle Bridge, an ancient crossing of the River Fleet. Battle Bridge was the site of the final battle between the Romans and the Celtic British Iceni tribe led by Boudica (one of history's greatest badasses). Her ghost is rumored to haunt the station.

It was a real pleasure getting to roam the halls of both stations each day, and they really added to the trip in an unexpected way. Tomorrow - more odds and ends!
By Ellie DeLano - May 02, 2017