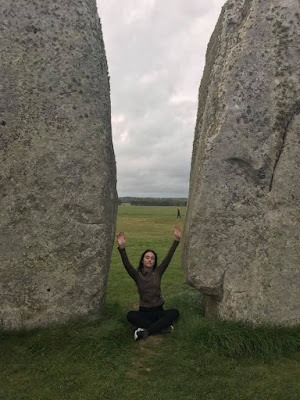 Our one big extravagance on this trip was the tour I booked for our final full day (which really wasn't our final full day, thanks to a flight reschedule - but that's another story). On Easter Sunday, we got up bright and early (for Anna, anyway) and boarded a bus for a cruise through the English countryside. Even through the tinted bus window, the landscape looked like a big, lush quilt of green. 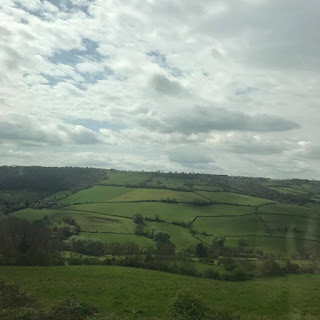 Our first stop was the popular tourist town of Bath, for a visit to the Aquae Sulis Roman bath - a UNESCO world heritage site that dates back to A.D. 60! It was crowded, but our tour group got their own entrance and our guides had us routed into the building with very little wait time. Once we got inside, we saw a mix of antiquity and the modern, as 3D screens projected scenes of everyday Roman life at the baths amid all the statues and relics the archaeologists have found on the site.

Anna found it particularly riveting - this is her heritage, after all (her father is of Italian descent), and I was amazed at how well-preserved most of this site is, despite being over 2,000 years old. Here are a few choice pics. 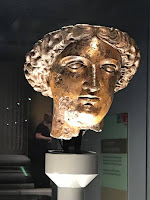 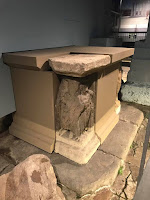 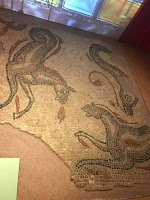 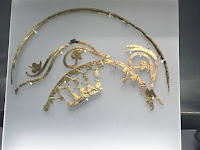 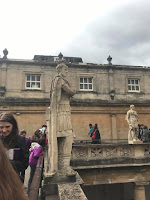 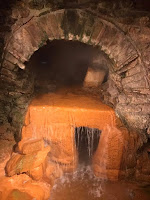 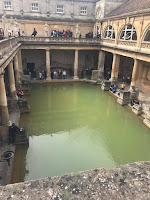 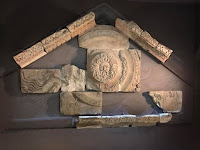 Left to right: The statue of Minerva, a corner of an altar (rebuild around it) featuring Hercules, a tile mosaic, the remnants of golden headpiece, a roman centurion statue, the source of the hot spring,
the main bath (this had a roof over it at one time that collapsed several centuries ago), and the temple capstone. (You can click on all of these to enlarge)

We had a little time to wander the streets of Bath, but not much - so beyond the Roman bath we really didn't get around. I'd love to go back someday, as the rest of the city is just as steeped in history. Bath was the presumed site of the Battle of Badon, in which King Arthur is said to have defeated the Anglo Saxons.

Our next stop was the medieval village of Lacock, so old it was mentioned in The Domesday Book, published in 1086. The village is entirely owned by the National Trust, and has been used as a film set for many motion pictures due to it's unspoiled appearance. Do these look familiar?

They're both parts of Lacock Abbey (we didn't get to go in, as it was Easter Sunday), but you may better know them as a hallway and a courtyard at Hogwarts. Pride and Prejudice and Downton Abbey have filmed in Lacock, as well. Here's the tour guide pointing out the house that Horace Slughorn was hiding in, disguised as an armchair in Harry Potter and the Half-Blood Prince: 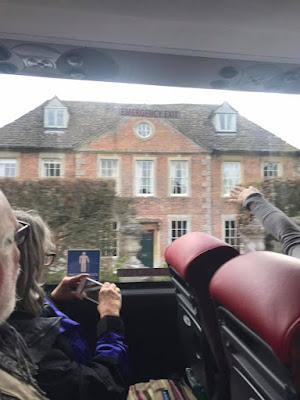 This was also our dinner stop, but Anna and I were facing a serious money deficit by that point. We opted out of the sit-down meal (it wasn't included in the price) and instead grabbed sandwiches when we were in Bath (from Pret, of course!). It turned out to be a great decision!

We were the only ones who didn't go to that dinner (which was pricey and full of stuff we had no real urge to dine on), but we only had a little over an hour in Lacock. Most of the others were just emerging from the pub when the bus rolled up, so they missed walking the cobbled streets and feeling like they'd slipped back in time. The tiny church was open, and the stream that ran through the village was tranquil and so very beautiful. 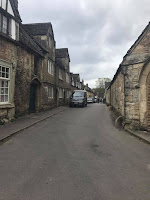 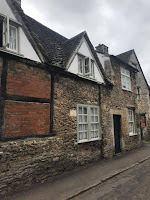 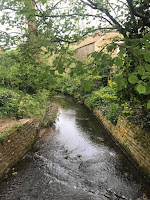 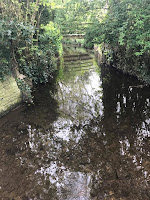 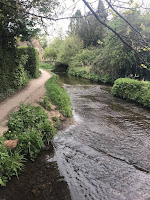 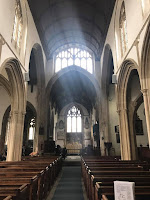 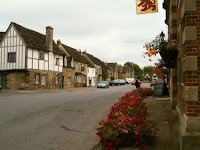 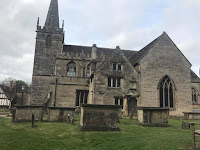 We reluctantly boarded the bus, and headed off under the late afternoon sun for the one-hour trip to Stonehenge, which flew by in a whirl of gorgeous countryside for me and free bus wi-fi and Instagram photos for Anna. Soon enough, we were pulling up to the visitor's center and killing time in the gift shop as the last of the day tours left the site.

This is where the extra money I put out paid off. A normal tour to Stonehenge will put you on the perimeter path, which is much further away from the stones than it looks in pictures. You cannot leave the path, and you'll be sharing the path with several dozen busloads of other tourists. If you shell out for the private tour, like I did, you go with no more than 52, and you arrive before or after the site's normal visiting hours - you're the only ones there besides the guards. We divided up into two groups of 26, and while one group walked the perimeter path, the other group got to walk among the stones, and sit among the stones, and breathe among the stones - but you can't touch the stones, of course.

I don't have words to describe to you how magical this was. How ageless this place feels, and how the weight of those passing centuries - we're talking four thousand years of people and rituals that we know about - pulls you in and leaves you spellbound. We took amazing pictures, and have a memory we will both keep for a lifetime. They may just be some old rocks, but damn if you don't feel changed after you've walked among them up close. 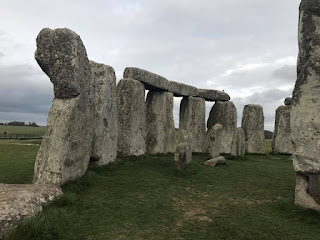 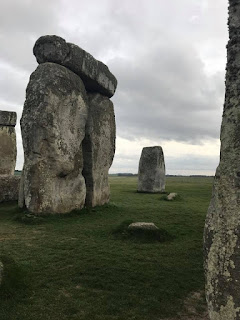 If you're ever in London and want to book an amazing and memorable day trip, this is the one for you. It was pricey, but worth Every. Single. Penny. You can book that tour online here, if you're interested.

We returned to the hotel good and tired, but feeling like we got our England's worth and then some. What a fantastic day.

Tomorrow: Odds and Ends in Londontown