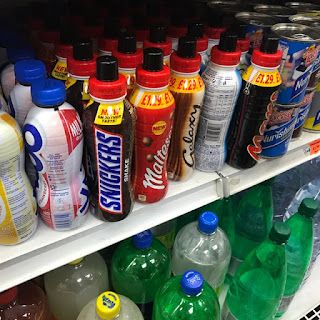 That's right: Snickers Milk! And Mars Milk! And Maltesers Milk (Maltesers are like Whoppers - malted milk balls). You can buy this stuff and drink it!

I opted to spend my money on cider instead. Maybe next time.

There were a few not so usual (for us) things on the trip - like the double flush button toilets, but I know all about them from my time in Ireland so they weren't a surprise. The biggest surprise we had in London was this: 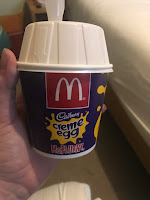 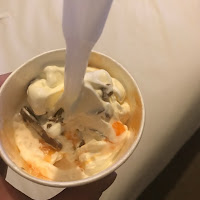 That is a Cadbury Creme Egg McFlurry from McDonald's, and it is surely what the angels eat while lounging indolently on clouds. Holy cow, was it good. Soooooo good. I ordered it with a large Diet Coke (I know, I know, but it's what I'm used to drinking) and did a double-take when they gave me a 500ml Diet Coke, which is a little under 17 ounces. That's slightly larger than a small (16oz) here and nearly half the size of the large (32oz) I'd normally get. Cost as much, too. In fact, it was a little more, without even figuring in the exchange rate. Yeesh.

Our next biggest surprise (and we both agreed on this early on) was the complete indifference to personal space by just about everyone in London. When they're walking, they don't care if they're three abreast in a narrow hallway and causing a bottleneck, they stand in doorways, they walk right toward you and bump you and don't give a crap about saying excuse me as they walk over the top of you or want to get around you. Seriously. But they all stand right and walk left on the escalators (as did we) so at least there's that. Other than that, good luck to you in London. I feel like I got a new bruise daily from someone bumping into me or making me walk into someone or something else as I tried to navigate around them.

And while that seemed slightly rude, Londoners surprised me in another way: specifically how children are handled in public. We dined in pubs and middle-range restaurants, and anytime a kid was there making the occasional loud noise or misbehaving (as kids sometimes do) everyone around them was either tuning it right out or smiling affectionately at the kid. Like, they all understood that sometimes kids make noise. I always felt (when the kids were younger) that the second either of my kids let out a peep, I was getting the stink-eye from everyone around me. People in London seem to be a lot more understanding and a lot less judgemental in that area.

And now for some cool things - this guy (no, he's not a statue - that's paint and makeup) was a performance artist in Bath. He held that pose for nearly an hour! 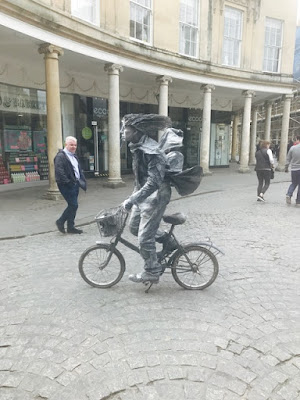 And how about this coloring book I found at The British Museum? 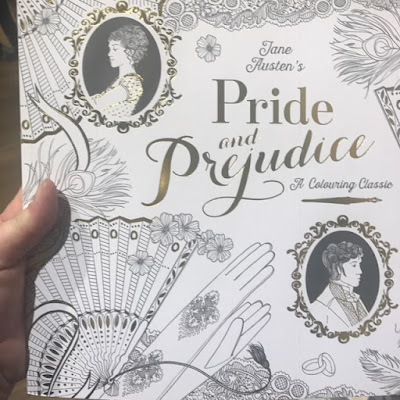 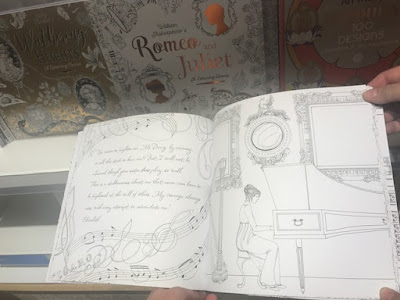 All in all, the trip had it's ups and downs, we spent a lot more money than I'd planned, and we walked more than we've walked in a year, but we had a good time. I definitely want to go back and see more - a few days hardly did the city justice. So long London, until next time!