Saturday, I March For Science - And Here's Why 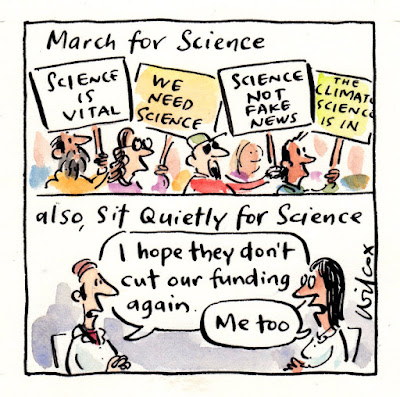 I had planned to start my London Diary today, but I'm holding off to next week because I think this is too important. On Saturday, I join thousands of others all around the world who will be marching for science.

Those of you who follow me know I'm a theatre girl. And a writer. I'm as far from a scientist/engineer/mathematician as you can get. I was raised by a fundamentalist evangelical mother and an engine mechanic father in a small town in the southwest, surrounded by a lot of camouflage wearing, gun-toting people.

And while I am a meat-eating, kale-despising girl who really has no use for homemade granola or Birkenstock sandals, I can see that we're on a planet in crisis, one that's at a turning point. Legislation has paved the way to reversing the damage we did to the ozone layer, many of our wild and free places have been sheltered, our water and soil has been tested and in some places, purified - but not at the levels we need to have any sort of legacy to pass on to our kids. The current administration has already peeled back many of those protections and is targeting more.

We need cleaner, renewable sources of energy. We need stem cell research and valuable gene therapies. We need buildings and vehicles designed for efficiency with an eye toward their environmental impact. We need explorers to step out into space and onto other planets. And in order to have all of that, we need scientists.

We need scientists who carefully study data and make comparisons and projections based on that carefully vetted data, not conjecture and mythology and corporate mouthpieces who wear politician's clothing. We need doctors and physicists and engineers and geologists and ecologists and researchers. We need them all, and we need them to have the funding in place to do all the things that will ensure our children have clean air and water, forests and streams and oceans teeming with life, vehicles to take them where they want to travel, and most of all, an endless love of curiosity and knowledge that drives them to ask why and dig to find multiple sources to support the data that's in front of them.

They say a little knowledge is a dangerous thing. A lot of knowledge, however, is a good thing. A very good thing. Not everyone needs to go to college, or be a rocket scientist. God knows, I'm as far from that lifestyle as a person can be. I don't need to understand science and math to know how very badly we need good people who do.

So on Saturday, I'll be joining people from The Audubon Society, The National Parks Conservation Association, NASA, The American Library Association, The American Medical Student Association, The Earth Vision Institute, The Union of Concerned Scientists, Girls in Tech, The National Society of Black Physicists, The Society for the Advancement of Chicanos and Native Americans in Science, The National Council for Geographic Education, Bill Nye, and thousands of others to learn, to teach, to discuss, and to speak with one voice and say Science matters. A lot.

We're not trying to save the planet. The planet was here long before us and will be here long after we're gone. But if we're going to save the people on it, it starts by making this world a place where we can sustainably live. That's not rocket science. That's just common sense.

Email ThisBlogThis!Share to TwitterShare to FacebookShare to Pinterest
Labels: Life, March For Science