Once Upon A Time – Season 6, Episode 18 Recap: Oh Baby, Gimme Some Pancakes 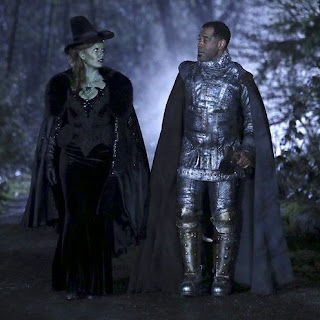 We open tonight on teen Zelena who comes upon a young woodcutter who's trying to rescue a fallen bird's nest. Zelena heals the broken egg with magic and replaces a nest in a tree. The woodcutter's name is Stanum, and he also saves Zelena when some bullies target her. He firmly proclaims that they are friends, since Zelena used her magic for good.

Forward now to Zelena's farmhouse in Storybrooke. The Black Fairy has got baby Robin in her arms, where she coos, "I never grow tired of that new baby smell." She wants Zelena to team up for the final battle, but Zelena's not afraid of her and is now full-on mama bear since the Blackened Bitch dared to touch her baby. She tells her royal Dark Hotness to piss into the wind.


Across town, Hook and Emma are "making pancakes" - which is now and forever a euphemism for every dirty thing I ever imagined these two doing to each other. And believe me, that list is vast. Or maybe it's just me and Hook sometimes, instead of Emma. Or a lot of the time. Anyway, they're just getting into it when Snow shows up and doesn't immediately realize she's impeding on their sexytime. See, back in her day, they called it "Making Tacos." Here - watch the scene. I know I want to again.

Snow has been planning this wedding for a while and she wants to make the most of this mother daughter bonding event. Personally, I'd rather see Snow bond by getting drunk again, but whatever.

Zelena assembles the group to let them know the Black Fairy is trying to recruit and is presently hiding in the mine tunnels. She tosses off some great snarky jabs (calling the Black Fairy a "noir colored nit") and gets into it with Regina over who's more powerful. Zelena refuses to be a team player, but she does ask the others to watch her baby so she can go after the Black Fairy, so at least she's got that going for her. Anybody seen baby Neal lately? Anybody?

Snow mentions the wedding planning and Regina chimes in with "You really want to pick out centerpieces on the eve of the final battle?"

Meanwhile, Rumple lets Belle know that the Black Fairy has Gideon's heart. He also lets us know that the Blue is older than dirt and has known the Black Fairy since before she was evil, so she may have the answer to defeating her. They have to break Blue out of her coma and get her magic back first, though, so Rumple heads for the sorcerer's mansion to do some research.

In strolls Zelena with baby Robin. She asks Belle to babysit so she can go after the Black Fairy, in complete defiance of Regina's order to stay out of it.

Across town, David finds the apartment door mysteriously ajar, so he grabs his gun to look properly badass as he slowly steps through the doorway. Surprise! It's only Henry (who apparently realizes a locked door means bupkus in a town full of people who can poof into smoke and go anywhere). He's been writing with his magic pen. Every time Henry tries to write the outcome of the final battle, the words disappear, so he's not able to influence the outcome. He's desperate to translate his earlier gibberish, but David advises him to step away and live his life. Then he gives Henry's notes a troubled glance - clearly he recognizes something in the symbols.

Flashback to Oz and a now-grown Zelena is sitting down to a lonely dinner at her palace when a man shows up to ask her for help. It turns out it's her old buddy Stanum. He chopped down the tree belonging to the Wicked Witch of the North, but she put a curse on him and he needs a new heart or he'll turn to tin. He tells her of the magical Crimson Heart, hidden in the woods, guarded by a monster. Zelena scoffs, deciding the quest - and Stanum - are not worth her time, but he calls her a coward and her pride is pricked. She agrees to go along and defeat the monster.

Forward again to Storybrooke, and Regina has discovered Zelena's plan and confronts her in the mines. Zelena's all "You blame me for Robin's death" and Regina's all "You're so full of yourself and such a pain in the ass." They throw a couple of punches, and suddenly, the walls tumble down. When the dust clears, they reveal a vein of fairy crystals and Regina pockets one just as the Black Fairy strolls in. She sends Gideon after Regina, then taunts Zelena just enough to raise her hackles and takes off down the tunnels with Zelena in hot pursuit.

The fairy is clearly leading her on a chase into a cavern full of fairy crystals. Zelena hits her with everything she's got but instead of destroying the Black Fairy, she appears to be energizing her. The Black Fairy diverts Zelena's energy bolt to the crystals, turning them dark, which was her plan all along. She cunningly used Zelena's own desperation to be the best as a weapon against her.

Zelena and Regina get poofed to the surface once the Black Fairy is done with them and Regina tears into Zelena. She hands her the now black crystal and tells Zelena to go back to Oz, where she won't make things worse anymore.

Flashback to the woods of Oz, and Zelena and Stanum are hunting the monster. He tells her she needs to get out more and she confesses she's working on the time travel spell to get her back to before her mother gave her up. "You're going to an awful lot of trouble to be with someone who doesn't want to be with you," he counsels. Before he can finish telling her what she really needs, he's attacked by a bad CGI lion. I'm guessing he was going to say she needed pancakes. 'Cause I haven't stopped thinking about pancakes. This is the face you make when you don't get your pancakes.

The lion evades Zelena's green bolt and pins her down, but Stanum throws an axe at him and distracts him long enough for Zelena to zap him good. The poor lion gives her a look of pure torment and he finally slinks off as she calls him a coward.

Zelena opens the box with the Crimson Heart, but it starts sucking her power away - and she quickly sets it down. She refuses to give up her magic, and she's sure Stanum is working with Dorothy to try to steal her power.

It turns out he was going to advise her that she needs friends. She mocks him for thinking she'd give up her magic just to have a friend and to prove her point, she takes the heart and leaves him there to rust.

We end the flashback with Zelena eating alone and staring at the Crimson Heart, obviously second-guessing herself.

And in Storybrooke present day, we're touring wedding venues. Snow gets a wild hair up her ass and decides Granny's would be perfect for Emma's wedding.

David is understandably less than thrilled, and even throws out the fact that it was the site of her first date with Dr. Whale, much to Snow's chagrin. Somehow, he gets away with calling Granny's a "scrapheap" without taking a lasagna pan to the back of the head from behind the counter, and they storm out. Emma and Killian are more than puzzled by all of this, so they move on.

Next, they look at the Town Hall, but David is insisting on returning to the Enchanted Forest via magic bean and getting married in the castle. Hasn't he heard how very, very rare magic beans are? No venue is good enough for his special princess and he's had enough.

Once Snow gets him outside, he confesses that he just doesn't want a repeat their own wedding, which also took place in the middle of a battle with an evil force - and it ruined the day. Emma and Killian have overheard and agree - postponing the wedding may be a good idea. They want to get married when it's right. Like after they have some pancakes. Can we just get back to the pancakes, already?

Over at the farmhouse, meanwhile, Zelena collects baby Robin, grabs the black crystal and starts a cyclone portal.

The gang meets up with Regina, who tells them the Black Fairy has darknuked the crystals and Zelena has been dealt with, but Zelena didn't go back to Oz after all. In an odd turn of events, she shows up and makes a genuine and heartfelt apology because she has no one and nothing in Oz and Regina is all she has left. She offers to destroy her own magic, which also happens to be tethered to the crystals since the Black Fairy used it to charge them.

As she activates the magical heart, she makes Regina promise to look after baby Robin if anything should happen to her. Emma and Regina promise to protect the kid with their lives even though kids have a habit of disappearing on this show.

Zelena grasps the Crimson Heart, sucking all the dark power out of the crystals - and herself, as well. She tells Regina that she feels weak. "But you've never looked stronger," Regina says with full conviction. Zelena lets Emma and Regina know that Blue is lying in state in the back of Gold's shop, so they head over, clutching the now clear fairy crystal.

Emma has now developed super strength apparently, because we all know only a dwarf pickaxe can cut a fairy crystal. But screw continuity, she crushes the crystal to dust and it's enough to get Blue's heart beating again but not enough to wake her this episode.

The Black Fairy is good and freaked watching all this through her dark crystal ball, wearing her dark, feathered outfit, having had her dark plan with the dark crystals thwarted.

She's terrified because Blue knows her darkest secret: The real reason she gave up baby Rumple.

I'm giving this one six stacks of pancakes out of five. 'Cause pancakes. Yeah, baby.