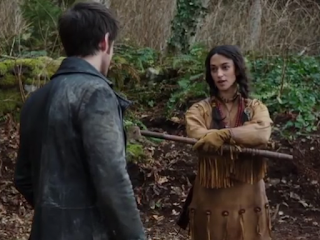 We open tonight's episode with Hook and Blackbeard fleeing the Lost Boys in Neverland. It seems they are determined to make him pay for unseating Pan. Suddenly, a tranquilizer dart takes down a Lost Boy and it's Tiger Lilly to the rescue! Except she's not rescuing at all - she defies proper Hook-concussing protocols and smacks Killian with a tranquilizing dart before she drags him off. Blackbeard is - well, he's just gone after that. Poof.

Meanwhile, in Storybrooke, it turns out Henry's glassy-eyed scribblings refer somehow to "The Final Battle" - which Rumple foretold back in season one. David thought that phrase referenced the curse (as did we) but apparently it was a breadcrumb trail the writer's seeded for when we get to this point. Or so they would have us believe.

Anyway, Emma is visibly shaken to hear this. "She can't go into the final battle without her family," David says in anguish, looking over at his sleeping wife. Regina lets him know that she has a potential way to break the curse but it's still in the experimental phase. Henry, meanwhile, is there to grunt and look concerned. Baby Neal is - well, he's wherever Baby Neal goes these days. They don't even mention him anymore, so I'm just not sure.

Flashback now to Storybrooke during the time of the dark curse. Snow - or I should say "Mary Margaret" - re-enacts her famous walk down main street and of course, runs into Regina. Shortly after, she sees a flower sprouting in the crack of the sidewalk and decides to take it to Mr. John Doe, the coma patient at the hospital that she's got a secret crush on. The flower drops magical glitter onto David's IV hand, sending his heart rate skyrocketing. His eyes open and he calls her Snow, waking from his coma and ready to battle the Evil Queen, with his memories fully intact.

Mary Margaret has no idea what's going on but take his hand when he offers it and the dark curse is broken for them both as they kiss and remember.

I know they're going to explain this, but come on! WTF, writers!

Forward now to Regina's vault where she and Zelena whip up a potion to leech out the curse by deep-frying Snow and Charming's hearts.

Unfortunately, the Evil Queen put in a failsafe to keep that from happening. Instead, the potion weakens them, and by sundown they will both be asleep . . . forever! Muah ha ha!

Flashback again to curse days again and Mayor Regina Mills is furiously looking for the missing "John Doe." Snow sends David to find Rumple so they can in turn find Emma, and they plan to rendezvous later at the farmhouse.

David makes his way to Gold's shop, and there's Rumple with his old hair!

Nice job on the wig - it really doesn't look half-bad. Mr. Gold has no idea what David is babbling about until David breaks Rumple's curse by uttering Emma's name.

Rumple lets him know that dust from that Pixie flower can reunite anyone joined by true love, and David plans to use the flower to find his daughter.

Forward to present day, where David has conveniently spied a pixie flower in Snow's latest video. It turns out Pixie Petals only grow in reaction to great evil, which tips them off that the Black Fairy is definitely in town. Or any one of two dozen "great evils" that have besieged Storybrooke in the last several years. Surely by now the whole damn town would be carpeted in glittering pink blossoms.

Speaking of the Black Fairy, Her Royal Hotness goes to visit Rumple, along with Gideon, and look! She's suddenly got Rumple's dark dagger! Jeezus, Rumple. Stop using the damn thing to slice cheese already. Sheesh! Mumsy wants Rumple to join up with her and Gideon and form the perfect family of darkness.

Across town, Emma is sharing some Dad time with David, who urges her not to give up hope on Killian - who is presently trussed up in front of a highly distrustful Tiger Lilly. She demands that he aid her in delivering a weapon to the savior another realm.

He tells her he fell in love with the savior which surprises the hell out of her, then she drops a surprise of her own: Tiger Lilly knows the Black Fairy is in Storybrooke. The weapon is part of the most powerful wand ever made (where have I heard that before?). Tiger Lilly used to be a fairy and was close to Ms. Hot Darkness back in the day. She failed to stop the Black Fairy from walking down the dark path, and regrets it sincerely. They agree to go to Pan's camp to try and find some leftover magic that will get Killian to Emma.

Flashback to the confusingly-altered curse days again. Regina's got a search party looking for John Doe in the woods, but grows suspicious. She sends Archie to the mines, then threatens to blow the whole thing up if Mary Margaret doesn't admit she's Snow White and awake. Archie is saved when the dwarf search party shows up (so great to see them all again!) and Snow gets away.

She finds David but before they can use the magical pixie flower to find Emma, Rumple shows up with bad news: They've only been cursed ten years, and in order to free the rest of the kingdom, they mustn't find Emma for another eighteen years. He suggests they all drink memory-removing potion and get back to where they belong. David balks but Rumple assures them it's the only way through.

Forward to the Storybrooke forest present-day, where a field of pixie flowers heralds the entrance of the Black Fairy.

"We've been destined to clash since the beginning of time," she assures Emma. Then, at her direction, Gideon vaporizes the field of pixie flowers. She makes an exit, assuring Emma that when the final battle comes, "everyone" will know it.

Snow is angsting over the loss of her curse cure, but Emma finds one untouched flower. "How did that survive?" Snow asks. "It did because it needed to," Emma says firmly.

Over in Neverland, Tiger Lilly starts a diversion and draws the Lost Boys away as Killian uses magical sap on his hook to set his shadow free. He tries to hitch a ride with it, but the Lost Boys yank him back, so he hands off the piece of wand to his shadow, entrusting it to get the weapon to Emma.

In yet another flashback, Snow and David toss the pixie flower glitter and a door appears, showing them ten year old Emma sitting in her bedroom.

David wants to go through to her, but Snow reminds him that everyone in Storybrooke is separated from someone they love. They have to go back under the curse until the whole town can be saved together. David reluctantly agrees. Snow does her ugly cry face, and they drink the potion.

Ahead to the present now, where Hook's shadow arrives at the loft apartment with it's sadly emotive and startling blue eyes.

It lovingly strokes Emma's face before handing over the piece of wand and dropping Killian's hook. Snow refuses to use the pixie petals, giving them to Emma instead so that she can reunite with Killian.

The Lost Boys, meanwhile, have sentenced Killian to death when the magical door appears and Emma rushes through, rescuing Killian and taking him back through the doorway as a gleeful Tiger Lilly looks on. The whole world is in jeopardy, but the moment he gets back, Killian just has to take a moment to propose properly.

Regina shoos Henry the placeholder out of the room and Killian does his best to mitigate the god-awful tainted proposal from earlier. It sort of works. Better, but not great.

The answer is still yes, of course, and Emma puts her ring back on.

Snow and David are now both good and sleep-cursed, but Regina still has a trick up her sleeve, and calls a town meeting to discuss it because "it's risky." I swear to God, if she says "it's risky" one more time tonight . . . like nobody on this fool show ever does a risky thing. Emma voluntarily became the Dark One, they all walk into hell, for chrissakes, and Regina's holding out on a possible cure because it's "risky?" Please.

For some horribly plot-convenient reason, Regina still has the leftover dregs of the original curse the Evil Queen used to curse Snow and David. If she can convince everyone to take a drink of the curse, it might dilute its power (Might?! Squawks Leroy. Aw, I missed him!). Hook, Emma and Henry pretend drink from an obviously empty goblet (were they out of water on set?) followed by the dwarves and the rest of the townfolk. Granny looks like she's drinking liquid Drano or something. The trick works, and the happy couple is awake.

Unfortunately, everyone else is snoozing, but it's just a catnap. David and Killian share a bro moment of father-murdering instant forgiveness that made me clench my teeth, especially after they had David frothing at the mouth with the need for revenge just a couple of episodes ago. Regina points out that everyone agreed to help because Snow and Charming gave up so much for all of them. Snow swears to Emma that she won't fight the final battle alone.

We end with a final confrontation between Rumple and his MILFy Mama. He knows that the Black Fairy has Gideon's heart, and it turns out Gideon disobeyed her by leaving one flower alive for Emma to find. Rumple swears to get Gideon's heart back. "If you come at me, there may be nothing left of this town when we finish," she warns, perfectly setting up the end of a season - or a show.

I'm giving this four pixie flowers out of five, and one of those stars is for the CGI that made a shadow sexy, with fathomless blue eyes.

My thoughts:
What did you think? Did all these plot conveniences and timeline rewrites have your head spinning?
By Ellie DeLano - April 16, 2017