Once Upon A Time – Season 6, Episode 16 Recap: One Book To Rule Them All 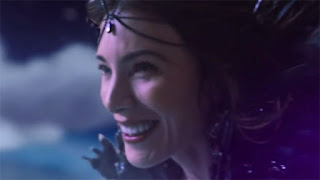 We open tonight on the Black Fairy, gleefully flying Gideon to her dark cavernous lair, where the children she's stolen mine her dark fairy dust in eternal, miserable servitude.

She find the copy of Her Handsome Hero that Belle tucked in with the baby and tosses it aside after ascertaining his name from the inscription.

A decade or so later, we see young Gideon reading Her Handsome Hero in his cell to an excited boy named Roderick who shares the neighboring cell. The Black Fairy shows up and finds the book he'd stolen back. Gideon tells her that he thinks his real mother gave the book to him so he'll remember to be a hero.


The Black Fairy laughs in his face and takes Roderick away for some dark, nefarious purpose as he wails like a stuck pig. Gideon realizes she left his door open, but he's too afraid to help his friend, choosing - in true family form - to cower in his bunk instead as she mocks him for his cowardice.

Ahead now to Emma's house, where Gideon reminds her that he's the only one who can bring Killian back. She goes on the offensive, force-choking and beating the crap out of him hard enough to pull the fake dollar store vampire blood from the corner of his mouth.

He lets her know that the Black Fairy can out-abuse her on the most abusive day of any abusive year and he's fighting for the children she's got captive. He refuses to give up on his quest to kill the dark-hearted bitch.

Emma grabs Snow and they head to Gold's shop to confront Rumple and Belle, also learning in the process that the Black Fairy is Rumple's mama.

Belle begs for Gideon's life, swearing that he'll be on the side of good if he gets the opportunity. Rumple warns them ominously that all of the darkness in the history of ever was born in the Black Fairy's soul. Whatever the hell that means.

Over now to Regina in her vault, where she's still trying to break the sleeping curse that's holding Snow and David captive. Henry grabs a pen to jot down an ingredient list for her and suddenly goes all milky-eyed and Gollum-like as he scribbles uncontrollably. That was seriously creepy. Good job, special effects team.

Flashback again to a now-grown Gideon who's being informed by the Black Fairy that it's his 28th birthday. She gushes about his obedience and evil powers, and it's clear her praise means a lot to him. He's even calling her mother now. She discovers that the key to her vault has been stolen, so she sends Gideon to the mines to find it and kill whoever is responsible for taking it.

He arrives in the mines, and begins berating the captive children over the missing key. He threatens to use dark fairy dust to turn the thief into a bug for squashing, but the thief turns out to be his childhood buddy Roderick, who isn't as dead as Gideon assumed him to be. He asks Gideon to find his inner hero - just like in the book - and help him defeat the Black Fairy.

Roderick lets Gideon know that the Black Fairy used the dark fairy dust to create a the original dark curse, and is sure to be cooking up something just as horrible again with the way she's stockpiling the stuff. Gideon confesses to Roderick his self-loathing and guilt over his previous act of cowardice, and I'm telling you guys, I ship these two. I totally do. Roderick says they need to find a savior and they can do so if they can find a crystal ball.

Forward to the Storybrooke clock tower where Gideon is reading Her Handsome Hero. Emma shows up and tells Gideon she recognizes that he has hope and she's all about that. She agrees to help him if he hands the sword over along with the spell to get Killian back. Gideon agrees.

Off they go to the Sorcerer's mansion, which, according to Gideon - who's never lived in this town - is the nexus of the most powerful magic in Storybrooke. What the hell happened to the Wishing Well? Is that not magical anymore? Anyhow, from the magical doorway in the sorcerer's house, they can create a portal. Gullible Emma does all the work as Gideon talks her through the spell but instead of the door opening to let Killian through, a giant, CGI arachnid bursts through the magic doorway and starts shooting gobs of web goo from it's badly-rendered anus.

The spider, it turns out, is a villainous creature from Her Handsome Hero. As they dodge the spider, Gideon tells Emma that he originally tried to kill her because he thought he could stab Emma with the sword and channel her powers into it.

And now, finally! We're with Killian in the Enchanted Forest, where he's tracked down Blackbeard once more and is bargaining once again for one of those incredibly elusive, yet very easily procured magic beans. He does an impressive one-handed cut on a deck of cards and offers to play Blackbeard for ownership of the Jolly Roger - again.

Killian loses the card game, but forces Blackbeard to give up the bean in order to get to the Jolly since it's in another realm. They jump into the portal together.

Over in Storybrooke, Henry apparently wrote some kind of gibberish before he passed out. He has no idea what it means when he comes around, so Regina heads for the loony hatch to visit Isaac, in case he has any insight.

Always nice to see Nurse Ratched and The Chief.

Isaac peruses Henry's notes and then tries to make a deal for the information Regina seeks. He wants his freedom, a sports car, relocation to New York, and (gasp) Hamilton Tickets! Okay, I'll admit, I laughed out loud at that one - nice call out - but really, now. This does not fit with the timeline at all. Hamilton would have been in it's fledgling days timeline-wise, and tickets weren't that insanely tough to get before it gathered some steam. I'll overlook that, though, because the line had it's desired effect.

Isaac also lets them know that Henry's author powers are "taking over." Whatever that means.

Meanwhile, the sorcerer's house is one big spider web and Gideon betrays Emma, sticking her to the web.

It turns out he created the spider, and he takes the sword, which will get all of her power once the spider takes her life force. He also swears Killian will never get back to this realm.

His words are found to be true, sadly. Killian and Blackbeard end up in Neverland, which is now overrun with unruly Lost Boys.

They take off running for the shoreline, and Blackbeard gives Killian this season's concussion (I've missed those!) so he can steal the lone boat. As he rows away, he reminds Killian that he owns the Jolly now.

Back at the Sorcerer's house, Emma pulls herself free of the web and shoots the spider with her magic. It wraps her up Frodo-style and begins draining her life force, sending it into the sword and leaving Emma unconscious.

Rumple strolls in just in time and saves Emma from being spider-food. He wakes Emma up, pulling her power back and out of the sword as Gideon is using it to open a portal. She and Rumple vanquish the spider together and she lets him know that (a) Gideon tried to kill her again, (b) he's hella evil and (c) he cannot be saved.

Flashback once again to the dark realm, where Gideon gives the dark crystal ball to Roderick to help him find the savior, but in strolls mumsy to gloat about how this was all a test, and Gideon failed.

He tosses a faceful of Black Fairy dust at her buy she dodges it and uses the dust on poor Roddy. He's verminated and then squashed under her point black shoe.

Gideon vows to find the savior who will destroy The Black Fairy with her light magic. She waves him off and casually takes his heart, reminding him that now that she holds his heart:

Oooh! Nice to see a callback that's a good plot device, as well. Poor Gideon can't help being eeevil, not as long as she's holding his heart. She lovingly informs him that once he kills the savior, the magical sword will free her from her prison.

Ahead in Storybrooke, a seriously pissed-off Emma and a fuming Snow tell Rumple to stop bailing his boy out - the dude has done his last evil deed and nobody's going to coddle him anymore. Rumple turns papa bear, threatening retaliation if they don't cut the boy some slack and the confrontation ends tensely, with Emma and Snow storming out.

Belle is concerned and appears to be leaning toward siding with Emma, but Rumple reminds her that this is their son, the Black Fairy isn't there, and they are. All is not lost.

Which leads us finally to Gideon, who is terrified to see that despite his failure, the portal opened just enough to let the Black Fairy in, and she's now in Storybrooke.

"There is much to do," she coos him in a deliciously dark way. You know, I really, really like her. She's delightfully evil and So. Damn. Hot. Why the hell would she let a mouse-faced whiner like Peter Pan have a taste of that?

And we end at the town line. Regina has the Family Truckster waiting for Isaac, who is pissed not to see a sports car and still wants his Hamilton tickets. He hands Henry a storybook with way too many blank pages at the end. Henry asks where the final chapters of the book are, and Isaac tells them that the savior fights the final battle in those pages. He advises them all to GTFO of town like he's doing, because he doesn't want to be around to see it. As he pulls away, we see a quaint little easter-egg in the form of his license plate: WED 1901 (Walter Elias Disney, born 1901).

Well. Lotsa stuff going on here, and more than a few Lord of The Rings references. I'm going to give this one four big spiders out of five.

This one had a whirlwind of stuff from four different realms, but oh, God, did I looooove seeing Killian being piratical again.

My thoughts:
And speaking of next week . . . I'll be late putting up the next recap, because I'll literally be dancing around Stonehenge this time next week. My daughter turned sixteen and I scrimped and saved and I'm taking her to London over her spring break. Just her and me and a whole lot of crisp, lovely accents. We get back late on Monday, so don't look for the recap before Tuesday a.m.

So tell me, my lovelies? What did you think of tonight's four-realm whirlwind tour?
By Ellie DeLano - April 10, 2017