Once Upon A Time – Season 6, Episode 15 Recap: Give Snow Another Beer, Please 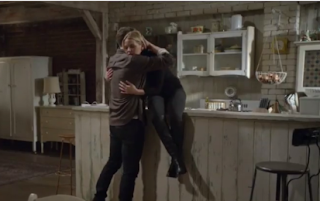 We begin tonight with a fuming David, who has apparently just learned that Hook killed his father. Emma (the tattletale) is bummed that Hook left, and Daddy David is there to hug her heartache away.

And now we splash into the Natilus as it's being sucked into a portal. Oh, look, there's Liam! You know, there's not much of a resemblance on these Jones brothers, but they do have the same prominent forehead veins. So there's that.

Killian demands that they turn the ship around but their portal-jumping device is damaged and they need Kraken's blood to recharge it. Killian is, of course, now determined to find a Kraken.

List of things that make a portal:
And of all those things, Rumplestiltskin couldn't get his hands on one?

Now we traipse off to the Enchanted Forest in present day. Jasmine is being trailed by a still-not-shirtless Aladdin as they search for Agrabah and for some reason Jasmine seems to think it's there. Aladdin is tired of searching and thinks they should leave and return to Storybrooke.

Suddenly, she finds a ring in her pocket. And not just any ring - as we see in flashback - this is the Crown Jewel of Agrabah, and originally, it was set to be the dowry that would attract a prince with an army into an advantageous marriage, or so Jasmine's father hoped. Unfortunately, Jafar came in and blew that all to hell by declaring he'd broken the savior and Jasmine had until sundown to marry him - or Agrabah would pay the price.

In the present day, Jasmine realizes that Agrabah is nowhere nearby and is determined to drop the genie lamp in the sea once she uses her wish to free Aladdin, when up pops a Kraken. 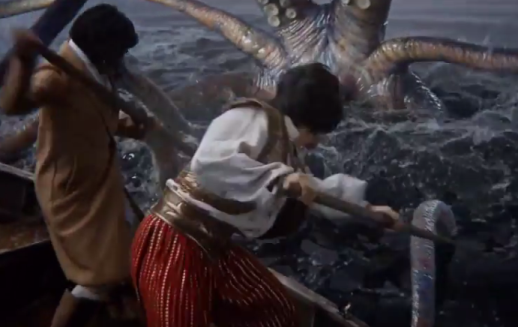 And suddenly, there's Hook with the Nautilus. He growls at them for chasing off his Kraken and snaps at them to come aboard. Oh, determined, seething Hook. How I adore you. 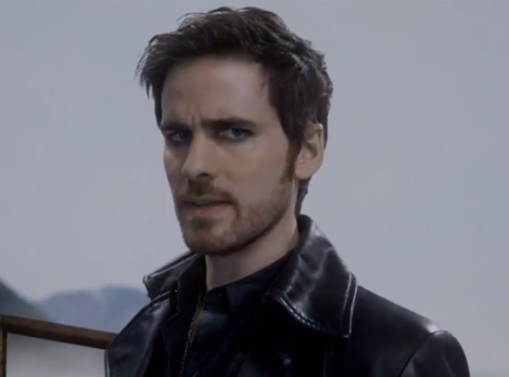 Onboard the Nautilus, Jasmine apologizes to Aladdin for not telling him the truth - that Jafar took Agrabah. Killian reasons that Jafar is a man with rage in his heart, so Nemo's raging-heart-finding device can find him, amongst all the other raging hearts in all the realms. And then when he finds this conniving, dark, raging-hearted villain, he's going to convince Jafar to help him get back to Emma.

Jasmine agrees, proclaiming that "Perhaps Agrabah has found its hero at last." I guess Aladdin is just chopped liver.

Back in Storybrooke, meantime, Emma and David are doing busy work at the station when Regina shows up to invite Emma to a brand new pub, "Aesop's Table," for a girl's night out to drown her sorrows. Emma is suitably unenthused. She heads back home to go through Hook's things and packs them away.

Like Killian Jones would ever leave his flask behind. Please. And what the hell - she's packing his stuff? He's been gone, what? A night? And Regina and Snow are ready to write him the hell off, too. For a guy who's redeemed himself, Killian sure needs to pick some better friends.

Henry is sitting on the couch with some earbuds in and half-heartedly hears Emma's request to take Hook's stuff to the shed as she rushes out to take a Sheriff's call. She arrives at Aesop's Table thinking there was a bar fight, but finds Regina and Snow have ambushed her into their girl's night out.

I'm digging Aesop's. We've got Vikings playing pool and a mancandy bartender - my kind of place. Emma balks at first, but Snow hands her a drink and proclaims, "I have a toddler and a sleeping curse at home. I need this." Oh hey, she remembers she has a toddler! Wonder who's babysitting, since Dad's mostly dead all night?

Over on the Nautilus, Jasmine offers Hook a shoulder. "I never thought I'd love anywhere but the sea," he says, realizing he misses Storybrooke. Jasmine admits that she thinks she doesn't deserve love or happiness since she failed her people, but Killian disagrees, telling her it's cowardly to hide behind your guilt. "I suppose I am a coward," Jasmine says sadly. "Maybe I always have been."

Flashback to her in the marketplace looking for Aladdin, but finding Ariel instead when a merchant rips Ariel's magical necklace off and reveals her tail. The necklace gives her legs and a voice - something she shouldn't have because the Evil Queen took it in a season 3 flashback to the day Eric left port and gave it back in present day Season 3 as well, which she wouldn't have needed to do if Ariel had a magic necklace. So the hell with that continuity.

Anyway, Ariel is looking for Eric, who was supposedly traveling to Agrabah. She and Jasmine climb aboard a flying carpet to check out the marketplace - and the CGI actually looks pretty good.

On the Nautilus in present time, Aladdin comes looking for Jasmine and interrupts a seething Killian who's searching for a Mysterious Island that has a reef and sorcerer. I'm not entirely sure why. Did they say? Aladdin is also fishing for intel on Jasmine's feelings and we all snort inelegantly as Killian lectures Aladdin about the importance of communication in a relationship.

We hear a bang and Nemo and Liam rush in to let us know that the Nautilus is taking on water and sinking and oh well, just get ready to die. Jasmine uses her wish to save the Nautilus and take it to the island. Once there, Killian bids adieu to Nemo and Liam, the latter making me laugh out loud with the line, "We never get much time, brother."

On the island, they find a hut full of all sorts of oddities, like corkscrews and the infamous red sand that Jafar once used to transform people. In strolls Ariel, welcoming them to Hangman's Island, her home.

Over in Storybrooke, Regina is trying to get Emma to open up about her pain. Emma is mostly numb, and Snow is obviously drunk and just killing me with it. It turns out the only Snow better than Bandit Snow is Drunken Bandit Snow. I can't possibly do this justice. Just watch.


Flashback again to Agrabah, and Ariel is too nervous to face Eric. Like Tink with Regina, Jasmine urges her to find her true love and just go for it. Ariel strides into the tent and tell Eric she's a mermaid, only to watch him transform into Jafar. He reminds Jasmine that she only has till sundown before she becomes his or dooms Agrabah.

Jasmine wishes she could find a hero to save her, and Ariel encourages Jasmine to save herself and Agrabah, but Jasmine just doesn't have the balls. Jafar poofs Ariel back to the sea, and Jasmine agrees to marry him. She offers Jafar the crown jewel ring of Agrabah and he laughs in her face because she played right into his hands. Agrabah is protected by ancient magic tied to the jewel but since she gave him the ring, now he can send Agrabah away, "beyond mankind's grasp."

Ahead now to Ariel's hut, where they find a Genie bottle and according to the raging-heart-o-meter, Jafar is in it. They agree to rub the bottle and wish Hook home and Agrabah restored before using the final wish to free Aladdin. Jafar appears, and having inexplicably broken the Genie spell, he knocks everyone out but Jasmine so he can gloat.

Jasmine demands to know where Agrabah is, Jafar tells her it's practically at her fingertips, as the city is trapped in the crown jewel ring. She finally sprouts a sack and refuses to give Jafar the ring and instead throws the red sand, turning him into a creepy walking stick that will no doubt be displayed alongside the puppets in Gold's shop. 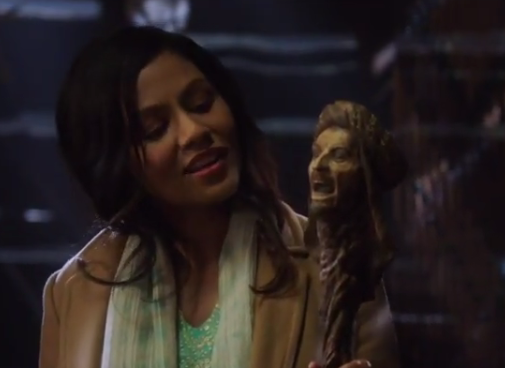 Over now to Emma at the bar, where her friendly mancandy bartender, Aesop, lends her a shoulder. It turns out he never could write his own story, and that's why he went to the land of Untold stories. He lost his wife and she's grieving Hook and they share a moment that pulls a few tears from Emma's eyes. As she dabs at them with a bar napkin, Emma realizes she needs to move on.

Over in the other realm, Jasmine tells Aladdin the city is in the crown jewel ring and he gazes into the stone, proclaiming, "I can see my hovel from here!"

It's not going to be tough to get the city out of that ring, though, nosiree. Jasmine just uses good old True Love's KissTM and all is restored and they lived happily ever after. Except Ariel totally makes off with the ring.

On their way out of town, Killian seethes some more over the need to get a message to Emma to warn her about Gideon, somehow forgetting that he's got a mermaid right in front of him that can swim between realms and they used her to deliver a message to Storybrooke just three seasons ago. But that's okay! It turns out she's got - oh, the mind boggles - a shellphone! 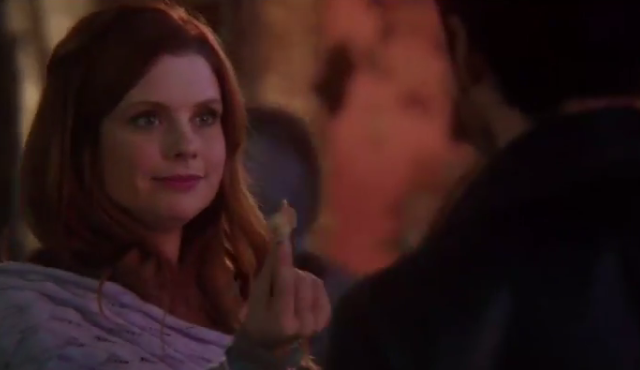 And by coincidence, Killian owns one of those himself! Of course, that other shellphone is in Killian's stuff, and Emma hears it as she's carting his stuff out to the shed.

He tells her he loves her, warns her of Gideon, and assures her that he'll never stop until he gets home to her. As Emma's sobbing into her own shellphone, up strides Aesop - who, of course, is not Aesop, but Gideon. He's got the "tears of the savior" from her cocktail napkin, and apparently that stops any sort of portal, keeping Killian from ever getting home to her.

Gideon has given up on killing Emma. Now he's willing to make a deal: he wants her help to kill the Black Fairy.

I was going to give this one four ridiculous shellphones out of five, but Jesus Damn! Did I love the HELL out of Drunken Bandit Snow. For that scene (and a whole lot of seething Killian), I'm going with five.

What did you think? Did the Aladdin/Jasmin/Jafar story arc live up to the hype?
By Ellie DeLano - April 03, 2017