My London Diary, Day One: High Tea On The Thames 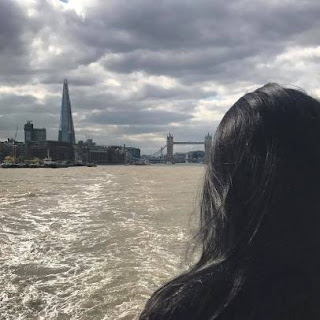 Our first day in London began with an hour and I forget how many minutes long queue for customs and passport control that I would like to never repeat again in my lifetime. We had filled out our landing cards on the plane, but that did nothing to expedite the process. This is the world we live in, I suppose. 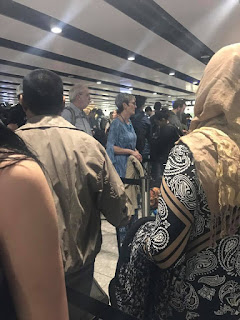 The cool thing about the endless queue (and yes, there was one) was that it was truly a melting pot unlike anything I'd ever seen in my melting pot of a country. I think every nation on earth was represented in that queue and the writer in me was fascinated watching them all speak and interact and gripe about the queue. I wanted to know all their stories. But mostly, I wanted out of that line.

We finally got through, and went to meet our shuttle service, which was set up by the travel agent to meet us after baggage claim. They weren't there. I called their office, read off my confirmation number, and was told that it was a valid confirmation but they had no record of me and I was out of luck. They didn't even offer to send another car or anything. So we hopped the tube (the Underground, for you London noobs) and got off at King's Cross Station, which was across the street from our hotel. Get a load of this! 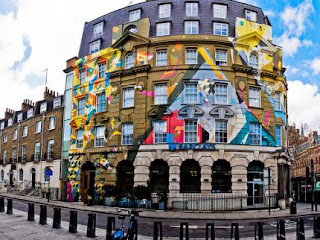 That is the hotel Megaro and it was perfectly located, with King's Cross and St. Pancras Station a stone's throw away and all of the regional rail and underground at your fingertips. The hotel was clean and reasonably quiet for it's proximity to a central hub, and the neighborhood was okay as long as you didn't stray too far from the station. It's easy to find, looking like an art project. The staff was really terrific, too -  they had a birthday cake waiting for Anna in our room! 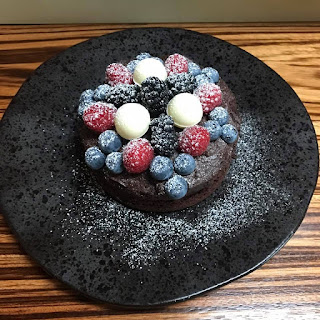 Once we'd gotten settled, we had some time to kill before our one reservation of the day, so we headed off to the Tower of London. This was not on the visit list (you're going to be boggled by how many touristy things we didn't choose to do) and it turned out to be a good call because it had a queue that was stretching into infinity and Anna had zero desire to see the crown jewels. So we took a pic from the outside which looks awesome with the overcast skies. 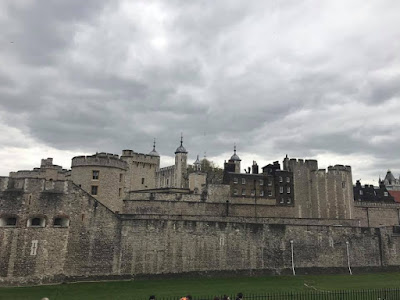 And I found a new chalice from whence to quaff in the Tower of London gift shop! 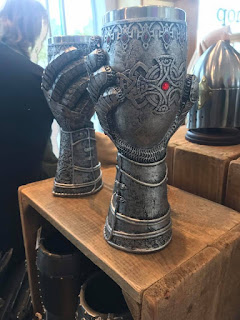 I also discovered a Pret A Manger, which are incredibly prolific in London and apparently they have stores in the US but nowhere near me - which is a shame. Great food, great coffee and tea, incredible baked goods, too. I'm not kidding when I say they're prolific in London. There were 3 in the train stations and three more within a three block radius of our hotel. We didn't go anywhere that didn't have one. Anyway, that's where I found this amazing sparkling water and I could easily chug a case of this at a sitting: 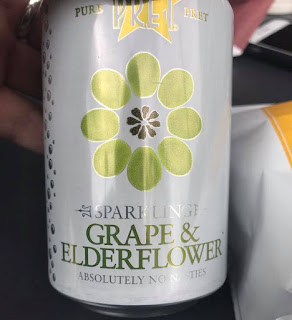 Sooo good. Makes me want to drive to Boston, Chicago, New York or DC to get one here in America. Sort of.

After strolling around the Tower for a while, we boarded our boat for our Tea on the Thames cruise. It was 90 minutes, we were packed in pretty closely, and the food was pretty to look at and serviceable but not spectacular. 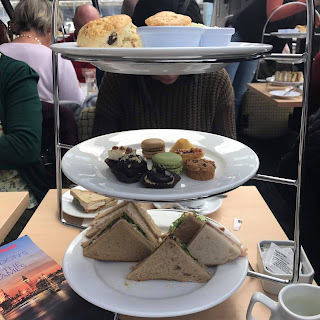 We had funky sandwiches (half of which were seafood and neither of us is a huge fan), petit fours and macaroons, and scones, which I love but Anna can't stand. The tea was good, and so was the service, so no complaints here.

After the tea, we went up on deck to see some of the sights. I didn't manage to get a picture of the London Eye or the Globe Theatre for some reason, but I did get some great shots of The Tower Bridge and The Shard (it's that cool pointy building). You can go up to the top of The Shard and have a spectacular view of London, and even have a magnificent tea there, as well. 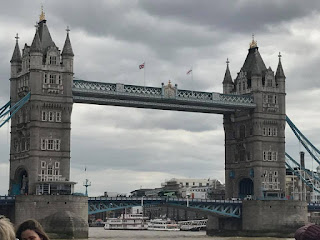 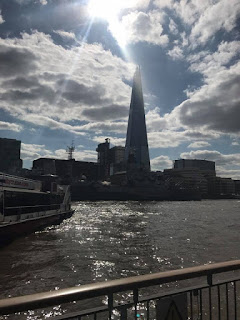 We also passed this quirky little waterfront restaurant that lets you dine in transparent igloos: 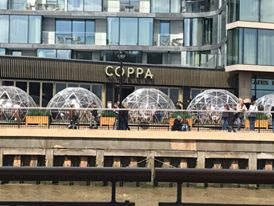 It looked like fun and we vowed we'd go there but we never made it. Bummer.

Anyway, after all that, we were tired. And we were tired because London is a lot of walking. A lot. No one tells you that because they've got this great underground system that can get you anywhere, but 80% of the walking you do is IN the tube! So many stairs!! SO many! And then an escalator, followed by three long hallways to get you to the next connecting train platform and then more stairs! Then you reverse it coming back - possibly after having to stand for the entirety of your journey on the train. Oy vey.

We got back and wandered around the area near the hotel, found a Tesco and few more Prets and then decided to call it a night, after dining on hot soup and rubbing our sore feet. All in all, a solid first day. We couldn't wait to visit the National Observatory and Space Center on Friday!

Stay tuned for Day 2 of our London experience!