My London Diary Day 3: Revenge Of The Jet Lag (And Mummies!) 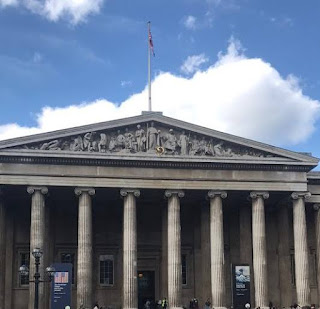 Day 3 of our London odyssey began with a very frustrated me trying to wake up a very jet-lagged teen. Anna couldn't fall asleep on Friday night, and was up till nearly four a.m. Consequently, she resisted every attempt to get up at nine, nine-thirty, and ten, and finally by 10:30, I gave up and went across the street to King's Cross to do some shopping without her.

Once at King's Cross, I found what I'd been looking for since the night before: The Platform 9 3/4 Harry Potter Shop! We'd wandered in on Friday night briefly (just before they closed) and the place was packed. I saw one of the store workers walking around with the world's most adorable plush Dobby on his shoulder, but alas, they were sold out and he wouldn't sell me that one. Check him out! 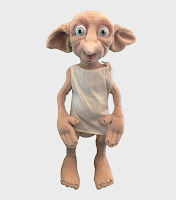 Isn't he adorable? And if you're a Fantastic Beasts fan, they just got in a plush Niffler, as well. They didn't have him while I was there, of course. Anyway, I could barely breathe in there on Friday night and Anna is the anti-Potter (mainly because her brother watches it almost daily and she's just so over all things Harry Potter - crazy, I know) so we weren't there long. Now I could shop at my leisure, fangirling over it all! Yeah!

Until I tried to go in. The kind girl in the Ravenclaw uniform let me know the queue was stretching the entirety of the hallway and turned the corner to go halfway around the other wall just to get in. I glanced longingly over at the wall leading to the Hogwarts train platform, hoping I could possibly get a picture taken, but you have to buy your picture inside the store, and the line to get the picture (which was substantial) would have come after the line to get into the store. From the looks of things, I would have made it through sometime around nightfall.

So I watched some other poor schmuck who must've camped out overnight for her spot get to have her picture taken pushing a trolley through Platform 9 & 3/4. I've blurred her face for privacy's sake, but more power to you, pink sneaker girl! 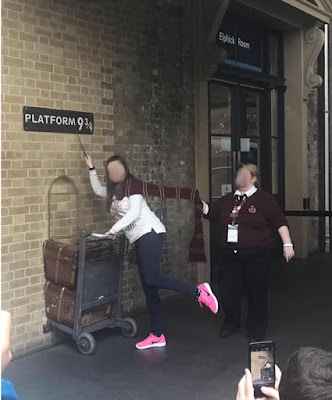 After that, I took a stroll through Fortnum & Mason, a lovely little tea shop with all kinds of goodies. Since it was the day before Easter, I flirted with the idea of buying Anna a chocolate Easter egg - her father usually gets really nice chocolate eggs for the kids for Easter - and Fortnum's had these lovely hand-poured and hand-painted eggs in decorative boxes: 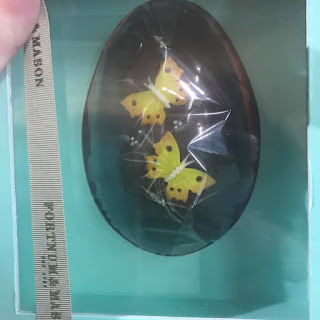 For forty pounds apiece. This egg was about 6 inches high and hollow, not stuffed with jewelry or even other chocolate, and it didn't come with a vibrating attachment. Forty pounds! For your convenience, I've done the conversion. That's $51.60 American dollars for a six inch hollow chocolate egg. It was lovely, but it wasn't that lovely. I reasoned that taking her to a neo-pagan prehistoric monument for Easter was going to have to suffice.

After that, I headed back to the hotel room and was finally successful in waking Anna. We had some lunch at Pret, and headed off to The British Museum - and it was outstanding!

There was a bit of a queue to get in (holy cow, have I used that word a lot in these blogs) but it moved quickly, and while half of England was there as well today, it didn't seem crazy-crowded like the observatory did. And there was SO much to see! The British Museum has several "big ticket" priceless items - and the biggest had to be this: The Rosetta Stone. 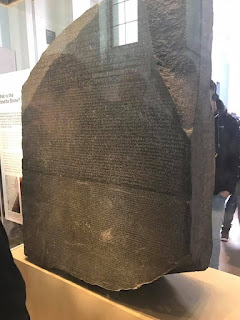 If you don't know what that is, you really should. So read up. They also have the death mask of Napoleon Bonaparte. 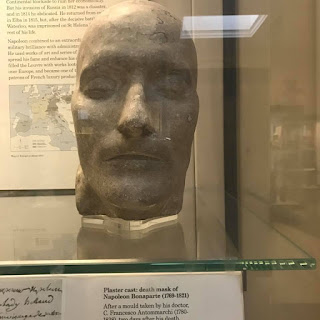 Creepy. There were also numerous rooms dedicated to priceless art from various cultures - I could fill several blogs with that, but I'll just highlight one piece because it was that amazing. This was enormous - a bowl made by artist Hosono Hitomi. It's porcelain and features 1,000 individually molded leaves. You can read more about it (and see far better pics) here. And finally, Egypt! The British Museum holds the largest collection of Egyptian antiquities outside of Egypt itself, and they were just fantastic to see. Here's a massive picture dump of my favorites, but this hardly does the collection justice. 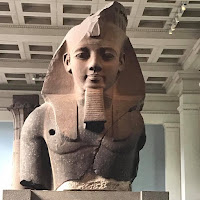 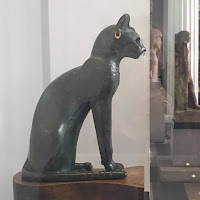 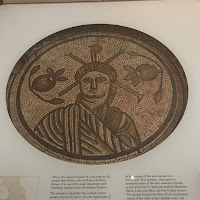 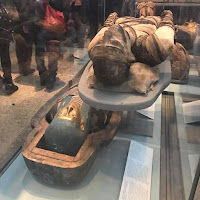 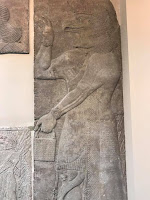 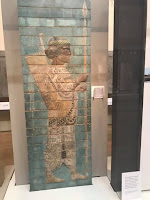 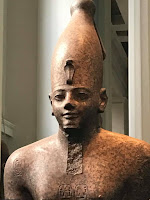 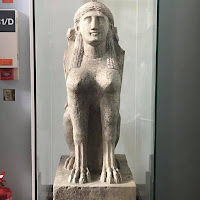 After our day at the museum, I decided to cash in the Groupon I'd searched out and paid for before we left. It was for a charming little Italian restaurant that offered a three-course meal with a glass of wine for two, all for twenty pounds. It took us two trains to get there, and when we got out of the train station, we were a bit surprised to see we were in the middle of the middle east. The area had all kinds of great kebab places and men were sitting in streetside cafes smoking hookah pipes, so I'm guessing this area wasn't known for its Italian food.

Still, we persisted, and walked a few blocks, turned down a really sketchy-looking alley, and finally found the place. Its door was locked and there was one guy inside who glared at us through the window but made no move to come to the door. We finally noped on out of there. Anna isn't a fan of kebabs (they smelled mouthwatering, but oh well) so we got back on the train. We decided we were really footsore and pretty tired and since we had a big day planned for Sunday, we made an early night of it and went back to the hotel for dinner since we had a coupon from the front desk.

What happened next will go down in family history as the "Pork and Apples" incident. The restaurant was fairly high-end, and far pricier (even with the coupon) than I would have liked, but Anna insisted she wanted to try the nose-to-tail pork with apples. They had a chicken breast that looked fairly basic for twenty-five pounds, so I ordered that.

Anna's pork came as a very small cutlet (like two bites) a pork croquet (another two bites) and a layered baked apple dessert thing that looked tasty, also about two bites worth. Anna stared at her plate in dismay, because she was seriously hungry. I reminded her that this was Europe, and portion sizes, particularly in nicer restaurants, were small. My chicken breast was easily half the size of what I'd get in America, and I got half of that because I gave Anna the other half. She didn't care for the croquet, and when she bit into the apple pastry, I saw her gag and reach for her water.

"Mom! Taste that!" she choked out. "It's pork!" I was sure she was being overly dramatic, pork with apples is no big deal and the Pennsylvania Dutch in our area cook it all the time. So I took a bite and oh, holy hell. This was not apple. At all. It was all pork. Pork fat, to be specific. Creamy, gelatinous chunks of pork fat, layered under a pastry cover. I had a mouthful of pork fat. I couldn't do it. I had to delicately spit it into a napkin because if I'd swallowed that, it would have come right back up. I carve every inch of fat or gristle of any piece of meat I eat - I can't even eat chicken skin! It's a texture thing for me, and this - this gave me a full-body shudder and we both lost our appetites.

Until about 10pm. Then we pulled our shoes back on and walked two blocks down to the McDonald's and got some nuggets and fries. I swore we wouldn't eat any American food while we were there, but we were starving, it was late, and it was close. It was also packed, so I'm guessing it's a popular spot.

Anyway, it hit the spot and with our tummies fed, we hit the sack so we'd be fresh for our all-day tour the following day. Next up - Roman Baths, Medieval Villages, and Stonehenge! Look for it all on Monday!