London Diary Day 2: The Royal Observatory Was A Royal Pain 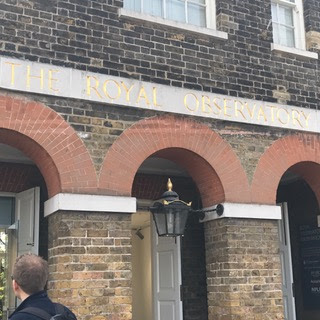 Day 2 in London began with such promise! We didn't get up quite as early as I'd like - Anna was having a serious issue with jet lag and she's never great with morning to begin with, but eventually we made our way to St. Pancras Station for a hearty breakfast at a great little Italian place called Barzetti. They were one of the few places you could get a real, sit-down breakfast (vs a pastry) and Anna wanted eggs. It turns out it was a terrific decision. I had the Uova al Forno Con Pancetta, which was Two eggs baked in a rich tomato sauce with mozzarella, parmesan, vine tomatoes and topped with pancetta. It was served with crusty brown bread and it was amaaaaazing. Take a look! 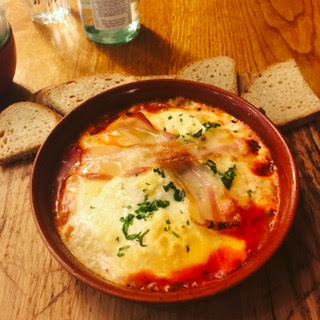 After that, we hopped two connecting trains and made our way to the Cutty Sark stop, which is closest to the Royal Observatory. Even so, it's a 15-20 minute walk, depending on how often you stop too ooh and ahhh at all the shopping and restaurants in Greenwich, or how much of a leisurely stroll you want to take through Greenwich Park, which is pretty large and gorgeous. Mostly it depends on how long it takes you to climb the damn hill, which is far steeper than you think it is until you start climbing. Here's the view, looking back. 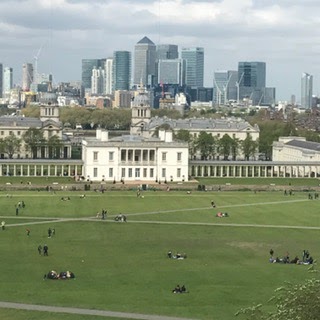 Anyway, once you get to the top, you end up in the courtyard between the observatory and the science center/planetarium, and if you do it on Good Friday (like we did), you'll be there with approximately half of England. Maybe more. I tried to get a shot of the prime meridian (Greenwich is where we get the phrase "Greenwich Mean Time") but there were people swarming all over it. This was the best I could do: 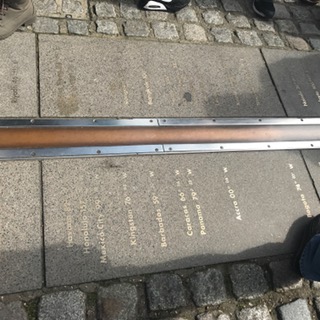 From there, we headed inside, fully planning to grab our tickets to the star show at the planetarium and spend a few hours touring the observatory and space center until it was time to go to the show and have our chat with a real astronomer afterward!

All the planetarium shows were sold out. I mean all of them. All day. And we couldn't get into the planetarium without a ticket, of course, so there went Anna's much-anticipated chat with the lady astronomer. We tried to make the best of it, and pushed our way through the crowds at the observatory, which was incredibly cramped but that's expected, being a very old building with half a first-world nation visiting. 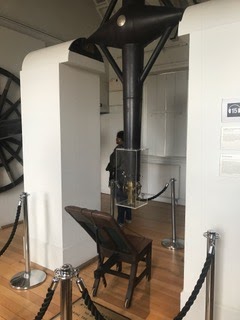 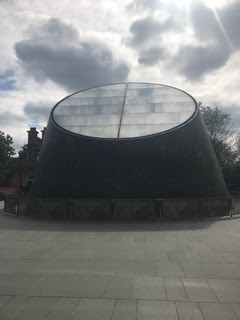 The next disappointment was the Science center itself. Their website makes it look incredible - full of exhibits and space movies and hands-on stuff. We figured we could hang around an hour or two there, easily. But it's small. On an uncrowded day, it couldn't take you more than 20 minutes to see it all. On this particular day, fully half the exhibits were out of working order. Some were just broken, and one whole room was dark with a measly couple of posters on the wall - obviously it was a work in progress but it wasn't shut off or explained in any way. The rest of it was impossible to get to, due to the crowds.

We bought a couple of things in the gift shop, but Anna was so miserable over the experience (and who can blame her - this was supposed to be the highlight of her trip) that we just cut out of there after half an hour and made our way back into town.

We had a lovely meal at a little french restaurant where we got this gorgeous loaf of bread with lunch: 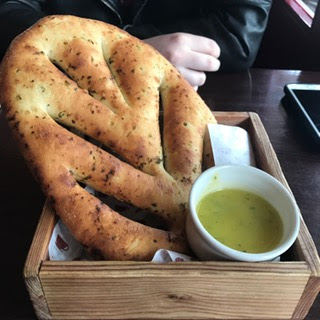 And I got myself a large coffee with Bailey's: 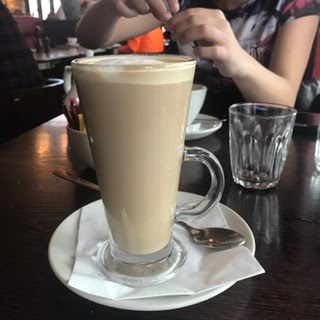 After a good meal and a happy coffee, we were in a far better mood, and there was a tall ship festival at the pier so we headed down that way. In addition to the ships (including the Cutty Sark, which is moored there and you can tour) we saw a few others but I really do mean a few. It wasn't a big festival, I guess, but it was fun. 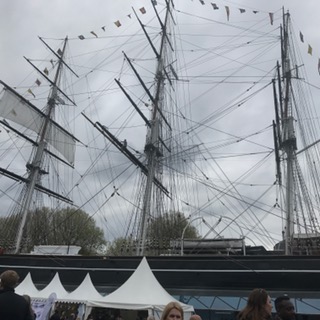 There were food booths and drink booths and live music and traveling street performers: 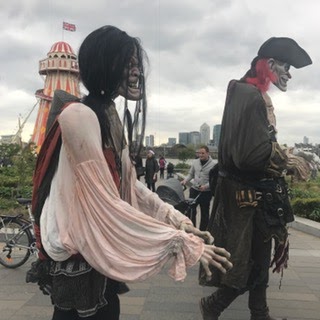 I even got "Aaarrrr'd" at by a pirate, but he was easily sixty and easily sixty pounds overweight. At my age, I shouldn't be too picky but since I had Anna with me, I decided to give him a pass.

We headed back to the tube, stopping along the way to take a picture of this statue of William IV, otherwise known as the "Sailor King." 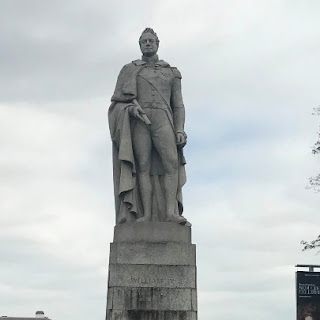 He was a lifelong officer of the Royal Navy until his two older brothers died without issue, leaving him to take the throne at the age of 64. Can you imagine? Probably not the retirement he thought he'd have.

Then to perfectly end our day, we were running for a train, and as I jumped aboard, I turned to warn Anna to get away from the doors, as I was sure they were closing. My warning came a second too late. They had closed. And Anna was on the train platform, shaking her head and rolling her eyes while my frantic hands pried at the door and my panicked face pressed against the glass as we pulled away.

My logical mind told me we were only going two stops, and the trains run every few minutes, and she was sixteen and knew where we were going and I just had to get off and wait for her.

My Mom mind imagined every horror and terror your mom mind never wants to imagine. I saw myself waiting for hours, because she met every serial killer in London on that platform. I saw myself calling her father to explain how I lost our kid in London. I sat on that train platform, sweating and hyperventilating, until she stepped off the very next train a little over ten minutes later. That was ten minutes of pure hell, even though it was logically not a big deal.

She spent the rest of the night using it against me though. "Mom, can I buy this? You did leave me on a train platform, remember?" or "Mom, will you go get me a snack? I don't feel like getting out of bed and you did abandon me, remember?"