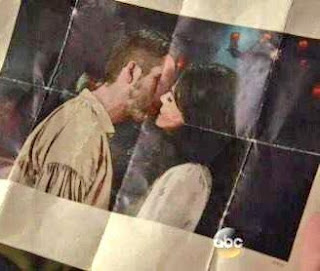 Tonight we begin with a flashback to the Enchanted Forest, where the Evil Queen is searching unsuccessfully for Snow White. Daddy Henry warns her once again that revenge on Snow isn't getting her any points with the villagers, and in strolls Tinkerbell.

It's great to see her, even though I have no idea how the hell that fits in continuity-wise since she's supposed to be in Neverland, but whatever. Tink reminds Regina she threw her chance at love away and then begs her to go find the guy with the Lion tattoo and take a chance on love. The Queen is hacked off, but she spares Tink's life so we can meet her later in Neverland, I guess.


Forward to Storybrooke, where the Evil Queen and Robin are having a discussion about being evil ne'er do-wells. She offers to send him back to his realm if he agrees to steal something for her and then she takes him to a graveyard, hands him a shovel and commands him to dig.

"Couldn't you use magic to dig this hole?" He gripes, and he's got a point. She could have at least magicked his shirt off or something.

Robin unearths the golden shears, and the Evil Queen plans to use them to finally separate herself from Regina.

Across town, Emma is showing off her ring to Snow while Henry recites a few scripted lines with all the passion of an awkward grade-schooler who forgot to go potty before the show started. Regina and Zelena show up to let them know the Evil Queen is on the loose, and Regina is genuinely happy for Emma's engagement news.

Over at the docks, Killian is brooding, because he does that so damn well. Up walks Captain Nemo, who's come to say goodbye. No Liam, though - because now that Killian's finally building a family he wants nothing to do with his half-brother, I guess. Nemo realizes something is up and Killian moans about his situation, finishing up with the ever-prophetic "Villains don't get happy endings."

Nemo's having none of this wallowing. "Guilt can be as corrosive to your soul as revenge. Learn to forgive yourself," he advises.

Henry heads over to Regina's house, looking for the author's pen. The Evil Queen takes it, making sure that Henry doesn't rewrite her story. Henry lets her know he believes there is good in her, and the Evil Queen clearly loves Henry, regardless of her dark tendencies.

The Evil Queen sends the remnants of page 23 (fist pump for the episode title!) to Regina, the one with the alt pic of her happily ever after with Robin. Regina has decided to confront the Evil Queen alone. "Our fight ends today," she says ominously.

Flashback again to the Enchanted Forest, and Daddy Henry is having the "Revenge won't make you happy" talk with the Evil Queen. He offers to help her by giving her a spell book of Cora's that he'd hidden from her. Inside it is a map that will take her to a powerful object that will then help her find Snow White.

So off they slog through the snowy forest, where they find a magical doorway. The doorway is charged with light magic and Daddy confesses that Tinkerbell showed him how to get there. He's tricked her and wants her to find hope.

Through the doorway, they find a statue of Cupid, and Cupid's arrow will take her to the guy with the Lion tattoo. Would have loved for them to have had the real Cupid waiting for her. Anybody remember Karl Urban as Cupid on Xena: Warrior Princess?

Oh, the fun we could have had with that. But it's all for nothing anyway - the Evil Queen is still bent on revenge. She uses one of the spells from the dark spell book to change Cupid's arrow. Instead of taking her to the one she loves the most, it will now take her to the one she hates the most.

She fires the arrow, and it goes straight to her castle, embedding itself in a mirror, showing her that truly, the one she hates most is herself.

Forward to Storybrooke, where we have a bit of saucy fun with Robin and some enchanted rope. I must say, they're giving alt-Robin some season 2 Hook-esque naughty lines, aren't they?

He tries to talk the Queen out of killing Regina and into releasing him, and even postulates that he may be there to save her, and not Regina. He asks her to go back to the wish realm with him.

Back at the house, Killian is putting his unhappy memory of murdering David's father into the dreamcatcher, but Emma catches him.

Emma, who has never met nor seen a picture of her grandfather, recognizes him from across the room in the magical dreamcatcher.

"We have to stop hiding things from each other!" Emma insists. Killian wallows for a bit in his own self-loathing and she rags on him for not automatically assuming that her parents will forgive him. She hands back the ring and lets him know they'll talk again when he sorts himself out.

Killian heads back to the docks to wallow some more (why the hell doesn't he just go hang on his ship instead of in front of the cannery? That can't be terribly pleasant). "I'm not the man she needs me to be," Killian whines as Nemo stops by. Then he asks Nemo if he can leave with him on the Nautilus.

Captain Hook. A man who crossed realms, sold his ship, faced death and is the epitome of perseverance in the face of anything trying to thwart his love with Emma is going to just turn tail and walk away. After Emma made it clear that she's okay with his murdering past and loves him anyway and still wants to talk. Right.

Regina shows up at the mayor's office and the Evil Queen is waiting. After poofing Robin away, the Queen draws the shears and severs the bond between them. Then they have a sword fight 'cause that's all kinds of hot. Regina bops her with a bowl of apples then pins her to the wall with magic.

Just as she's about to crush the Evil Queen's heart, she sees herself in a piece of broken mirror and realizes she doesn't hate herself - not anymore.

"I'm going to be brave for both of us and choose love over hate," she says, holding both hearts together and giving them both a mix of light and dark before she returns the heart to the Evil Queen's chest.

I love myself," she tells her. "And so should you."

The Evil Queen has sent alt-Robin back to his reality, and Regina realizes that Tinkerbell was wrong - if she'd gone after Robin originally, she wouldn't have the same love and friendship she's got surrounding her now. Of course, she could have had a lifetime of love with Robin, and children, and loads of friends because she would have been a happier person from the get-go, but that's neither here nor there nor part of the plot.

The Evil Queen wants a fresh start. Regina asks Henry to take the magic pen and write her other half a new story . Snow and Zelena are skeptical, but Regina asks them to give the Evil Queen a chance. Henry reaffirms his belief in her, calling her Mom, and the Evil Queen is deeply touched.

She apologizes to Snow for everything, thanks Regina, and Henry writes her a fresh start story.

The Evil Queen poofs back to the tavern where Robin is drinking, ready to open that door and take a chance on love. It turns out this is alt-Robin, and together they decide to make a go of this fresh start together.

Back in Storybrooke, Killian's still standing at the snowy pier, and Snow catches him trying to leave. She tells Killian that Regina redeemed the Evil Queen. "Love can save even the darkest souls - you just have to believe in it," she tells him.

We can see that her words have hit their mark. Killian heads on board the Nautilus to say goodbye to Captain Nemo. (And in a strange bit of continuity screw-up, they intersperse this with Emma coming home and not finding Killian there, with daylight streaming in all the windows even though we clearly just saw Killian standing in the dark at the docks - maybe we're supposed to infer that he was gone for hours?)

Just as Killian is saying his goodbye (and again, only to Nemo - the hell with his half-brother), Gideon poofs on board and submerges the ship, sending it on it's way so that he won't have interference from Killian.

Back at the house, Emma realizes Killian is gone, and sadly turns out the porch light.

I'm giving this one four glowing hearts out of five.

It was great to see Regina finally embrace herself, both literally and figuratively, and I'm sooooo freaking glad Emma gave that ring back so we can maybe get a proper proposal eventually, but there were things that fell just short of the mark in this episode for me.

My thoughts:
What did you think of the sort-of Evil Queen's "fresh" start? And what about Killian and Emma's predicament?