Once Upon A Time – Season 6, Episode 13 Recap: Potions, Proposals, & A Whole Lot Of The F Word 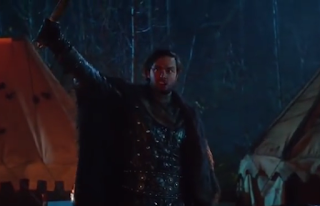 We begin our tale this evening smack in the middle of the first Ogres war, where a nervous young soldier is bolstered by the one and only Beowulf, who possesses the magical sword Hrunting, which is infused with light magic. He leads the attack with sword held high, and the poor nervous soldier gets squished between an ogres toes.

Beowulf takes on the most badass ogre of them all and nearly loses the sword when Rumplestiltskin suddenly appears, killing all the ogres at once with the power of the dagger of The Dark One, thereby ending the war.

Rumple finds himself the center of the celebration at a nearby tavern for ending the Ogres War. Bae is thrilled, but Beowulf, not so much. Rumple gives him back his sword with a good deal of swagger, and an unimpressed Beowulf reminds the townsfolk of Rumple’s cowardly past swearing that they’ll all pay for Rumple’s dark ways.

Baelfire agrees, and begs Rumple to give up the dark dagger. Rumple won’t give it up, but he vows to Bae that he’ll use no more dark magic.

And now we go forward to Killian drinking rum at Granny’s. In strolls Archie (how convenient!) with a friendly ear.

Then Killian confesses how torn he is about telling his secret as he downs another shot of rum.
Across town, Rumple, Blue and Belle are traipsing through the woods looking for Gideon. Rumple rags on Blue for losing the baby in the first place, and throws out how convenient it is that the Black Fairy is trapped in another realm.Isn’t it, though? And isn’t it crazy how we’ve never seen the Black Fairy in the same room with Blue? Just sayin’.

Anyway, Gideon has to find the sword he was carrying (or what’s left of it) before he can kill Emma, so he heads for the sheriff’s office, and ends up finding the sword hilt in the safe. Rumple shows up and knocks Gideon out before he can get away, whisking him away to the strangely intact Clocktower that Gideon blew to hell in the last episode. Oh wait, I know. MAGIC.

Rumple confesses that he embraced darkness to save Baelfire. Gideon reminds him that he’s taking down the Black Fairy and he’s going to do what he has to do. “Giving into darkness can only be dark,” Rumple intones, in his best Captain Obvious voice.

Gideon tells Rumple a sad story about the time the Black Fairy caught him reading “Her Handsome Hero,” and mocked him for wanting to be like the protagonist. She decides to torture another kid, and left his cell door open so he had the choice to try to help. He did nothing, and his cowardice haunted him and haunts him still.

Rumple listens sympathetically, then gives Gideon tea laced with memory potion so that Gideon will no longer remember what the Black Fairy did. Gideon is somehow immune, so he fakes a hug and steals Rumple’s dagger, commanding his help to kill the Savior.

Honest to God, Rumple! How many people have to steal the damn dagger before you find a good hiding place for it? I mean, you can use magic to bury it a thousand feet deep in the dirt or turn it invisible or set such a strong protection spell around it nobody can touch it, but noooo.
Next we go to Robin, who’s alone in the woods looking through the magical potions chest he stole from Emma’s shed.

Regina shows up to apologize for trying to fit him into her empty Robin slot (figuratively, people!) and he agrees to meet her later after he’s had some time for introspection.

Back in time again to the Enchanted Forest, and young Bae shows up at home with a face full of mud. The baker’s kid was bullying him, and Rumple vows to ‘take care of it’. Before he can leave, the townspeople show up begging for his help. Beowulf had gone after Grendel – an evil creature that they didn’t have enough CGI left in the budget to show us. Bae encourages Rumple to defeat the monster without dark magic and Rumple uncertainly decides to give it a try.

As they approach Grendel’s cave, Rumple pulls out the dagger, trying to explain again to Bae the pull it holds over him. Bae astutely compares it to Rumple’s former need of a crutch, and Rumple – realizing the Bae is wise beyond his years – decides to give Bae the dagger so that he can help Rumple avoid the darkness. 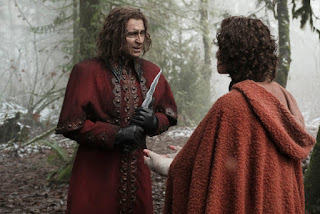 They head into the cave and lo and behold, there’s a pile of corpses, Beowulf’s sword, and a horn that makes absolutely no noise that Rumple determines to be an ogre’s call. Beowulf sneaks up from behind and steals the dagger from Bae, and we learn the real story: He’s been calling ogres so he can look like a hero with his spiffy sword, and Rumple stole his thunder by killing all the ogres. Now he’s going to blame all the murdered corpses on Rumple and tell the townsfolk that he was right about Rumple’s dark magic.

Forward to Storybrooke, and Robin suddenly shows up at Zelena’s. She freaks at first, thinking he’s after the baby, but he’s there to make her an offer. He needs help figuring out which potion will help him break through the spell that keeps them in the town. Except, I can’t remember whether it would work that way. The barrier spell has come and gone so many times, and with so many exceptions, I honestly don’t remember if that makes any sense continuity-wise, but continuity is a moot point on this show anyway, so let’s just move on.


Over at Gold’s, Rumple pulls out a book contains a spell that will restore Gideon’s sword, but it requires the blood of the person that forged it. Rumple begs him again not to snuff out the good inside him. Gideon uses the dagger to demand the name of the one who forged the sword, and it turns out it was Blue, his fairy godmother.

Heading back to the Enchanted Forest, and Beowulf loses the Dark One dagger when Bae ambushes him and steals it back. As Beowulf prepares to strike him down, Bae summons his father to save him. Rumple appears and starts force-choking Beowulf, but stops short of killing him. Beowulf gives a mocking goodbye and throws Bae aside as he leaves, which pisses Bae off good and proper. Bae orders the Dark One to kill the asshole, and Rumple obliges.

Bae wants to hold onto the dagger so he can ‘pay the Baker’s son back’, but Rumple gives him memory tea so he won’t remember how the writers rewrote his character this episode.

When Bae’s head clears, Rumple takes the rap for killing Beowulf, and Bae is horrified at the monster his father has become.

Ahead in Storybrooke, Gideon confronts Blue but before he can cut her, Rumple intervenes, cutting Blue’s hand and taking her blood himself so that darkness of this act won’t touch Gideon. Blue collapses after her magic powers get sucked the hell out of her and into the sword, and Gideon poofs away with his newly restored savior-stabbing implement.

Back at the shop, Belle is pissed at Rumple for knocking out the Blue Fairy, but he explains his sacrifice and swears that once they stop Gideon they can return Blue’s power. Belle is impressed by the way he put his son first and full of hope, she hugs him tight. *sigh* Oh Belle.

At the town line, Zelena shows up with the Evil Queen/Viper in tow. She’s points out the potion that drains magic, and as Robin makes to use it, Regina shows up.

“I can’t live my life as the man who died for you,” Robin tells her. Regina agrees, and then she tells him the potion won’t work – and she’s right. Regina vows to dig through every book she has to find a way to break the protection spell in order to help Robin find his happiness.

Across town, Killian is sitting at Granny’s still tossing shots back before he finally makes his way back home. Emma gives him a kiss and tosses off a snarky, “Oh wow, Captain Morgan! I though you were switching to water.”

Killian, roiling in a sea of self-loathing, admits that he has something to tell her, and Emma promptly steals his thunder by pulling out the ring and telling him (a) she found it and (b) she says yes.
“Just you and me no walls no secrets,” she murmurs. Realizing that he’s only got one course of action, Killian goes down on one knee and asks Emma to marry him, and the freaking writers can’t give us a moment of pure happiness as Killian’s tortured face is what we focus on.

So we finally get the proposal, which should have been a moment of pure joy, and instead the writers give us the most awkward and overshadowed proposal they could write. F--- those guys. Seriously.

And we close out with Zelena coming to Regina to apologize for helping Robin, but it turns out the Evil Queen/viper has disappeared. We see it slithering on a tree before sliding around Robin’s shoulders. and then it bites him, regenerating the queen. It turns out some of the failed anti-magic potion splashed on him and nullified David’s wish. Robin whines that he wants out of this “abysmal hamlet,” but the Evil Queen promises to give him a tour of Storybrooke that will make him much more appreciative.

I’m giving this one a begrudging three swords out of five.

That proposal. What. The. Hell. A moment every single Captain Swan has been waiting for since the moment they climbed a beanstalk together, and this is what we get? A fumbling proposal and a world of self-loathing in his eyes instead of candlelight on the deck of the Jolly with a million stars overhead and true love rippling out like a tidal wave as we all cry happy tears of joy. I feel so utterly cheated, and I want to punch the writers right in the soft and personal parts for it.I really do.

And don’t get me started on our new young Bae. They gave him ugly hair and an ugly thirst for blood and then poof! A little dose of memory potion turns him back into the lovable poppet we remember.

My thoughts:
Lay it on me – how much did you hate that damn proposal? And what did you think of the all-new Bae?
By Ellie DeLano - March 20, 2017