Once Upon A Time – Season 6, Episode 11 Recap: A Swan By Any Other Name 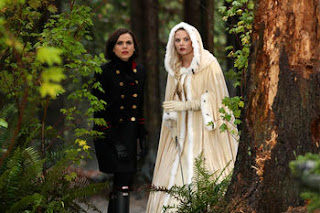 Hallelujah, the hiatus ends at last! And with the fate of our dear series hanging in the balance, we take on this second half not knowing where the hell we're going, which is pretty much how this show has felt since about season three, so I'm game.

We begin this evening in Minneapolis where grade-school Emma is living under a bridge and burning pages from a book to stay warm. A mysterious boy-band wannabe begs her not to burn her book - especially the story about the Ugly Duckling. "The best fairytales are about transformation," he tells her. "The duck was always a swan, but didn't know it," Emma disagrees. He reminds her that the duckling had to believe strong enough in order to become a swan.

Later we see her turning herself in to the child welfare office that her new friend brought her to. Young Emma gives herself the new last name of Swan.

Forward now to the Alternative Enchanted Forest, or Alt-EF, and Robin is busy robbing the hell out of Emma and a very numb and freaked-out Regina. Prince Henry shows up looking positively seething on horseback:

See how he seethes? That face is his acting face, I guess.

Anyway, Henry chases Robin away as Emma hides Regina. Then Regina channels her inner viewer and asks, "Why didn't Robin age? Everyone else over here did," To which Emma replies, "It just so happens to be that way and stop questioning, you're dragging the plot down."

Meanwhile, in Storybrooke, Killian is with David, who is stalking the streets and determined to hunt down the mysterious cloaked figure. He feels like this is all his fault because of the wish he made to give the evil queen what she deserves, and of course, being David, he's self-flagellating over it.
Across town at Gold's, we learn that Gideon is the requisite 28 years old and has spent most of his life tortured by the Black Fairy. She failed to make him evil, though because he remembered Belle and her innate kindness. Awww. And of course, he wants to kill Emma so he can steal her savior powers, because there's some new rule about succession that says you get your savior powers not from white light or true love, but from murdering the savior before you. Anyway, once he's got those powers, he's going to use them to save another realm toiling under the cruel power of the Black Fairy.

Back in Alt-EF, Emma seeks out our good friend August, a.k.a. Pinocchio, who has now taken over his Daddy's shop.

He believes in her outlandish story of another realm, and she asks him to carve a new magical wardrobe since he destroyed the old one because it reminded him of darker times. Regina remarks that the world became so much better after she was gone. She leaves Emma a gorgeous calligraphied note that she managed to scrawl in 2.8 seconds and goes after Robin to find out if he, like the rest of the world, was better off without her.

Regina heads to the tavern in Sherwood Forest where she first had a chance to find him as her true love. The place clears out as soon as they see her and Regina wastes no time in asking Robin point blank: Are you happy? He gives some jaunty reply and in walks the Sheriff of Nottingham, who slaps a magic dampening cuff on Regina before he captures Robin as well.

Over on the other side of alt-ville, Emma goes with Pinocchio to find a new enchanted tree, planning to use Gepetto's magical tools to carve it out. Emma lets him know that she's destined to die being a savior, and just as Pinocchio gets ready to carve, he's waylaid by a fat, despotic, gray-haired Killian Jones.

OMG I am dying. DYING.

Despotic Killian is there to find Emma the kidnapped Princess and claim the reward. He's obviously lived a wastrel's life of rum and excesses, and his eyes kind of look like this:

He's disarmed quickly, and channels his best Jack Sparrow as he tries to duel Pinnochio with the magic chisel. Emma finally blasts him, remarking as she stands over him, "I need to get someone off rum . . .and dessert." She poofs him back to the Jolly, but it's too late to fix the chisel, which is broken. Pinocchio gets all pissy because you need magic to carve the tree. He's not good enough to do it without magic, he says, and he storms off.


Back in Sherwood, Regina and Robin are in a jail cart and Robin's not terribly thrilled that she got him there. She reminds him that he steals from the rich and gives to the poor and he disabuses her of that notion. It turns out that Marian died before they could marry over there, so Robin's never known love, or had a family. Instead, he's remained a common thief, never aspiring to anything more. Regina asks him again if his life makes him happy, and he tells her truthfully that he hasn't been happy for a very long time.

Regina is pleased to see him and after he breaks them out, she asks him to take her cuff off. Rumple's not interested in helping her since she starved Belle to death and he even has the bag of bones to prove it (because he'd just tote them around instead of giving his beloved the respect of a proper burial). He locks Regina and Robin in his dungeon, giving Regina a chance to give Robin the scoop on his short-lived but honorable alternate life. Robin thinks that sounds swell, all but the death part, and busts them out of Rumple's dungeon.

Over in Storybrooke, Rumple decides to have a heart-to-heart with Gideon, who refuses to be dissuaded from his fate. "There are things a man learns," Rumple tells him, offering to help. Gideon politely declines:

Rumple and Gideon get into a pissing match over who had a rougher childhood. Rumple gives Gideon a pansy-ass tap to the face demanding that he hit him back. Gideon's hand starts glowing in a freakish way, and he nopes the hell out of there.

Across town at the loft, Belle shows up in the middle of David's soliloquy to sleeping Snow to let him and Killian know that mysterious guy hunting Emma is her son. She is sure that she can stop him and she begs David to save both their children.

Over in the Alt-EF, Emma's trying to smack the enchanted tree with a hammer and among Geppetto's tools she finds an old box with her name on it, and a carved wooden swan inside. She puts two and two together, realizing that August - Pinocchio - was the boy who spoke with her about the story of the Ugly Duckling all those years ago. She gives him the broken chisel, telling him to believe, and he begins to carve. It works, of course.

Regina rolls up as the wardrobe is being finished, and fully intends to say goodbye to Robin. He gives her a feather - his lucky feather of plot convenience - and she mentions the feather that showed up after he Robin died and how it makes her feel like he's still existing somewhere. Emma tells her that the feather shows that part of Robin is in this guy and that's why he hasn't aged. She encourages Regina to bring him along. Robin wants to do it, but Regina cautions him that it may not work.
"Why not get to know the woman one version of me was willing to die for?" He asks.

Excuse me a moment

Pinocchio tells Emma to leave the sword behind, since it's the sword she sees running her through in her vision. Emma declines, determined to make her own fate. She steps into the wardrobe and shows up in the middle of the forest, and then Regina explodes through. The tree is destroyed, and no Robin in sight. He puffs through a moment later and Regina hugs him tight before giving him the grand tour of Storybrooke. And I guess he's Robin of Loxley now, never having been Robin Hood.

Emma walks down the darkened main street of Storybrooke, only just realizing that this is exactly where she dies and under these exact weather conditions.

She fights Gideon and he takes her sword just as all the main characters (except Snow, who is sleeping her hidden pregnancy away) rush up. He freezes them all in place as Emma's hand starts doing the "Savior Shake." Then before he can make the fatal thrust, she blasts him with her powers, shattering the sword. As she holds a shard of the blade to his throat, Rumple pleads for his son's life - but Gideon poofs away.

And now it's time for awkward introductions as Regina explains that she stole her dead boyfriend back from another realm. Robin is taken aback by the sight of Killian, mentioning that he certainly "looks a little more spry" over here. Killian's not liking the sound of that, and it gets even better when Emma hugs him, urging him to "Switch to water."

"What, for drinking?" He asks in confusion. Oh please, give me at least one episode with Killian on a low-carb, gluten-free diet. Let him eat kale!

Emma goes and finds August, who is in his Dad's workshop, writing on his typewriter. He confesses to being the boy who clued her in about her destiny. She kept the pages of the Ugly Duckling story all these years, and he tells her that picking her last name made him know she was on the way to becoming the person she's supposed to be. Belief is the first step, he reminds her.

We finish off with Belle at the wishing well, having a conversation with the ex about their kid and who the hell is putting money in the lunch accounts this week because oh my God, I swear it's always me! What's forty bucks when you out-earn me by one hundred and sixteen percent!

Anyway, Rumple wants Gideon to make better choices. "My whole dark life, I've sought out those who are light," he tells Belle. He finally admits his addiction to the darkness, but he doesn't want it for his son. Rumple suggests that they team up to save Gideon because if they fail, "War is coming to Storybrooke." This ominous pronouncement is made just as we watch Gideon with his magic smoldering hand punch the everloving fugg out of the clocktower clock, shattering it.

I'm giving this one four bottles of rum out of five.

I loved seeing the story of Emma's name, and I am strangely fine with Regina and Robin falling in love all over again. Despotic Killian was hands-down the best part of the episode, but I still really don't like the clunky way they tried to explain Robin's youthful appearance. If there's an echo of his dead self there somehow, wouldn't that be true of everyone who died? They missed a golden opportunity to tie that together - after all, the Evil Queen made the wish, and therefore the "wish reality," and haven't we established that she and Regina are still one and the same? So Robin is an extension of that wish, or should have been presented that way. That's how I'd write it, but what do I know? I'm a mediocre blogger and they're making the big bucks.

My thoughts:
What about you? What did you think of our bloated rapscallion?
By Ellie DeLano - March 06, 2017