In Defense Of The Girls Who Don't Hang With Girls Much 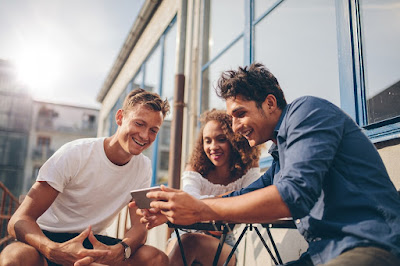 I have a confession to make, and I know it's going to get me in trouble.

I'm one of those girls. A girl who doesn't have a gaggle of girlfriends they hang out with. Or even one girlfriend they call everytime there's good news or bad news or even no news but they just have to call anyway.

And that's not to say I don't have female friends, because I do, and more than a few. I've met most of them through work, or they're in the neighborhood. If they invite me over, I almost always go, and I extend an invitation anytime I have something going on at our house. Since the divorce, that doesn't happen much, though. At work, I have lunch with them and I share my home-baked goodies whenever I bring them in.

But I just didn't get whole, "I need my girlfriends around me," thing.

I pride myself on being really self-sufficient, no matter what gets thrown at me. Sometimes, I need a friend, but I don't have this deep, emotional need to connect specifically to another female when I do - I could go either way.  Maybe because I grew up with no sisters, or even female cousins in close company. Maybe it's because I had a contentious relationship with my own mother for a lot of my life. Whatever the reason, I don't need my sisters around me to feel empowered. I totally get that some of you, do, though, and more power to you.

The problem is, when you mention you hung primarily with guys back in your single days, or that you don't hang out with chicks much in general, you get labeled as one of those girls. Women haters. I've been told in internet forums more times than I can count that girls who don't hang out exclusively with girls for fun and friendship aren't trustworthy. They've got something wrong with them. They have no self-esteem so they have to hang with guys to bolster it.

I've met some of those girls. But I think that's an awfully narrow brush you're trying to paint a wide swath of women with. Guys, by and large, are just a lot more chill and a lot less likely to talk about you behind your back. And what the hell with frenemies? I've never had a frenemy in my life! You're either my friend or you're not. Guys don't do that stuff. At least, it always seemed that way to me. I'm tired of apologizing for not having a pack of women to belong to.

I cherish my female friends. Sometimes, I need their point of view. I cherish my male friends, too, and for the exact same reason. And I should be allowed to prefer to hang - or not hang - with either set without it meaning anything more than that's how I feel like rolling right now.