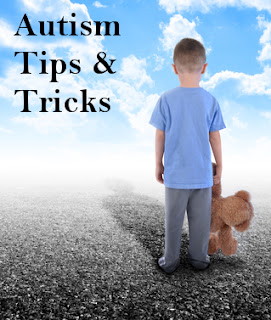 I was talking with a friend this weekend who has a newly diagnosed child, and she asked me if I had a section of the blog for tips and tricks - all the little workarounds we use with our spectrum kids, with their therapists, and doctors and teachers.

I've been running this blog for six years and it never occurred to me to put stuff like that all in one place, which is really puzzling because when David was first diagnosed, I read stuff like that voraciously anywhere I could find it on the internet (or in a bookstore or magazine).


It bears saying that my tips aren't going to work for every kid on the spectrum. Your mileage may vary. Glean from these posts what you will and feel free to modify for your child's needs. I'm going to try to make this a weekly feature, but with the book launch, I can't promise just yet. I will try to get at least a few of these in every month.

Today, we're going to talk communication - or lack thereof. TV and movies tell everyone that people with autism are highly intelligent geniuses who are incredibly verbose, but have poor social skills. While autism is a spectrum and that does represent some of the people on that spectrum (usually those with an Asperger's diagnosis), it doesn't represent the entire spectrum or even the majority of the spectrum. Most of us have a very hard time conversing with our children, or teaching them how to carry a conversation on their own with a peer.

Here's the deal: When you ask someone on the spectrum a question like "How was your day?", there's a lot going on. First, they have to sift through all the potential answers to be sure they're giving you an appropriate response. Kids on the spectrum don't usually have much of a filter, and they've probably been verbally smacked down for it enough to make them tense at the thought of not giving you the socially correct answer. If there is any sort of stress associated with their response (like they had a bad day because of _____), their mind will be dwelling on that, and the stress of being stuck on that repetitively playing in their mind makes finding the proper words to communicate all the more difficult.

One of the best ways to remove some of that stress is to not make it a question. Use a declarative sentence instead to lead the conversation, and give them a stress-free way to contribute with an affirmative or negative response.

For instance, "How was your day?" becomes "Today was a fun day!" or even "Today was a tough day, with that test in math." This gives your kid a chance to say, "Yeah, today was fun." Or "Yeah, that test was tough but I did good on it."

Here's a great resource I found that will give you a better idea of what I mean (click to enlarge): Communication is a stress all by itself for a person on the spectrum. Pulling that question mark from the end of the sentence is like loosening a rope around their neck so they can breathe. I've found this very, very helpful with David, and it's made a big difference in the manner and frequency of his conversations.