When You're Torn Between Fervent Applause And Cringing Discomfort 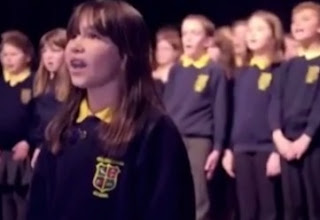 One of things about being an autism mom and and autism blogger is that people forward me and send me links all the time. The more popular links end up hitting my inbox several dozen times, and that's okay. I'm thrilled that my friends and readers notice and share articles about people on the spectrum and I hope they continue to do so.

Just before Christmas, the link I was getting a few times every day was for this stunning performance by a young girl:


Kaylee Rogers, who has autism and attention deficit disorder, sang the song at Killard House School in Northern Ireland. Her fellow students sang beautifully in the background.

This girl and her schoolmates rocked it. The performance is amazing. As the mother of a child with autism (who also sings like an angel), I felt a lump in my throat and chills go down my spine listening to this.

And then I realized the song I was listening to wasn't Leonard Cohen's Hallelujah. It had the same tune. The word Hallelujah in the chorus was the same, but that's where the similarity ended. The song was now a Christmas hymn celebrating the birth of Christ to the tune of "Hallelujah."


The fault isn't with this little girl, of course, and her teachers didn't rewrite the song, a Kansas Christian band named Cloverton did. Originally, the band sought permission from Sony to make a new version of the song for their fans, and Sony granted that permission. But once it went viral and it was clear they'd changed the lyrics completely, permission was rescinded. The video was ordered to be taken down, and the band complied. That didn't stop a whole lot of people from posting their own copies, however (and many have been pulled at the request of Sony Music).

The lead singer of Cloverton was quoted in this article about the takedown order from Sony.


“When we rewrote the lyrics, I had no idea Leonard Cohen was Jewish. The song was written by a Jewish man, but it’s not a Jewish song, I would say. If it were, it would have been more obvious not to touch it. We didn’t perceive it as a song celebrating Jewish culture or written for Jewish people.”

How the band didn't realize that Leonard Cohen was Jewish is beyond me. Cohen is a fairly common Jewish name, and a little research on their part into the artist and his background would have been the respectful thing to do before commandeering his song. Regardless, as artists themselves, they should have never considered rewriting the lyrics to the song in its entirety for any reason.

Cohen's father was the founding President of the Canadian Jewish Congress and his mother was the daughter of an esteemed Talmudic scholar. While Cohen would most likely have celebrated a group of talented performers covering his work, I very seriously doubt he'd be thrilled to hear his song rewritten to accommodate another religion. And it's easy to say, We don't know what he would or wouldn't have liked - but that's the point. He's not here to defend himself anymore, or his song. And he shouldn't have to.

It's like taking the Mona Lisa to a children's art show and then using crayons to color in a hijab over her hair. They've defaced an artist's worked and skewed its original intention to accommodate a particular religion (a religion not shared by the artist who wrote the song - which is very disrespectful to his faith). Regardless of this girl's amazing and heartfelt performance, that isn't right. They could have chosen "O Holy Night" or any one of hundreds of beautiful Christian-themed Christmas songs. This girl would have sung it (or anything) tremendously well.

This isn't a bash against Christians at all. I was raised Evangelical Southern Baptist. I grew up knowing that Jesus was the reason for the season. But Jesus was also really clear about a few things - first of all, "Fear God and Honor the King" - in other words, you are subject to the laws of the land. That includes copyright law. And "As ye would that men should do to you, do ye also to them likewise." In other words, respect your neighbor as you'd like to be respected yourself. That means respect their hard work, respect their faith, respect their rights.

So, while I celebrate young Kaylee and her friends, as well as her teachers and therapists for all the work they put into this, I can't say I feel terrific about it. Taking an artist's copyrighted work and altering it is wrong. Using that altered work after the owner of that copyright (Sony Music and Cohen) asked for its removal is unethical, and worse, illegal. No matter how heartfelt the sentiment behind it, or how great the cause of the group performing it, it's still morally and ethically wrong.

It's just such a shame that this performance has to fall under that shadow, because these kids deserve every bit of praise anyone can heap on them. I just hope the teacher and administrators take the higher ground next time, and give them a song worthy of their talents to perform.