Once Upon A Time – Season 6, Episode 10 Recap: A Brief Glimpse Of Might-Have-Been 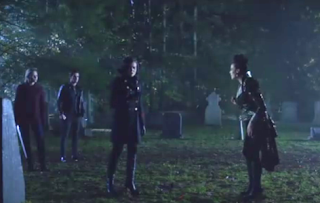 Tonight we begin with Regina, Killian, and Emma (with sword in hand) heading for Regina's vault, only to encounter the Evil Queen. She's standing over Robin's grave and goading Regina, who takes the bait and cues up a fireball.

Then she takes a few digs at Emma and her sleep-cursed parents, and Emma loses it, taking a swing at the Evil Queen with the mysterious sword - and draws blood without putting a mark on Regina. Now they have a weapon capable of killing the Evil Queen, so she gets the hell out of dodge in a poof of smoke.

Unfortunately, she poofs away only to get waylaid by Rumple, who's thrilled to know that Emma can now kill her. He puts a tracking cuff on her, vowing to finish the job if Emma doesn't.

Meanwhile, over at the loft apartment, Snow is sleeping as Henry begs Emma not to try to kill the Evil Queen. Emma reminds him that she's the savior, then she tells Regina to hang tight with Henry and she takes off to handle things, flanked by Killian and David.

Here's a shot of Emma and Killian, because they get
exactly seven-tenths of a second together in this episode


As they're walking, they hear Jasmine call out from Granny's and they rush in - sure enough, the Evil Queen shows up. She holds Jazzy hostage, and gives the lamp a rub, summoning Aladdin and using her wish to have all three men in the room suddenly naked and well-oiled.

No, instead she decides to grant Emma's wish from a few episodes back: that she would never have been the savior.

Emma promptly vanishes, giving Killian a chance to bellow. He does it so well.

Flashback - or should I say sideways - to the Enchanted Forest that might have been, where Princess Emma is wishing on a blue star candle for her birthday, claiming that she doesn't need to wish for a thing as she has everything and is perfectly kittens-farting-rainbows happy.

Then she tells her parents about her fantastical dream of another place where they were still fighting the evil queen - who is long since banished from the land. Emma also strangely found the sword under her bed, which Snow just shrugs off because that kind of shit happens all the time in a castle. Mysterious swords appearing or being lobbed by watery tarts - it could happen.

Into this scene strolls young Henry, who - in this alternate world where Emma was never a savior - should not be named Henry (after all, Regina named him for her father. Why the hell would Emma give him that moniker?). He spies the sword, thinking it's a gift for his knighting ceremony the following day. Because he's Prince Henry, heir to the throne after her. And also a knight.

Emma hands over the sword to Henry, telling him that his father would have been very proud of him, and we pan to a painting of Neal in full Enchanted Forest regalia. "Oh Henry, put that thing away," chides Snow. "This family is done fighting."

Back over in Storybrooke, David, Killian and Regina are bickering over where Emma might have gone and they all seem unreasonably pissed off at each other for it. Snow is snoozing away in the background, and I can't help but wonder how nice it must've been for Ginny Goodwin as a pregnant mom of a toddler to get to sleep on the job. Anyway, Regina gets an idea of how they might thwart her nemesis.

Over at the mayor's office, Aladdin is pouring the Evil Queen a drink. She's getting more than a little creepy-rapey and Aladdin voices what we're all thinking: "Ew."

When David, Killian and Regina storm through the doors, she reminds them that "You can't undo wishes," and Aladdin acknowledges her words. Then Regina pulls the old switcheroo. Since she and the Evil Queen are, for all intents and purposes, the same person - she uses a wish and asks to be sent to "the same place as Emma Swan."

She appears in the forest, and runs into the dwarves, who are less than thrilled to see the formerly banished Evil Queen. Grumpy starts shouting a warning, as he is wont to do. As Regina wanders deeper into the wood, we hears someone humming "Someday My Prince Will Come" and it's Emma, perfectly princessy in pink as she gathers flowers in the forest.

"My parents banished you!" she cries, as Regina jumps out and tries to explain the situation to her. A moment later, an arrow cuts the air and Regina turns to greet Snow and David.

"You're so old," she says in disbelief. David is bent on capturing her for the good of the kingdom, so she poofs out of there to regroup.

Back in Storybrooke, David is fuming and determined to get that lamp. Killian tries to talk some sense into him, and together they come up with a plan. Or David does. And he ain't telling anybody what it is, of course. Instead, he goes it alone and attacks the Evil Queen. She tosses him around like a rag doll, and while she's monologuing, he grabs the lamp.

"All wishes come with a price," Aladdin warns him, so David chooses to wish vaguely that the "Evil Queen gets exactly what she deserves."

Anyway, it seems to have no effect, and the Evil Queen damn near kills him before Killian shows up to save the day.

Over in the Alt-Enchanted Forest, Regina heads to the mines where she finds Rumple, still in his cage.

He tells her he's angry because she failed in her use of the dark curse, and my head just imploded. If Baelfire were around to father Henry (who shouldn't be named Henry), then why is Rumple in the cage? As if he'd allow that while his boy is back in the Enchanted Forest. And if his boy was back in the Enchanted Forest, Rumple wouldn't have needed the dark curse, either.

Okay, enough trying to make sense of things. There's no place for that here. Let's move on.

Rumple is intrigued with the idea that the reality they're in is fake. He asks for his freedom, but Regina refuses to make the deal. He tells her that it's her fault Emma became the savior - since she was the savior's villain. He further suggests that Regina show Emma her darkness, and the savior will be reborn to answer to it. He also offers to get her back to Storybrooke via magic bean, and Regina finally takes the deal and frees him.

Speaking of Storybrooke, Rumple is now in his shop, and he raids Belle's hairbrush, adding a few his own formerly-flowing strands and sprinkles them over the magic locator globe, commanding it to show him his son. It doesn't work.

He finds Belle, who is sitting in the fog clutching her son's teddy bear. Rumple removes the tracking cuff he'd put on her and asks for her help in making sure their son is safe. He begs Belle to call the convent, and when she does, the news isn't good.

They rush over to find Blue bedridden and bedraggled. She was found in the forest and tells them the grim truth: the Black Fairy took their son.

Meanwhile, in the Alt-Enchanted Forest, it's now the day of Henry's knighting.

Big shout-out to costumes and CGI for this scene - it looked amazing!

Suddenly, Regina (dressed as the Evil Queen) shows up, threatening to wreak havoc. Emma's a complete milquetoast and begs mercy instead of fighting her, so Regina poofs herself away with Snow and David, hoping Emma will come after her.

Emma shows up at the castle and offers Regina the key to the kingdom in return for the lives of her parents. Regina tells her she needs to get back to Storybrooke, and Emma visibly starts at the name. Regina finally rips out Snow and David's hearts, threatening to crush them to get a reaction, but Emma cries and sobs and watches as Regina crushes them both (and I'm sorry, but that was really funny. They were just like "uhhhh" and then they slumped in perfect unison. I wonder how many times they had to practice that?).

Emma won't fight Regina, but Henry shows up and announces that he's going to take over. Regina refuses to fight him, of course. He throws the sword (great hat-tip to season 1), but Emma stops it mid-motion because Regina not being able to hurt Henry brought Emma's memories back. She realizes now that she's in a made-up universe so they decide to head back to Storybrooke to go and stop the real Evil Queen.

Back in town, the Evil Queen is taking a victory stroll down Main Street when Granny's lights up and Leroy starts screaming about portals. The hooded figure from Emma's vision bursts through the door and goes after the Evil Queen, changing her into a cobra and imprisoning her in a cage.

Over at the apartment, David decides not to take a chance with TWO MORE FREAKING WISHES AT HIS DISPOSAL and won't try to use one to wake Snow from her curse. He's awash in self-loathing, and Killian's good and fed up with it.

"We all make mistakes - that makes us who we are," he snaps at David. "Now go kiss your damn wife."

David hands the lamp back to Jasmine, and Aladdin leaves the Scarab of Agrabah with Henry to pass on to Emma. Jasmine makes her wish to return to her home city and the two of them poof away.

There sure is a helluva lot of poofing in this episode.

Across town at Gold's shop, Rumple lets Belle know that it wasn't him who magicked her pregnancy. And he confesses he's seriously worried about their son being in the company of the Black Fairy.

"There are realms of dark magic even beyond my reach," he tells her. "Time runs differently there and nothing makes sense. Anything's possible."

A moment later, the mysterious figure strolls into the shop, tosses back that hood, and we see at last who it is that is slated to kill Emma:

Over in the Alt-EF, Regina and Emma stroll to the lake to meet Rumple, who dutifully passes over the magic bean before he giggles off upon his merry way.

Just as they open up the portal, an arrow splits the air and they turn to see Robin, who is intent upon stealing from them. Emma calls to her to go but Regina, spellbound, moves toward Robin as Emma helplessly watches the portal close.

Despite the inconsistencies, I'm giving this one a full five storybooks:

Unlike previous hiatus episodes, this one doesn't end an arc, and it also didn't end with a tearjerker or a heartwrencher. Gideon was a good plot twist, and I'm curious to see where they go with that. My thoughts:
All in all, a solid winter finale, if a puzzling one. What did you think? Are you jazzed for the rest of the season?
By Ellie DeLano - December 05, 2016