My Dublin Diary: Odds And Ends 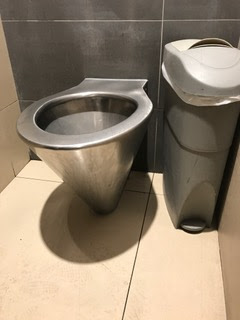 One of the true joys of travel is discovering all the little differences, in people, in language, in the way the people live their day-to-day lives. This post is a collection of some of the oddities (at least to an American who isn't much of a world traveler - yet) that I observed during my time in Dublin.

First of all, the whole toilet thing. That's a typical public toilet and in most places I went they were like this - all one piece without a separate seat. I guess Irish men are trained not to splash or something. No arguments about leaving the seat up or down in Ireland.

And speaking of toilets, most of them had two flush buttons. I assume this is for "liquid" and "solid" but I had no idea which button was which and none of them were ever marked. 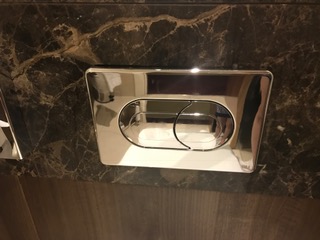 That's the flush button for the toilet in my hotel. This is actually the second picture I took. The first one was taken straight on, and when I reviewed it I realized it showed my fully naked body just perfectly in the chrome. This is a PG-rated blog, so I deleted that thing in a nanosecond, put some damn clothes on, and re-took it from another angle. Anyhow, I have no idea which button I was supposed to push, and I was too embarrassed to ask. Both of them seemed to release a huge amount of water, so I can't imagine it made too much of a difference. 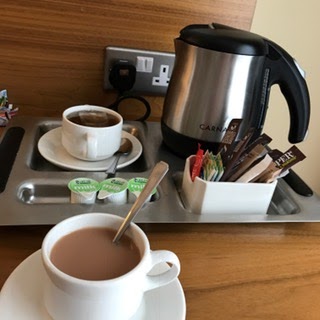 This setup was waiting for me in my hotel, and from what I can see of the listed amenities in most hotels in the area, this is common. The kettle heated water in about 30 seconds flat, and I had fresh, hot tea every single morning. As a non-coffee drinking tea lover, this was pure heaven. For those of my readers who take this for granted, you don't know how good you have it!

Most US hotel rooms only have coffee (if they have a coffee pot at all), or at the very most, a stale bag or two of tea wrapped in plastic that will taste terrible. You'll get powdered creamer with it that's chalky and horrible, and when you use the coffee pot to heat the water, your tea will taste like residual coffee. Bleh. 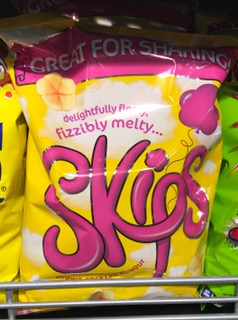 These are prawn chips. "Fizzibly melty" prawn chips. I have never in my life had a chip that was "fizzibly" or "melty" and I couldn't bring myself to spend the money to try it. Leave that crap to Andrew Zimmern.

Another oddity I observed in Dublin was the fact that everyone dressed like it was Antarctica. Except for their hands. Normally, the weather in Dublin in late November is cold and raw (they get 150+ days of rain a year on the eastern coast). I got really lucky and had wonderful weather. It was 49 degrees farenheit during the day and dropped to a low of 39 on the overnight, so while it was chilly in the evening, it never even got to freezing.

You'd never know that if you were out and about, though. I wore a fleecy jacket (like a North Face jacket) and a scarf and I was fine for the duration of my visit, but the Dubliners were all in puffy coats or pea coats buttoned to the top, swathed in scarves, hats on heads, looking like they were heading out into the icy tundra - but without gloves. I mean, almost no one wore gloves. I carried a pair in my pocket for the nighttime, but I never put them on because I was sure it would mark me as a tourist.

Here's a not-so-odd thing, I guess. More of a sad kind of thing. 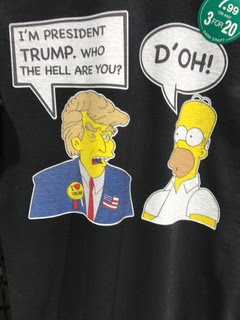 In a tee shirt shop 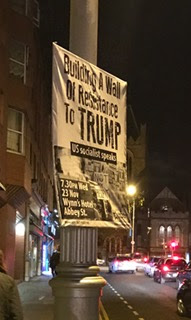 On the streets of Dublin

They're all talking about us over there, and the general consensus is (at least on the news programs and from what I overheard on the streets) that we are all off our rockers. I was on the bus tour with people from many different countries when the tour guide jovially asked the Americans to identify ourselves. There was an American couple a few seats away from me, and we all looked at each other and just kept mum. The tour guide laughingly said, "It's all right, America. We love ya! How's that new President working out for ya, then?" The entire bus burst into loud, raucous laughter and it just made me sad. I have never, ever, been embarrassed to tell anyone that I'm an American before. I hope I never am again. 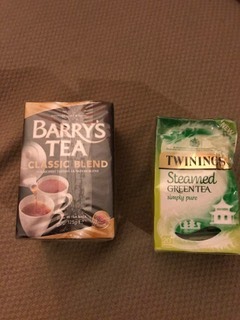 This is the best damn tea in the history of ever. I've been drinking Barry's tea for a while now, but Wegman's only has the green and the red box (along with decaf). I've never seen the black box before, and it is amazing. The perfect blend, not too bitter, not too weak. And the Steamed Green Tea? The stuff is absolute magic if you're feeling under the weather. It's got a fresh, fragrant but mild flavor and it was better than mom's chicken soup for my head cold - the one I got courtesy of all the freaking sneezers on the plane.

Oh well. Such is the life of a world traveler. I didn't find out all of Dublin's secrets, so I guess I'll just have to go back. And I will. I can't wait to see the rest of the country, while I'm at it. I've got a serious case of wanderlust now, and I'm going to try to indulge anytime that I can.

Thank you, Dublin, for everything.