My Christmas Was Saved By Looking Through My Daughter's Eyes 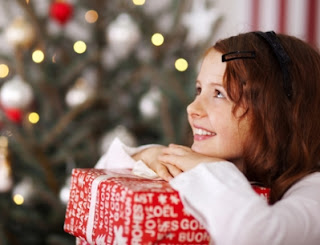 The first Christmas after my daughter was born was a rough one. Normally, Christmas is a joyful time for me - that tree goes up before the crumbs of the Thanksgiving turkey are being scraped from the plates, and I used to go whole-hog on the house, decorating it to a ridiculous degree.

Just the year before we had moved into our dream home, and held a Christmas housewarming that I'd exhausted myself preparing for. I didn't care. I was six months pregnant with our long-awaited (and medically fought for) first child, I had a beautiful new home, and all was right in my world.

And then, just a month after Christmas, the world shattered around me when I discovered my husband's girlfriend. I was ten weeks away from giving birth to Anna, and after a lot of turmoil, a change of jobs for both of us, and a never-ending storm of tears (mine), denial (his) and stops and starts, we were finally on our way to rebuilding our marriage.


Now it was the second week of December, and I still hadn't put the tree up. He was genuinely puzzled by the way I kept putting it off, and finally told me as we laid in bed that night that it really needed to get done, and he'd do it all himself if I was too tired. He assumed the motherhood thing was dragging me down, but he couldn't be further from the truth.

I finally confessed, with a great deal of tears and hiccupping, that I just couldn't feel Christmas. All I could feel was pain as I remembered how he'd held me on Christmas Eve as we looked at the lights on the tree, talking about how wonderful it would all be after the baby arrived, how Christmases would be full of children's laughter and joy and then someday grandchildren as we envisioned our family stretching on before us. I reminded him of how I fell asleep in his arms, happier than I had ever been. And the day after Christmas, he got back to the office and emailed his girlfriend to tell her how much he missed her.

He listened to it all with a great deal of shame, and he finally pulled me down to rest my head on his shoulder.

"We should put the tree up," he said quietly. "For Anna."

But I knew that's not what he meant. Anna was eight months old. She wouldn't even notice if we didn't have a tree. What he meant was that putting the tree up would be a return to normalcy. A return to the "us" we used to be back when we felt like celebrating at Christmas.

But we weren't that us. He'd seen to that, and so had motherhood, for that matter. From the moment they yanked her, squalling and kicking from my body, my life had changed irrevocably.

Something shifted and slid into place with his words, and while I realized that Anna wouldn't know if we didn't put up a tree now, she might ask about it someday. She might want to know what her first Christmas was like, and I refused to let that be a morose memory to be dragged out with an apology.

So we put up the tree, and as I held her, he switched on the lights. Anna's mouth formed a perfect "o", and a thousand, thousand sparkles danced across her face, settling in her eyes. She let out a squeal of pure joy, leaning out of my arms as she tried to touch the tree. I moved her closer, letting her stroke the needles, touch the lights, stopping her from pulling off ornaments with a laugh.

And it felt like Christmas, because I saw it all through her eyes.

A year later, I leaned on her again, as my mother was suddenly and gravely ill just a few days before Christmas. On Christmas night, I turned the tree on after my husband went to bed, and I carefully lifted her from her crib, holding her in my arms on the couch and losing myself in those twinkling lights, as I waited for the call that told me my mother was gone. Despite the grief, despite the shock, with her in my arms, it still felt like Christmas.

She was followed by a brother two Christmases later. My husband walked out the door seven years after that, and the next Christmas was a far cry from the lavish Christmases before. I was working two jobs and decorating the entire house was just too much to add to my overflowing plate. I could only afford a $29 fake tree from Wal-Mart that stood a little over four feet tall, but it did the trick.

I still had some leftover lights for the outside of the house, and after they came back from their Dad's on Christmas Eve, we settled in on the couch to watch Polar Express in the dark, with only the lights of that tiny tree glowing softly in the background. That movie is a Christmas Eve tradition for the three of us now, and just like the hero boy in the movie, I have learned to believe because my children believe - even now as they grow older - in the enduring power of twinkling lights and Christmas Cheer, and peace on earth.

Or my little corner of it, anyway.