Would you look at that? I mean, I know the panorama skews it a bit, but damn. Pics really don't do this place justice, but here's a few anyway:


Howth sits on the Howth Head peninsula, and is the 2nd largest port in Ireland. It's known also for its amazing footpaths, some of which are quite challenging. I didn't have time on the bus tour to take the grand hike, but I plan to come back someday and do just that.

One of the more colorful stories associated with Howth is that of the lady pirate, Gráinne O'Malley, who was rebuffed in 1576 while attempting a courtesy visit to Howth Castle, home of the Earl of Howth. In retaliation, she abducted the Earl's grandson and heir, and as ransom she exacted a promise that unanticipated guests would never be turned away again. She also made the Earl promise that the gates of Deer Park (the Earl's demesne) would never be closed to the public again.

The gates are still open to this day, and to honor the lady pirate, an extra place is always set for any unexpected guest during formal dinners in the dining room.

On the drive out, I saw my dream home: 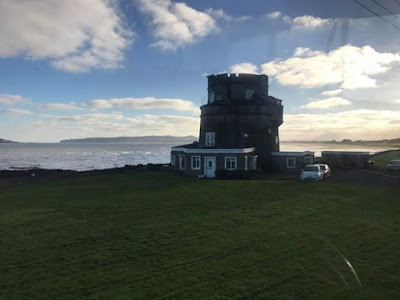 As well as the Portmarnock Sphere, a huge sundial set right on the coast in Portmarnock. 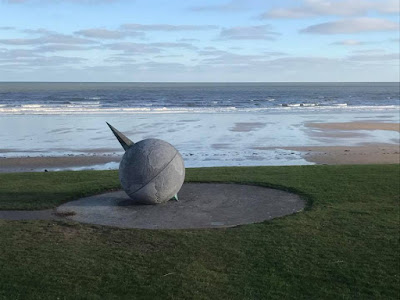 Oh, the day was glorious. The air was fresh and slightly chilled, the hot tea from a local shop was the best I've ever tasted, and I stood there looking over the rolling Irish Sea thinking. . . this was worth it. The whole trip was worth it for just this. And now I leave you with thirty seconds of Howth. Enjoy.