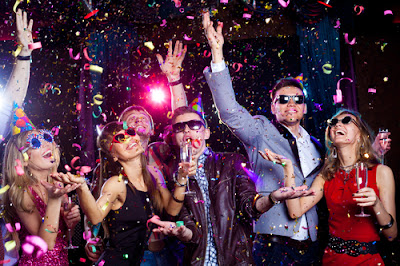 I don't think I've ever been so happy to see a year end, have you?

I mean, honestly! Between the election and all its bile, the massive amount of celebrity deaths, the terror attacks all over the world, Russia dabbling in our election. . .

It's been a hard, angry, generally terrifying year.

But there have been good things, too. For instance:

Global malaria deaths are down 60%, Thailand became the first country in the Asia-Pacific region to eliminate mother-to-child transmission of HIV and syphilis, ebola was eradicated from west Africa, and measles has been eradicated from the Americas.

Closer to home, colon cancer, dementia and heart disease are all on a big decline in the US and many wealthier nations (let's get that one spreading, shall we?)

In Texas, a group of inmates broke out of a holding cell to save the life of a corrections officer

In the US, the number of cigarette smokers has dropped by 8.6 million since 2005, and public smoking bans have conclusively improved health in 21 nations since their implementation.

Over 800 Boko Haram hostages were rescued by the Nigerian Army

Michael Phelps broke a 2,000 year old Olympic record and who can forget New Zealand's Nikki Hamblin's show of true sportsmanship at the Olympics?

Despite what careless news outlets like to scream at you, the jobless rate in the US reached a low not seen since before the recession.

So really, even if you aren't a Cubs fan, the year hasn't been all bad. We've still got chocolate, puppies and kittens, bacon, music, good books (ahem) and every single day we all have a chance to make 2017 better, from the moment we open our eyes. Let's not get so mired in fighting what's wrong around us that we can't treasure all that's gone right.

And with that, I'll leave you with the internet star of 2016, Chewbacca Mom, reminding us that it's the little things (and not just the big celebrity stories) that make a life.

Email ThisBlogThis!Share to TwitterShare to FacebookShare to Pinterest
Labels: Holidays