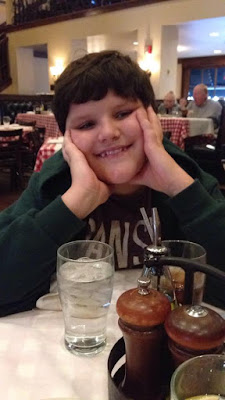 Today is his last day of twelve. Tomorrow I have a teenager.

In all the months I carried him, dreamed of him, planned for him, I could never have imagined what he ended up to be. This is true of both of my children - being so much more and so overwhelmingly a part of the very fabric of my soul - you can't imagine that until they're sleeping in your arms, or taking that first step, or reading that first word.

All of those milestones came later, and harder for him. But they came. And some of that was me, and some of that was his teachers and therapists and his older sister showing him the way. But most of that was him. His perseverance, his sheer determination, his unfailing sunshine smile after a storm of frustrated tears.

I no longer have a child with autism. I have a son, who is a young man, and he has autism.
He is growing more autonomous in so many ways, and still stubbornly clingy in others. He's still holding his own in school - not an honor student but he's getting by with accommodation. He likely won't drive at sixteen, but maybe twenty? Twenty-five? Or never. He likely won't go to college, but he will go to trade school. Will he land a paying job? I hope so. Will it pay a living wage? And if so, will he truly be able to live independently? Ever?

So I live in the known of the now. I know I've never met anyone in my life with more persistence. I know that he's incapable of hating, or holding a grudge. I know that he is innately kind, unfailingly helpful, and loves with his whole, big heart. The challenges he faces - and forces us to face - have made us all better, more patient, more tolerant people.

There is no day so bad, no life event so miserable, no calamity so unbearable that he can't push aside with one over-exuberant bear hug. He tells me I'm beautiful at least three times a day, and he means it. And I feel it when he says it.

And he is my beautiful, beautiful son, no longer a boy, but still with all of the wonder and acceptance of a child. In so many ways, he's who I want to be when I grow up.