That Time I Almost Died - From A Watermelon 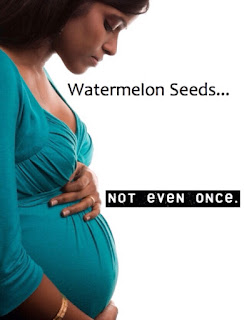 When I was five, my family had a fourth of July barbeque, with all the typical fourth of July sort of foods: BBQ chicken, burgers, hot dogs, cole slaw, potato salad - and watermelon.

I was eating it all with gusto, especially the watermelon. It took me a while to eat each piece, however, because I had to carefully, meticulously pick out each and every seed.

You see, I had older brothers. And older brothers delight in torturing their younger siblings. Not long before that day, I had been informed by one (and affirmed by the other) that the swallowing of an apple seed would cause an apple tree to take root in my stomach, growing until it burst through my skin. This I believed like God himself had engraved it on a stone tablet for me.

So when I saw the seven visible seed in my slice of watermelon, I started picking. Then someone bounced a ball too close, knocking over my drink and after dealing with that calamity, I went back to eating my watermelon. It wasn't until I ate the whole slice that I saw the six watermelon seeds on my plate.

Oh, God. My five measly years of life flashed before my eyes, and it didn't take long. I immediately ran to the bathroom, wishing I could throw up but not sure at all as to how to bring that about. When I realized that I wasn't even close to puking, I sorrowfully accepted my fate and took to my bed, surrounded by all the stuffed animals who would accompany me into the afterlife.

My parents finally realized I was nowhere to be found, and discovered me in bed, nearly catatonic with the knowledge of my impending demise. It took over an hour and a storm of hysterical tears before they got the story out of me. Even after multiple apologies (sprinkled with derogatory name calling) from my brothers, I cautiously adopted a wait-and-see attitude about my potential grisly death.

Well, here I am. Brian and Kevin, you are asshats. There, I said it.

And I love you both, to the moon and back.

What about you? What did you believe as a child that turned out to be total hogwash?